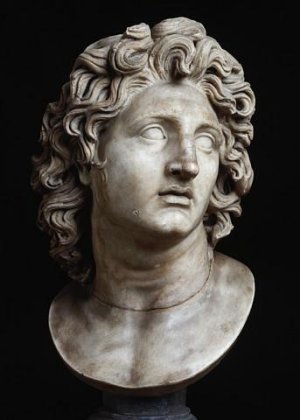 He was a pupil of Aristotle , one of the foremost philosophers* of his time. He studied literature and learned to play the lyre.* He was fearless and strong as a young man.

His father bought the horse and Alexander named him Bucephalus (bue SEF uh lus). His father said to him, "You must find a kingdom worthy of you, my son. Macedon is too small for you."

He later built a city and named it after his horse, the city of Bucephala.

Alexander became one of the greatest generals in history. When he conquered the Persians he honored their soldiers and commander who had died in battle. When he had won a battle, he combined the remaining soldiers of the enemy with his army to form a greater army. He usually did not allow his soldiers to mistreat the conquered people.

He suffered along with his soldiers when they were at war. If they didn't have water or food, he would not accept food or drink either. When the soldiers were walking, he walked also and refused to ride or be carried. He set an example for his troops.

Once he was trying to capture a city which was on an island in the Mediterranean Sea. It was near the land, so he decided to build a bridge to it. His soldiers put down trees, reeds, and rocks and they began to build a peninsula* out to the island. The people of Tyre did everything they could to stop the soldiers, but in seven months Alexander's troops had built a bridge to the island and with the help of a naval fleet conquered the city.

During his life he conquered the then-known world. He controlled Greece, captured Persia and Egypt and built a city in Egypt. He named it for himself, the city of Alexandria. He was the king of Macedonia and a pharoah in Egypt. 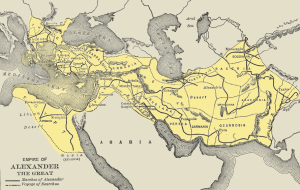 He was only 33 years old when he died. Some say he was poisoned. It is just as likely that this great general was defeated by a mosquito because others believe he died of malaria.*

This biography by Patsy Stevens, a retired teacher, was written in 2003.
Take the online test

Other Activities
View a slideshow about Alexander the Great

philosophy
Pronunciation: 'fə 'los ə fee
Function: noun
1 : the study of the basic ideas about knowledge, truth, right and wrong, God, and the nature and meaning of life
2 : the philosophical teachings or principles of a person or group as Greek philosophy today....

malaria
Pronunciation: 'mə 'ler E ə
Function: noun
: a disease caused by protozoan parasites in the red blood cells, passed from one individual to another by the bite of mosquitoes, and marked by periodic attacks of chills and fever

Alexandria (audio)
Engines of Our Ingenuity.

Books
Press "Go" to search for books about Alexander the Great.
Library

The Story of Alexander the Great
by Robert Steele (public domain, 1894, full view)
(Click on the "+" sign to make the print larger.)

Alexander the Great: The Life of a King and Conqueror
by Rob Shone, Anita Ganeri, Chris Odgers (selected pages)

The Conquests of Alexander the Great
by Alison Behnke (selected pages)