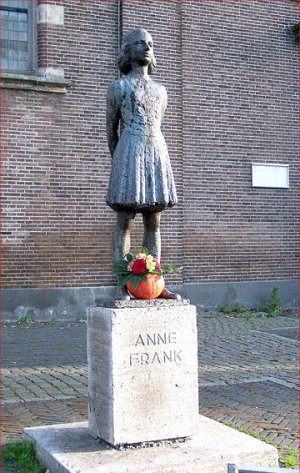 Statue Anne Frank in Utrecht, made by Pieter d'Hont in 1959 and placed in 1960 at the Janskerkhof. Photo by Wikipedia user Brbbl

Anne Frank was born to Otto Frank and his wife Edith on June 12, 1929. They named her Annelies Marie. She had a sister Margot who was three years older. They were a Jewish family living in Germany. Their families had lived in Germany for centuries.

By 1932 Adolph Hitler had risen to power in Germany and instead of enjoying a democracy, the German people now suffered under the rule of a dictator. Hitler blamed the Jews for all the problems in the country. Otto realized it was becoming unsafe for his family in Germany and moved them to the Netherlands. He set up a company in Amsterdam making a product that the women used to make homemade jam. It was called Opekta. (Pectin* is derived from fruits and will cause jelly and jam to jell. In America you can buy a pectin product called Sure Jell.)

The family was safe for a while, but then in 1940 the Germans invaded the Netherlands and began to arrest and persecute the Jews there. They put restrictions on the Jews and made them wear an identifying yellow star on their clothes. They could not own a business. They could not ride a bicycle. Life became very hard, and the Jews feared for their lives.

Margot, Anne's sister was called to report to a work camp in Germany. The family had been planning a hiding place, but with Margot's call-up they knew they had to hide immediately. And so they did. The date was July 6, 1942.

The first thing they did was make curtains to prevent anyone from seeing in. An eighth person, Fritz Pfeffer, an older man, a dentist, arrived in November and would share a room with Anne.

Father Voskuijl made a movable bookcase to hide the door through which they entered their quarters.

There were four people who helped them during the two years and 30 days they were in hiding. Miep Gies, Victor Kugler, Johannes Kleiman and Bep Voskuijl provided food for them, and at great personal risk to their own lives visited daily and brought news from the outside world.

The people in hiding must be very quiet when the warehouse workers are at work downstairs. They can move around when the men are gone for lunch, and at 5:30 in the afternoon when the workers leave the building Anne and the others are free to go downstairs into the office area. Anne calls it their "nightly freedom".

The Franks had brought school books for an extended stay and library books are brought to the group weekly. They spend a lot of time reading, studying, and working correspondence courses.

Anne writes in her diary.* She creates an imaginary friend "Kitty" with whom she shares her innermost thoughts in her writings. Sometimes she writes short stories. After hearing on a radio broadcast that there would be a collection of the diaries and writings made during the war, Anne begins to think about making her writings into a book. After a lot of thought she decides she will call it "Achterhuis" (Secret Annex). 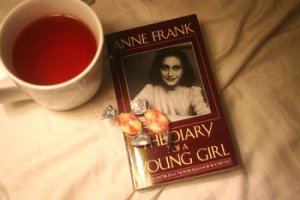 She begins rewriting her entries, leaving out some very personal items she would rather not share. For over two months she works rewriting her diaries.

On August 4, 1944 the people in hiding were discovered. Someone, they never found out who, betrayed them and a Secret Service officer and three men of the Dutch police force came up the stairs, entered with guns, and herded them away to jail. The two men who had been helping them were also arrested and taken to the city prison. The two women helpers, Miep and Bep, were left behind. They went into Anne's small room. Her diaries were scattered all over the floor. They collected them and Miep kept them.

The eight people are taken to a transit camp, Westerbork. From that camp people are taken to extermination and concentration camps.* During the month they are there they have to break up old batteries. On September 2, 1944 their names appear on the list of people to be moved. They are put on freight cars and three days later they arrive at the Auschwitz-Birkenau concentration camp. The people in the freight cars were divided. Men and women were separated and then they were divided into groups; one group would go to labor camps, and those who could not work would be killed in the gas chamber.

By the end of October Anne and her sister Margot are transferred to another camp, Bergen-Belsen. They both become ill there and died of typhus in March of 1945. They died just a few weeks before the British Army arrived and freed the prisoners.

The four helpers survived the war and so did Anne's father Otto Frank. He searched desperately for word of the fate of his family. Finally in July he met two sisters who witnessed the death of Anne and Margot.

After Otto learned of the death of his daughters, Miep gave him the pages of the diary she had been saving. He was surprised at the depth of her writings. This was an Anne he never knew. He honored her wish to have her writings published as a book. First the book was published in the Dutch* language, then German, French, and English. The book was made into a stage play, then into a film.

Today when you see the word "Holocaust"* it usually refers to this time in which the German Army systematically* killed nearly 6 million Jews. People need to learn about the Holocaust and the reasons why it happened, lest periods of hatred and discrimination cause a similar genocide.* Some say it never happened at all, but we know it did because there are too many witnesses and survivors who lived to tell the world about those darkest of times.

Today if you visit the site of the Bergen-Belsen concentration camp you can see a memorial to Anne Frank and her sister Margot. 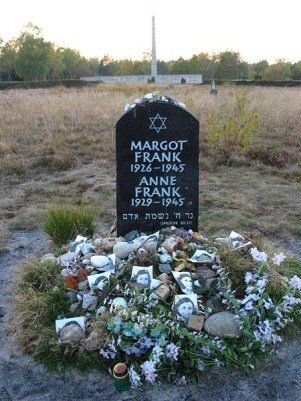 Other Activities
View a slideshow about Anne Frank

Holocaust
'hoe-lə-cost or hau-lə-caust
Function: noun
1 : a sacrifice destroyed by fire
2 : a thorough destruction especially by fire
3 often capitalized : the killing of European civilians
and especially Jews by the Nazis during World War II

concentration camp
Function: noun
a camp where persons (as prisoners of war, political prisoners, or refugees)
are detained

Dutch
Pronunciation: 'dəch
Function: adjective
of or relating to the Netherlands, its inhabitants, or their language

diary
Pronunciation: 'die-ə-re
Function: noun
a daily record especially of personal experiences and thoughts;
also : a book for keeping such a record

pectin
'pek-tən
Function: noun
any of various substances in plant tissues that dissolve
in water and produce a gel which is the basis of fruit jellies;
also : a commercial product rich in pectins

Article: The Lessons of Anne Frank

A Teacher's Guide to the Holocaust

Lessons From the Holocaust
Lesson Snips.com
(You must register to access lessons.)

At biography.com search for Anne Frank.
Scroll the panel for the "Video & Audio Results".