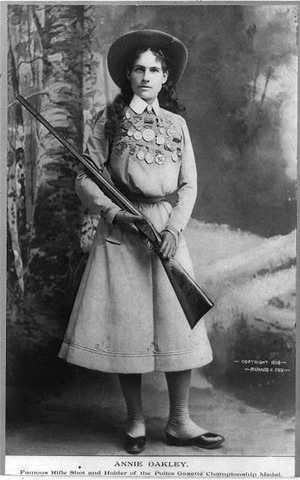 Annie Oakley (Phoebe Ann Mozee, sometimes spelled Mosee or Moses) was born to Quaker parents in Ohio. She had six brothers and sisters. When she was six years old her father died due to exposure to snow and freezing weather. Her mother remarried and had another child, then became a widow again. She could not take care of all the children, so she sent Annie to live on a "poor farm". From there she was loaned out to work for a family, but they were very cruel to her. She referred to them as "the wolves". Sometimes they would lock her out of the house when it was snowing outside. She spent two agonizing years with them, then returned to the county poor farm.

She was reunited with her mother when she was 15 years old. Her mother had remarried, but times were still hard for the family. They were about to lose the farm. Annie taught herself to shoot a gun, and she became such a good shot she was able to hunt small animals and sell them. When she had accumulated $200, she gave it to her mother to pay off the mortgage on the farm.

One of the favorite pastimes of that age was attending shooting matches. Frank Butler, an Irish immigrant, was one of the sharpshooters.* A match was made for him to compete against Annie, a petite* woman who was just 5 feet tall and weighed only 100 pounds. The man who organized the match was a hotel owner who regularly bought game that Annie shot and sold him for his patrons to be served in the hotel's dining room. They each hit 24 birds in a row, then Frank missed his next shot. Annie successfully made her 25th shot and won the match. Frank was very attracted to this young woman who had bested him on the shooting range and offered her tickets to his next show. A romance developed and they were married about a year later. 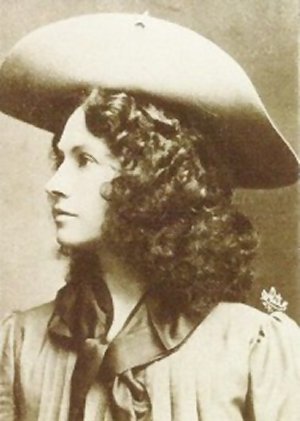 It is possible the Oakley name came from Annie's paternal* grandmother. However, some sources say the name "Oakley" was not a family name, but was the name of the neighborhood of Cincinatti where she and Frank lived when they first married.

Annie Oakley, and she and Frank started traveling together giving shows. Some of the shows were off-color and the women were scantily dressed, but Annie was not like that. She sewed her own costumes with skills she had learned at the poor farm, and her costumes were very modest and covered her completely.

Frank had top billing, but he soon realized Annie was a better shot than he was and also a better show person. So he stepped aside, gave her top billing, and became her manager. They took a job with Sells Brothers Circus and spent 40 weeks traveling with them. The season ended in New Orleans.

Frank was also a professional dog trainer and during their careers Frank and Annie used their pet dogs in their shooting acts, including shooting an apple off the head of her dog Dave. Annie was also did a lot of work for the Red Cross and used her dog when she worked there. He became famously known as the "Red Cross Dog".

It just happened that Buffalo Bill Cody came to town that week with his "Wild West Show". Annie had hoped to join his show, but Cody already had a sharpshooter, and he turned them down. Later his steamer ship sank and his sharpshooter lost his guns in the mishap, so Cody agreed to a tryout with Annie and Frank. Before he even got to see her shoot, his business manager saw her practicing and was so impressed he hired her on the spot. 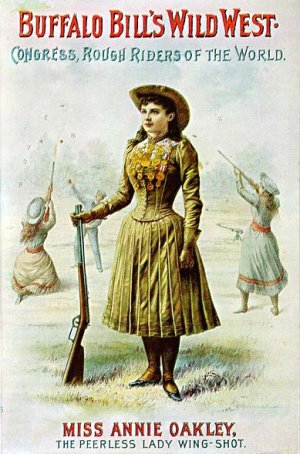 Cody took his show to London on the Queen Victoria ship filled with all the animals he used in the show; horses, cattle, and buffalo, along with all the people who were in the show.

Another woman sharpshooter, Lillian Smith, was touring with them. She was 15 years old, loud and unrefined. Annie was now 26. She told people she was younger because she felt she could compete better if she were nearer Lillian's age. The two women got equal billing. There were many royal visitors in attendance and the Queen called both women to her box to meet them.

Competition between the two women was intense. Lillian shot poorly that day and Annie did well. It wasn't too long before Annie left the Wild West Show and Buffalo Bill Cody. When people asked her why she left she replied, "The reason for so doing would take too long to tell".

Buffalo Bill wanted Annie to go with him to Paris, France, and she went back with the show. Lillian didn't go. For three years they toured Europe.

They returned to Chicago where the Columbian Exposition was in progress in 1893. Buffalo Bill set up his show right next to the World's Fair and he drew larger crowds than the Exposition.

Thomas Edison had invented the movie camera, and he invited Annie and Frank to make a test movie with his new camera. It was during this time when movies began to become popular, that people started going to the movies instead of the Wild West Show.

In 1901 Annie was injured in a train wreck. Her spine was hurt, and she was no longer able to do all the things she could previously do. She left the show.

A play was written for her and she starred in it.

Then in 1903 tragedy entered her life. A burlesque* actress, trying to capitalize* on Annie's name, claimed to be Annie Oakley. The woman was accused of theft and cocaine use. William Randolph Hearst, newspaper publisher, printed that Annie Oakley was in prison because of theft and drug use.

Annie had worked hard for years to have a good reputation, and this woman by impersonating* her, was smearing her good name. She had to do everything in her power to clear her name and show that the report was false. She sued newspaper after newspaper, 55 in all, and pursued them for six years. She won 54 of the cases. Hearst paid her $27,000, but she lost money because the pursuit had been so costly. Hearst hired people to try to find something in her past they could use against her, but they found nothing.

Annie performed in a new Wild West Show, but the crowds were smaller now, and she retired in 1913. She and Frank did an exhibition show a couple of years before they died.

She taught thousands of women how to shoot, and she thought women should be able to protect themselves.

Interestingly, she was not in favor of women having the vote, and was not very politically active. She did believe women should get equal pay for equal work.

She was involved in a car accident and suffered a broken hip and ankle.

Annie Oakley died at age 66 by natural causes. The doctor gave the cause of death as "pernicious anemia". Some people have conjectured that she may have died of lead poisoning due to the lead in the bullets she used for years. Frank, her husband of 50 years, died 18 days later.

A musical called Annie Get Your Gun, the story of her life, was later produced on Broadway and on film.

paternal
Pronunciation: pə-'tərn-əl
Function: adjective
related through the father as a paternal grandfather

burlesque
Pronunciation: bər-'lesk
Function: noun
1 : a written or dramatic work that makes fun of something
by making it appear ridiculous
2 : theatrical entertainment consisting of comic skits and dance

capitalize
Pronunciation: 'kap-ət-əl-'Iz, 'kap-təl-
Function: verb
to use to help oneself as to capitalize on an opponent's mistake

impersonate
Pronunciation: im-'pərs-ən-'At
Function: verb
to pretend to be some other person as to impersonate a police officer

Annie Get Your Gun
musical show


At biography.com search for Annie Oakley.
Scroll the panel for the "Video & Audio Results".