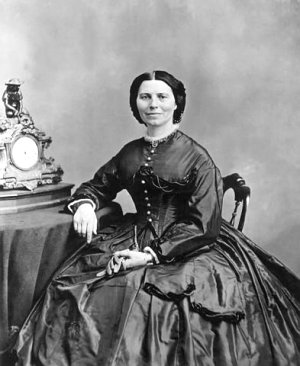 Clara Barton was born to a farm family in Oxford, Massachusetts. Even as a child, she wanted to help others. She treated injured pets and cared for her brother when he suffered from a fall from a barn.

She was homeschooled by her brothers and sisters. She was always trying to learn new things.

While she was still a teenager she became a teacher and taught school for about fourteen years. She was teaching at a private school where she was paid by the parents, but it made her sad to see other children whose parents could not afford to pay a teacher. So she offered to teach those children without pay if the town would provide a place for her to teach. She soon had 600 students!

Her next job was working as a clerk in the Patent Office* in Washington, D.C. They wanted to pay her less money because she was a woman, but she insisted they pay her a wage equal to what they were paying the men clerks.

When the Civil War started, she wanted to help the soldiers, so she resigned her job at the Patent Office. She asked people to donate money to help, and she began making bandages out of sheets and towels to be used for the wounded soldiers.

She got permission from the War Department to go to the front lines of the battlefield to care for the soldiers herself. She was called the Angel of the Battlefield. She almost lost her life, but she continued to serve. She comforted the soldiers, bought and prepared food for them, and searched for missing soldiers. In the years following the Civil War she was able to reunite thousands of soldiers and their families. 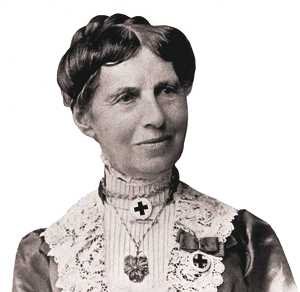 Next she joined the relief* effort in the war between France and Prussia. In Europe they had an organization called the International Red Cross. She saw the good work they were doing, and when she returned to America three years later, she began working to get a Red Cross established in the United States. She gave speeches and talked to people in the government. After eight years of hard work she formed the American Red Cross and served as its president for 23 years.

At first the Red Cross only served soldiers, but Clara saw that others needed help when floods, earthquakes, and other disasters* occurred.

Today we see the Red Cross at work when we have disasters such as the attack on the World Trade Center in 2001, and most recently the disaster in New Orleans and along the Gulf Coast due to hurricane Katrina in 2005.

The dedication* and generosity of one woman, Clara Barton, has had far-reaching effects.

Other Activities
View a slideshow about Clara Barton

patent
Pronunciation: 'pat-ənt
Function: noun
1 : an official document granting a right or privilege;
especially : a writing granting to an inventor for a term of years
the only right to make, use, or sell his or her invention
2 : the right granted by a patent

relief
Pronunciation: ri-'lEf
Function: noun
aid in the form of money or necessities for people in need
: a program through which such aid is distributed

disaster
Pronunciation: diz-'as-tər
Function: noun
a sudden great misfortune; especially : something (as a flood or tornado)
that happens suddenly and causes much suffering or loss

Clara Barton, Angel of the Battlefield

Clara Barton
from About Famous People.com

The First Red Cross Ambulance (audio)
Engines of Our Ingenuity.

At biography.com search for Clara Barton.

The Story of My Childhood
by Clara Barton (public domain, 1907, full view)