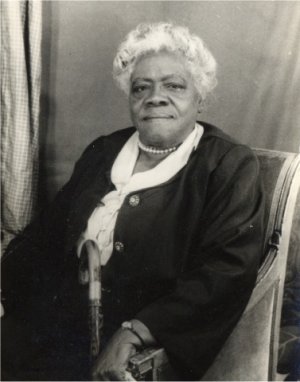 Mary Jane McLeod was born to slaves on a plantation in South Carolina. Her parents were owned by different masters. Before their marriage her father Samuel had to work to "buy" his bride. Samuel and his wife Patsy had 17 children in all. Sadly, while they were slaves the children were sold to other masters when they became old enough to work.

When the slaves were freed by the Emancipation* Proclamation Patsy's master gave her some land and the family planted a few acres of cotton. They eventually would be able to buy 50 acres of land. In 1875 Patsy gave birth to a daughter, Mary Jane, their first free-born child. She was their 15th child and there would be two more children born to the couple, but they felt that Mary Jane was going to do something great.

They had a Bible in the home, but on one could read it. Mary Jane was determined she would learn how to read.

A teacher, Miss Emma Wilson, was sent by the Presbyterian Mission Board to start a school for the colored children in that area. Although her father needed everyone to work in the fields, he agreed to let nine-year-old Mary Jane to to school.

The school was just a shack and she had to walk five miles to get there, but she didn't miss a day. After a year she could proudly read the Bible and poetry to her family.

When she began to learn numbers, she realized that her daddy and other uneducated farmers were being cheated when they sold their rice and cotton. When the master told them their cotton only weighed 400 pounds, they didn't know he was lying to them. She spoke up and her father was treated more fairly. Now that she could read and figure, their neighbors came to her for help.

After four years she got a certificate. Her father said he would send her for further schooling to Concord, North Carolina, but when the mule died, she knew they would not be able to afford the tuition. However, Miss Wilson had good news. Mary had been awarded a scholarship* ! A woman, Mary Crissman, a dressmaker in Colorado, had offered her life savings for one black child to attend Scotia Seminary. The year was 1887 and Mary Jane was 12 years old. She went away to school and she wouldn't see her parents again for seven years.

The hall where she would be living was a mansion. She never dreamed she would live in such a place. She felt so alone and frightened.

Mary had to work to help pay for her expenses, but she was happy working in the kitchen and cleaning the mansion.

After graduation she attended Moody Bible College in Chicago. She studied hard. She sang in the choir. She was working toward becoming a missionary in Africa, but her plans changed. There was not an opening for her in Africa.

She returned to her home in Mayeville and within a few days was teaching in Miss Wilson's school. This was where she belonged. She taught there for a year and then was sent to work in a school in Augusta, Georgia. There she learned how to run a school from Miss Lucy Laney, the school's founder.

With her salary she bought a house for her aging parents. The house even had running water. Her younger sister Hattie cared for them.

A friend introduced her to Albertus Bethune. He fell in love with her immediately and Mary began to love him too. She took him to meet her parents. They were married and she took the name Mrs. Mary McLeod Bethune. She kept her maiden name* to honor her father.

A son Albert was born to them. He was the 90th grandchild of her parents Patsy and Samuel McLeod.

Mary accepted a teaching position at a mission school. Her husband was not in favor of it, but he soon joined her. She still had dreams of building her own school. She heard of a great need in Daytona, Florida. Again Albertus did not want her to go, but she and little Albert went by themselves.

She had no money to start a school. In a dream she saw Booker T. Washington riding up on a horse. In the dream he handed her a huge diamond.

In Daytona she rented a house for $11 a month. She would have a school downstairs and she and her child would live upstairs. She began to ask people for money to start the school and there was a response.

She started the girls' school of 5 girls with minimal* supplies. Sticks of charcoal were used as pencils and she boiled berries to make ink. Tuition was 50 cents a week. Albertus joined her in Daytona for a while, but he didn't share her vision and they began to drift apart.

By the next year she had 100 girls, some of whom were boarding students. With the students living with her she needed more room. She found a trash dump she could clear to build her school. She raised the $15 down payment in pennies, nickels, and dimes. The land cost her $250.

She needed a patron to help her build and support the school. Several wealthy people wanted to help; John D. Rockefeller, Henry J. Kaiser, and James Gamble of Procter and Gamble donated liberally to her cause. Thomas White, producer of the White sewing machine willed the school $79,000.

Some people did not agree with her philosophy.* Her aim was to teach the girls reading, writing, and math, but she also taught them homemaking skills and how to sew.

There was no hospital available for the black community so she opened McLeod hospital in the original building where she had started the school. It only had two beds, but eventually expanded to a three-story 26-bed hospital.

Her school became an accredited* high school and two-year college. There was a working farm called The Retreat that helped the school survive financially. A woman named Flora Curtis bought vegetables at the farm. Over the years she spent about $20. She appreciated the kindness shown to her by the students. When she died they learned she had willed the school $80,000. Later a dormitory was named for her just as another building on campus had been named for Mr. White.

Mary worked with the NAACP and the Red Cross.

She had worked all her life. Friends urged her to take a vacation. She traveled to Europe.

Mary often used the example of the flower garden to illustrate equality. Flowers are many colors but they grow together in harmony in the garden. In Holland she was given bulbs of the black tulip and in Switzerland she saw a black rose for the first time. She was captivated* by it. She ordered black rose bushes for the college campus. The black rose became her trademark.* People called her "The Black Rose". 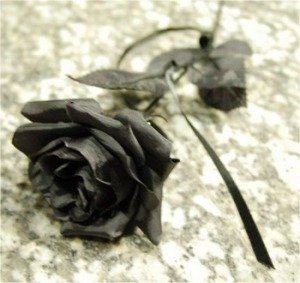 President Roosevelt appointed her as president of the advisory board of the National Youth Administration (NYA). In 1935 he created the office of Minority Affairs and appointed her to head it. It was the first time in history a black woman had served in a presidential administration. She had to move to Washington. That year she was awarded the NAACP Spingarn Medal. Mrs. Bethune and Eleanor Roosevelt, the president's wife became good friends. In 1945 after the President died Mrs. Bethune was named as a consultant at the conference to write a charter for the United Nations.

She was not in good health. She retired to The Retreat and college students came by and visited with her. Her son Bert had married and he was now a grandfather.

Mary McLeod Bethune died of a heart attack on May 18, 1955. She was nearly 80 years old. She had few possessions, but she left a rich legacy as evidenced by her will. 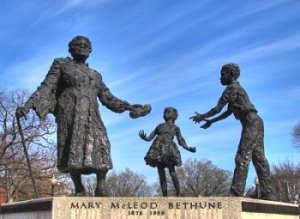 The facts in this story were taken from the book Mary McLeod Bethune: A Great American Educator (People of Distinction)
Take the online test

emancipate
Pronunciation: ih-MAN(t)-sə-pate
Function: verb
to free from someone else's control or power;
especially : to free from slavery

scholarship
Pronunciation: SKAHL-ər-ship
Function: noun
money given (as by a college) to a student to help pay for further education

maiden name
Function: noun
a woman's family name before she is married

minimal
Pronunciation: MIN-ə-məl
Function:adjective
relating to or being a minimum or least

accredited
Pronunciation: ə-KRED-ə-tid
Function: adjective
certified as in agreement with a standard as an accredited school

captivated
Pronunciation: KAP-tə-vAt-id
Function: verb
to be influenced or fascinated by some special charm

trademark
Pronunciation: TRADE-mark
Function: noun
something that identifies a person or thing

Research Links
Mary McLeod Bethune, "What Does American Democracy Mean to Me?"
listen to the radio broadcast, November 23, 1939

Touched by the Sun, Volume 3
by Stuart B. McIver (selected pages)