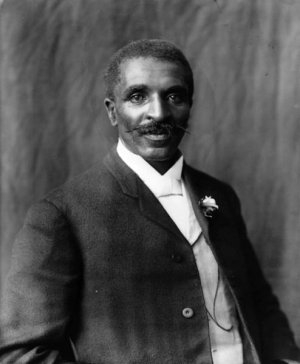 George Washington Carver was born in Missouri on the Moses Carver plantation. His parents were slaves. His father died right before George was born, then while he was still a baby, slave traders kidnapped him and his mother. Only George was returned to the plantation.

When he was a baby, he had a disease called whooping cough.* It left him sickly and he couldn't do hard work like the other slaves. His chores were cooking and sewing. He loved to work in the garden.

He taught himself to read. His family was so poor, he couldn't afford to buy a pencil, so he made a holder and used a pencil that was only 1/4 inch long.

He wanted to get an education. When he was 12 years old, he left home to attend a black school. There was only one teacher with 75 children in a small room. While other children played at recess, he studied. He studied at home before and after he did his chores. Soon he knew more than his teacher.

He wrote to a college to enroll and they accepted him, but when they found out he was black, they told him he couldn't attend.

After five more years, when he was 30 years old, he was accepted at a college in Iowa. He did so well, his teacher helped him to get a transfer* to Iowa State College where he studied botany.* He learned about plants and farming. He became the best botany student on campus. 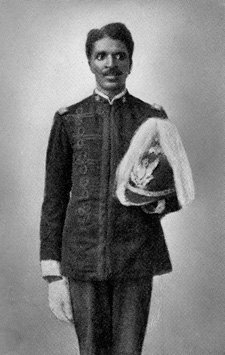 He did many things to earn money to pay for his expenses. He sold hominy which he had made, and sometimes he ironed clothes for his classmates. He found an old stove at the city dump and brought it home to cook meals for his friends. He used old wrapping paper for notebooks.

"Don't throw anything away," he would say. "Everything can be used again."

After he graduated, they asked him to teach biology* to the beginning students.

Later he was asked to teach at the Tuskegee Institute in Alabama.

Carver started studying diseases which were attacking the farmers' crops. He also did a lot of experimenting to find new ways to use different plants. He made more than 300 products from peanuts. He even made soap and ink from peanuts. From sweet potatoes, he made 118 products, including flour and candy. He made 75 products from pecans and even made a building material for walls from cotton stalks. He had many good ideas! 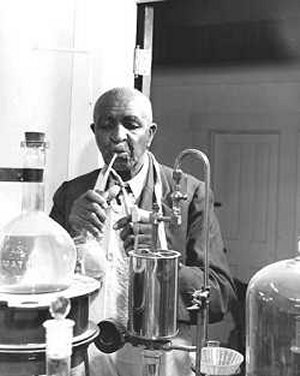 Carver at work in his laboratory

Later in his life, Thomas Edison offered him $100,000 a year to come and work for him, but he thought he could do more good at Tuskegee.

Money, stylish clothes, and fine cars were not important to him. He thought the truly successful person was the one who had learned to serve others.

He was one of the finest scientists the world has ever known.

(Some list Carver's birth year as 1864. His exact birthdate is unknown. We have listed it as 1860 because according to a Missouri 1870 census Carver was 10 years old at the time.)

whooping cough
Function: noun
a disease especially of children that is caused by a bacterium
and is marked by severe attacks of coughing often followed by a
shrill gasping intake of breath -- called also pertussis

transfer
Pronunciation: tran(t)s-'fər, 'tran(t)s-"fər
Function: verb
to move to a different place, region, or situation;
especially : to withdraw from one school to enroll at another...

George Washington Carver Lesson Plan
Lesson Snips.com
(You must register to use, a limited number of lessons free)

George Washington Carver color book
other links at the USDA.