Johnny Appleseed lived in the days of early America. He became a legend, and many stories were told about him. Some people do not know he was a real person. His name was John Chapman, and he was born in the state of Massachusetts in 1774. His father, Nathaniel, was a soldier in the Revolutionary War. His mother, Elizabeth, died when he was still a very young child.

When he grew up he made it his life's work to plant fruit trees in the developing parts of the country. He carried sacks of apple seeds with him and planted orchards throughout the Northwest Territory. The states of Ohio, Michigan, Indiana, and Illinois were formed from this area. His mission was to plant fruit trees so the settlers, as they moved west, would have something to sustain them as they tried to survive in the new land. 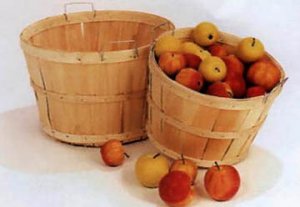 The empty basket
would hold a bushel

In 1802 he carried sixteen bushels of apple seeds down the Ohio River. He had two canoes lashed together to transport the seeds. Most of the time he carried the seeds in leather bags on horseback, or on his own back. He planted acres and acres of apples. Someone has estimated that during his lifetime Chapman planted enough trees to cover an area over 100,000 square miles!

Only one plant did he introduce to the countryside that turned out to be an invasive* plant. He thought the dog fennel plant had anti-malarial* qualities and planted it beside every homestead. Whether it really had medicinal qualities is debatable, but it tended to take over the area where it was planted and was considered a weed.

John was a good businessman, charging a few cents for the trees he grew. If someone couldn't pay, he would barter for clothing or food, or he gave the trees away without cost or told them they could pay him later. However, the money he collected was used to plant more orchards, or he gave it away to someone who was in need.

He dressed simply, wearing clothes he had traded for trees. Sometimes he cut a hole in a sack and wore it as a shirt. It is said he didn't wear shoes most of the time though sometimes he might find shoes that someone had discarded, and he would wear them. The two shoes he happened to be wearing might not match. Material "things" just did not matter to him. Once a soldier gave him a hat and he wore that. You see pictures of him wearing a pot on his head for a hat. He could use the pot to gather fruit and berries to eat.

He did not eat meat because he didn't want to harm any animals. If he saw an animal being mistreated, he would buy the animal and give it to another settler; someone more humane* who would care for the animal.

According to a Harper's Magazine article he did not prune nor graft trees, but looked upon the cutting of them as a kind of cruelty.

When he was invited to eat a meal with a family he never sat down until he was sure the children had enough to eat first. He was a kind gentle person.

John Chapman was a Christian and conducted his life in a Christ-like manner. He was a follower of a religious leader named Emmanuel Swedenborg. He would preach to the families he visited. He called it delivering news "right fresh from heaven".

One day a preacher came to the area where Johnny was working and in his sermon decried materialism* asking, "Where now is there a man who like the primitive* Christian is traveling to heaven barefooted and in coarse raiment?" After he had made the statement several times, John in his coffee-sack shirt stepped forward and said, " Here's your primitive Christian." The preacher quickly dismissed the congregation.

During the war of 1812 the British and the Indians were roaming the country killing the settlers. John went from house to house warning the people to take shelter and try to protect themselves. He traveled night and day to warn them, not stopping to eat or rest.

John Chapman died in 1845 at the age of seventy-two. He had spent 46 years planting trees across the country. The death of this extraordinary man was mourned by many. In the years since his death numerous honors have been given him. A postage stamp was made in his honor. A school was named for him, and an annual festival is held in Fort Wayne, Indiana as well as other cities. 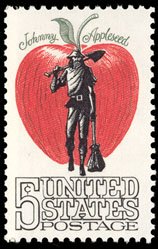 Read a review of a Fictional Story about John Chapman.

humane
hyoo MANE
Function: adjective
marked by sympathy or consideration for others

primitive
PRIM ət iv
Function: adjective
of or relating to the earliest age or period as the primitive church

malaria
mə LER e ə
Function: noun
a disease caused by protozoan parasites in the red blood cells,
passed from one individual to another by the bite of mosquitoes,
and marked by periodic attacks of chills and fever

The Story of Johnny Appleseed
at Tooter 4 Kids.com

Johnny Appleseed
listen to a radio broadcast "People in America"

The Story of Johnny Appleseed Song

The sun, the rain, and the apple seed: a novel of Johnny Appleseed's life
by (selected pages) Order here