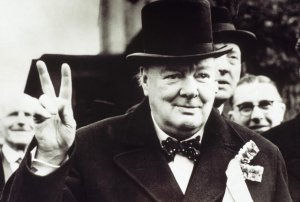 Winston Churchill was born in Blenheim Palace in Oxfordshire, England to Lord Randolph Churchill and Lady Jennie Churchill, who was an American.

Winston wrote about his mother in his book "My Early Life". He said she "always seemed like a fairy princess... She shone for me like the Evening Star. I loved her dearly - but at a distance" She was always too busy with her social life to be bothered with her child.

At age eight his parents enrolled him in St. George's, a boarding school at Ascot. He wrote to them that he was happy there, but actually he hated it and did not do well at all. His teachers thought he was "a very naughty boy", and he was frequently punished. He ranked last in his class and was considered lazy.

His headmaster said of him, "He is a constant trouble to everybody and is always in some scrape or other. He cannot be trusted to behave himself anywhere." 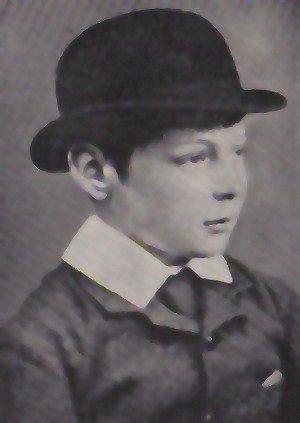 At age ten his parents removed him from St. George's and he went to a Brighton school run by the Thomson sisters. He was much happier there, but still did poorly in his classes.

He wrote letters to his parents, but they rarely answered them. He visited them at home during the Christmas holidays, and his mother made a trip in February to visit him at his school.

When he was eleven he became very ill with pneumonia. His parents, when they heard the news and thought he might die, finally went to see their son. Otherwise they didn't visit him, even when they happened to be in the same town as the school.

The highlight of his school year was the visit of his nanny, Mrs. Everest, whom he called "Wooms". She had been hired to care for him when he was only a few weeks old and had been his faithful supporter through the years. His younger brother Jack also came with her for the visit.

Winston's parents turned deaf ears to his pleas for them to come to visit him. Many times they would not even answer his letters.

He entered school at Harrow. He still did not do well, but his teachers saw his potential. By age fourteen he was doing very well in history and literature.

One day after looking at the way Winston had his toy soldiers lined up, his father asked him if he would like to go into the Army, and Winston said, "Yes". He felt so good because he thought his father saw him as a military genius. He later learned Lord Randolph thought his son was not intelligent enough to become a lawyer, and the Army was just an alternative.

When Winston was fifteen his mother promised him a gun and a pony if he would quit smoking. He quit for a short time. We know when he was an adult he developed a taste for Cuban cigars after a visit to Cuba. The cigar, along with the "V for Victory" hand sign, became his trademark.

The year he turned twenty-one was a difficult year for Winston. His father, Lord Randolph died, and that summer his beloved governess, Mrs. Everest, also passed away. He had spent his whole life trying unsuccessfully to please his father. His faithful governess had always given her unconditional love and support. How ironic!

He joined the Army and during his enlistment he spent time in Cuba, India, and in Egypt. He read a lot, educated himself, and then began writing. He would go to war and when he went home he would write a book about it.

When he was twenty-four he decided to leave the Army and pursue a writing career. He traveled to South Africa as a war correspondent. The Boers derailed the train on which he was riding. After helping those who had been wounded, Churchill was taken captive. He managed to escape by climbing out a latrine window. He made it to Pretoria, South Africa, stowed away on a train, and then was aided in his escape by John Howard, who was the coal mine manager. When he finally arrived home, he learned he had become world-famous overnight. This helped him to launch his political career.

In 1900 the voters elected him to Parliament, an office he would occupy the greater part of his life.

Between World War I and World War II (Two) Churchill began painting and became well-known as an artist.

When he was thirty-four years old he married Clementine Hozier. He later said his most brilliant achievement was persuading his wife to marry him. He said he "lived happily ever afterwards". They had four children; three daughters, Diana, Sarah, and Mary, and one son, Randolph.

Churchill was one of the few men who recognized the threat Germany posed to the world. He was in a position as lord of the admiralty to build up the British navy. People called him a warmonger, but the fleet was ready when it was needed.

When the Germans invaded Poland on September 1, 1939, it became clear that Churchill's warnings about the threat had been right on target.

On May 10, 1940, when he was sixty-six years old he became prime minister of Great Britain. He said, "I felt as if I were walking with destiny, and that all my past life had been but a preparation for this hour and for this trial".

He declared, "Let us therefore brace ourselves to our duties, and so bear ourselves that if the British Empire and its Commonwealth last for a thousand years, men will say, 'This was their finest hour'".

In 1953 Queen Elizabeth knighted him and he became "Sir Winston Churchill", a member of the highest order of British knighthood.

That same year he also won the Nobel peace prize for literature.

During World War II he had many meetings with Franklin Delano Roosevelt as they mapped out a strategy to win the war against the Axis Powers. Joseph Stalin joined them at Yalta, and they became known as "The Big Three". See FDR Resources. 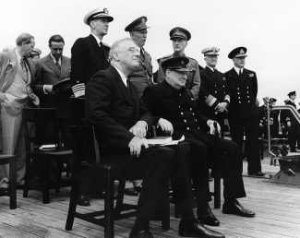 He died two years later at the age of ninety after suffering a stroke.

governess
Pronunciation: 'gə#601;v-ə#601;r-nə#601;s
Function: noun
a woman who teaches and trains a child in a private home

prime minister
Function: noun
the chief officer of the government in some countries

commonwealth
Function: noun
a political unit (as a nation or state)

knight
Pronunciation: 'nIt
Function: noun
a man honored by a sovereign for merit
and in Great Britain ranking below a baronet

stroke
Function: noun
sudden weakening or loss of consciousness
or the power to feel or move caused by the breaking
or blocking (as by a clot) of a blood vessel in the brain
called also apoplexy

Winston Churchill
from the Churchill Centre.

British History for Kids
at BBC

At biography.com search for Winston Churchill.
Scroll the panel for the "Video & Audio Results".

Clementine Churchill: the biography of a marriage
by Mary Soames (selected pages)