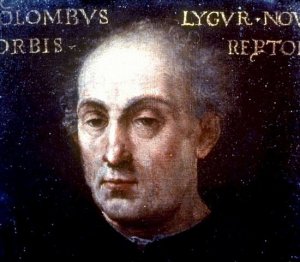 Christopher Columbus was born in Genoa (JEN oh uh), Italy. He was the oldest of five children in his family. His father was a wool weaver. He helped his father with the weaving, but he always wanted to sail the seas.

He didn't get to go to school very much, but he learned to read and write Spanish during his travels. He also taught himself Latin because all the geography books were written in Latin.

Some people thought he was trying to prove the world was round, but this is not true. Most people already knew the earth was round. He wanted to find a short way to get to the Indies by ship.

He was a Christian and wanted to tell the story of Christ to the people he would find in the far-away lands. He also wanted wealth for himself and for Spain, and he wanted to be famous.

He tried for eight years to get King Ferdinand and Queen Isabella to supply him with ships and money. Finally they agreed, but he made more demands.

He wanted to be made a knight,* admiral* of the Ocean Sea. He wanted to be the viceroy* and governor* general* of all lands he would discover. Also he wanted one-tenth of everything he found of value in the new lands.

He even boldly told them he wanted all of this in writing. This was rather brave of him because they could have had him killed because of his demands.

They finally agreed and he got three ships ready to sail;
the Santa Maria and two smaller ships, the Pinta and the Nina. He took enough food for a year. In four months he was ready to sail.

They left Spain on August 3, 1492. They made one stop, then sailed on toward the west. After many days, the sailors were ready to turn around and start back home.

"Just three more days," he said. "Then if we don't see land, we'll turn around and go back home." 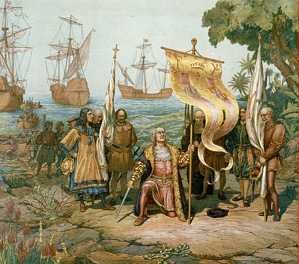 Two days later they saw land; an island Columbus named San Salvador. He thought he had found the Indies and called the people he saw there "Indians".

When they got to Cuba, he thought he was in China. The world was a lot larger than he thought.

On Christmas Eve, the Santa Maria was wrecked near Haiti. Columbus built a fort and left 40 men to hunt for gold. Then he returned to Spain on the Nina. The Pinta also returned. The people of Spain welcomed him as a hero.

He made three more voyages across the ocean. His 13-year-old son, Ferdinand went with him on the fourth voyage.

Columbus did not become rich as he had hoped. At the end of his life he only had a pension the king and queen had given him because he was the first to reach the New World. He spent the last few months of his life in bed because of the pain of arthritis.

Columbus not only discovered a New World, but he led the way for other explorers. 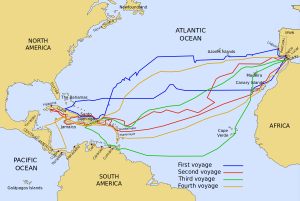 The Voyages of Columbus


This biography by Patsy Stevens, a retired teacher, was written in 2001.
Take the online test

knight
Pronunciation: 'nIt
Function: noun
1 a : a warrior of olden times who fought on horseback,
served a king, held a special military rank, and swore to behave in a noble way
b : a man honored by a sovereign for merit and in Great Britain ranking below a baronet...

viceroy
Pronunciation: 'vIs-"roi
Function: noun
1 : the governor of a country or province who represents the sovereign...

governor
Pronunciation: 'gəv(-ə)-nər also 'gəv-ər-nər
Function: noun
: one that governs; especially : an official elected or appointed to act as ruler,
chief executive, or head of a political unit (as a colony, state, or province)...

The Round Earth and Christopher Columbus

A Story About Columbus
The Lincoln Readers Book 4

At biography.com search for Christopher Columbus.
Scroll the panel for the "Video & Audio Results".
(There is short ad before the video presentation.)

If You Were There in 1492: Everyday Life in the Time of Columbus
by Barbara Brenner (selected pages) Order here

Christopher Columbus and The New World of His Discovery
online book by Filson Young
HTML version (950KB) has color illustrations.