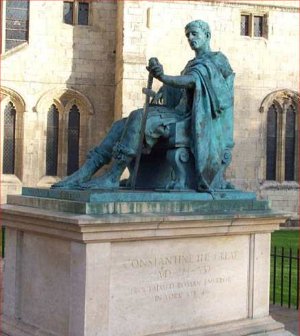 Constantine (KAHN stən teen) united the Roman Empire* under one ruler. Before this time, it had been divided. When he became emperor,* he made many changes. He wanted people to believe the government would be kind to them. He made a new coin called "solidus" which means solid. This coin was used in the empire for 700 years.

He wanted people to feel safe, and he wanted them to be treated right.

He studied the mistakes of others, and tried not to make the same mistakes.

The ruler made many changes. He said slaves should be treated well, and their families should not be separated. He made Sunday a day of rest.

He was impressed by the Christians' strong faith. He saw they were well organized and loyal. He knew he needed their help. To gain their support, he gave them religious freedom; the freedom to worship as they pleased. He banned* crucifixion.*

He himself became a Christian right before he died.

Constantine believed he had been chosen by God to rule. The capital was named after him. He called it Constantinople
(KAHN stan tə NO pl).

He enjoyed the support of the people. Even though he talked about peace, within his own family there was strife. It is said he even had some members of his family killed.

(Photo taken by my son, Elton while in York, England.)

empire
Pronunciation: 'em-"pI(ə)r
Function: noun
1 a : a major political unit with a large territory or a number of territories or peoples under one ruler with total authority; especially : one having an emperor as chief of state b : the territory of such a unit ...

emperor
Pronunciation: 'em-pər-ər, -prər
Function: noun
: the ruler of an empire
Word History : The word emperor is a general word for a ruler having total control of a country or region.
Use of the word emperor itself can be traced back to Imperator Caesar Augustus. The Latin word imperator was originally a title given to great Roman generals. The word meant "commander", and it was derived from the verb imperare "to command". It is because Augustus, the first Roman emperor, used imperator as a title that we use emperor as we do today....

crucifixion, crucify
Pronunciation: 'kroo-sə-"fI
Function: verb
: to put to death by nailing or binding the hands and feet to a cross...

Constantine
at An Online Encyclopedia of Roman Emperors

The Emperor Constantine
The Early Church

Books
Press "Go" to search for books about Constantine.
Library

Search for "Emporer Constantine" at Amazon.