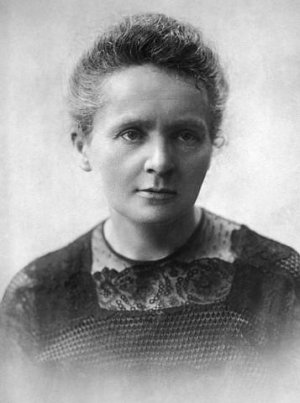 Marie Curie was born Marya Salomee Sklodowska (sklaw DAWF skah) in Poland when that part of the country was under Russian rule. She was the youngest of five children. She had a brother and three older sisters.

When she was four years old one of her older sisters taught her the alphabet, and Manya (as they called her) learned how to read. In fact, she could read better than Bronya who had taught her.

Her father was a professor. Sometimes the family would rent out rooms to students to help pay the bills. At one time they had ten boys living in the apartment with the family, and Manya had to sleep on a couch in the dining room.

Her mother was very ill with tuberculosis* and died of the disease when Manya was ten years old.

When she graduated from high school she won a gold medal because she had been such a good student. Her father knew she had worked very hard, and as a reward, she was permitted to spend a whole year in the country with relatives. She enjoyed a marvelous year with her cousins.

She wanted to study when she returned to Warsaw, but there was no money to send her away to college. She and her sister did private tutoring to earn money. Manya told her sister she would work to send her to school, then when Bronya became a doctor, she could return the favor. That's what they did.

Marie became a governess to a family in the country and also had an opportunity to teach several peasant children to read and write.

She fell in love with her employer's son, but his parents thought she wasn't rich enough or good enough to marry their son.

Her sister invited her to come to Paris to live and begin her studies. Manya changed her name to a French name, Marie. At the Sorbonne, the university, she chose to study mathematics and physics. While studying there she lived in a cold apartment and survived on very little food, but when she graduated she had the highest grades in the class. She had a master's degree in physics. Then she was awarded a scholarhip and was able to study further to get a master's degree in mathemetics. She would also later receive a doctorate in physics.

She met Pierre Curie and they married in 1895. With the money a cousin gave her for a wedding present, Marie bought two bicycles, one for herself and one for Pierre. They pedaled through the French countryside on their honeymoon.

Pierre and Marie began experimenting together and discovered two new radioactive elements. She named one of them polonium* to honor her native country Poland, and the other they named radium.* They worked four years preparing a very small quantity of radium in order to prove there really was such an element. They had to work with a ton of pitchblende* uranium ore to accomplish this. The Austrian government had provided the ore, and they only had to pay for transporting it. Marie worked hard carrying very large jars of liquid during those years of experimenting. 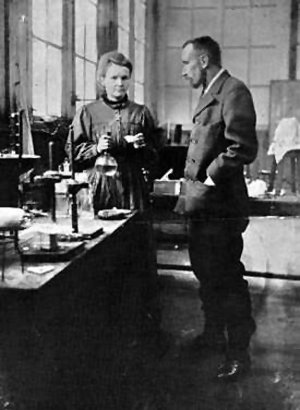 Marie and Pierre in the laboratory

In 1903 Pierre and Marie along with Henri Becquerel (ahn REE beck REL) received the Nobel Prize* in physics for their work and their discovery of radioactivity.* The money they received made life a little easier, and they also used some of it to help friends and family members. In 1911 she was again awarded the Nobel Prize for discovery of the two new elements polonium and radium. 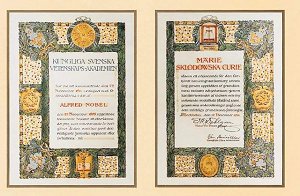 The Curies had two daughters, Irene and Eve. They were good, loving parents. Pierre was offered a professor's job at the Sorbonne. Life seemed to be getting easier for them.

Then the unthinkable happened; Pierre was killed when he stepped out in front of a wagon being pulled by horses. Marie was in shock. What would she do without him? She felt like only half a person with Pierre gone, but she was strong and able to continue their work. They let her start teaching his classes at the Sorbonne. She was the first woman to teach at the university. Pierre's father, Dr. Curie lived with the family and helped to raise the girls. Four years later, he too died.

During the First World War Marie determined she could best serve by outfitting some cars with x-ray machines which could be taken to the battlefield hospitals. Bullets and shrapnel* could be located with x-rays to help the doctors treat the wounded soldiers. Irene, who was seventeen years old, helped her mother by becoming a nurse and working with her on the battlefield. Marie trained 150 women to become x-ray technicians.

Madame Curie made two trips to America to receive a gram of radium each time, first from President Warren Harding and eight years later from President Herbert Hoover.

In 1923 the French government gave her a pension of 40,000 francs a year in recognition of her lifetime of work in France.

She became ill and died from all her years of exposure to radium. Today doctors identify the disease as leukemia.

After Marie's death her daughter Irene and her husband Frederic Joliot received the Nobel prize for their work in atomic research. She followed in her mother's footsteps to also become a great scientist.

Many people have benefited from the discoveries made by Pierre and Marie Curie. The radiation which burned their skin as they worked with it, eventually came to be used to kill cancer cells in patients suffering from the disease.

tuberculosis
Pronunciation: t(y)u-"bər-kyə-'lO-səs
Function: noun
a disease of human beings and some other vertebrates caused by a bacterium
and usually marked by wasting, fever, and formation of
cheesy tubercles that in human beings occur mostly in the lungs

polonium
Pronunciation: pə-'lO-nE-əm
Function: noun
a radioactive metallic element that is found in pitchblende and decays to form lead

radium
Pronunciation: 'rAd-E-əm
Function: noun
a strongly radioactive shining white metallic element that is
chemically similar to barium, occurs in combination
in very small quantities in minerals (as pitchblende),
and is used in the treatment of cancer

pitchblende
Pronunciation: 'pich-"blend
Function: noun
a brown to black mineral that is a source of uranium and radium

radioactivity
Pronunciation: -"ak-'tiv-ət-E
Function: noun
the giving off of rays of energy or particles
by the breaking apart of atoms of certain elements (as uranium)

Nobel Prize
Pronunciation: (")nO-"bel-
Function: noun
an annual prize (as in literature, medicine, peace) established by
the will of Alfred Nobel for the encouragement of people
who work for the interests of humanity

shrapnel
Pronunciation: 'shrap-nəl
Function: noun
1 : a shell designed to burst and scatter metal balls with which it is filled along with jagged fragments of the case
2 : metal pieces from an exploded bomb, shell, or mine

Marie and Pierre Curie
from Nobelprize.org

Women in the Academy (audio)
Naming the Chemical Elements (audio)
Engines of Our Ingenuity.

At biography.com search for Marie Curie.
Scroll the panel for the "Video & Audio Results".