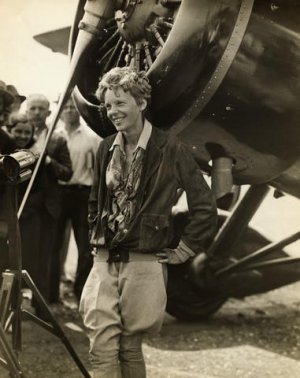 Amelia Mary Earhart's family consisted of her father Edward, mother Amy, Amelia and her younger sister Muriel. Amelia was named after her two grandmothers, but she was called "Meelie" because when Muriel was young she couldn't say "Amelia". The nickname remained with her throughout her life.

The family enjoyed relating a story about their great-grandmother. When she was 2 1/2 years old her father lifted her up on his shoulders for her to see George Washington pass by.

Amelia's mother came from a well-to-do family and when her parents married, Judge Otis, Amy's father gave them a fully furnished two-story home for a wedding present.

Amelia was daring even when she was child. When she was seven years old she wanted to ride an elephant, but her mother said, "No", but allowed her to ride a Ferris wheel instead.

A short time later Amelia, Muriel, and a neighbor boy, Ralphie built a roller coaster which ran from the top of an eight foot toolshed to the ground. Their Uncle Carl, whom they called "Nicey", helped them with it. Amelia took the first ride and felt as if she were "flying", but when their mother came out and saw what they had done, she made them tear it down. To make up for the loss of their roller coaster, their parents gave them a lawn swing, and Uncle Carl made a merry-go-round for the girls. Their mother made gym suits for them to wear and encouraged their tomboyish activities.

Amelia and her sister loved animals, and it hurt them when they saw animals being abused. Once she refused to take a piece of cake to their neighbor, Mr. Oldham, because he had been cruel to his horse. Mother understood and didn't scold her.

When Amelia was eight, her father was offered a job in Des Moines, Iowa. The family rode the train during a terrible rain storm to make the move. Flooding caused the train to move very slowly. Amelia learned from this experience to not panic in tense situations. The girls stayed nearly a year in Atchison with their grandparents while their parents looked for just the right house to rent. They spent many happy hours playing with their cousins. They especially enjoyed imaginary "trips" in an old carriage* stored in the barn.

That Christmas their dad gave them a .22-caliber* rifle which they used to shoot the rats that infested the barn. Grandmother Otis thought a rifle was not a suitable gift for two girls aged seven and nine.

In the summer of 1908 they moved to Des Moines to live with their parents. Things went well for a while, then her father began to drink. They experienced lean years because he was unable to keep a job. Her mother had inherited a trust which helped with expenses.

Amelia went to college in Toronto, Ontario, Canada, but soon dropped out to become a volunteer nurse and help the soldiers who were being wounded in World War I. Because of her knowledge of chemistry, she helped with the diets and found ways to make the food better for the soldiers.

After the war ended, she enrolled as a pre-medical student at Columbia University.

In 1921 Amelia began taking flying lessons from Neta Snook. She worked in a telephone office to pay for the lessons. She bought her first airplane that summer. She told Muriel, her sister, that she could foresee a day when the cockpits of planes would be covered, and planes would be large enough to carry 10 or 12 passengers. They would even run on schedule as trains did.

She set a new altitude record for women by flying her plane as high as 14,000 feet.

It was during this time her parents divorced. Amelia sold her plane, bought a car which she called the Yellow Peril, and drove her mother to Boston. In Boston she took a job teaching English to foreign students at a place called Denison house. She also worked as a visiting nurse. She moved into Denison house to work with the children there. Her fiance, Sam Chapman, objected. She finally broke the engagement because Sam was opposed to a woman working after marriage. Amelia was too independent for him.

She met George Palmer Putnam (known as G.P.), her future husband, when she was preparing for a flight from America to England. She would be riding as a passenger on this trip; the first woman to cross the Atlantic by plane. The plane was called the Friendship. The leg of the trip from Newfoundland to Wales took 20 hours and 40 minutes. Later when she wrote a book about the trip, she titled it "20 Hours, 40 Minutes, Our Flight in the Friendship".

In addition to her accomplishments, the nation was impressed by her sincerity, her simplicity of dress, and her abstinence from liquor. Once she allowed her name to be used in a cigarette ad even though she didn't smoke. The fact that her name was associated with cigarettes damaged her reputation somewhat.

She and other women pilots formed an association called the Ninety-Nines because that was the final number of women pilots who joined the organization.

For a period of time she wrote articles about aviation* for Cosmopolitan magazine.

G.P. proposed to Amelia six times before she said, "Yes". They were married quietly, and she wired her sister "Over the broomstick with G.P. today. Break the news gently to Mother." "Jumping over the broomstick" referred to a marriage custom celebrated by slaves in a former time. Her mother disapproved of the marriage because G.P. was twelve years her senior and a divorced man.

She designed clothing suitable for travel or lounging and even designed some light weight luggage for air travel.

In 1932, one year after her flight as a passenger across the Atlantic, she made a transatlantic flight alone from Harbour Grace, Newfoundland to Ireland. It was a hazardous flight due to the fact that her altimeter* wasn't working. She didn't know her altitude* ; how high she was above the ocean, but she arrived safely and was awarded many honors in Europe.

In 1934 she made a successful flight across the Pacific from Honolulu, Hawaii to Oakland, California. As a safety measure on this flight she carried two altimeters as well as three compasses.

Dr. Elliot, President of Purdue University, asked her to join the faculty to guide their 800 women students in their careers. Twenty of the women expressed an interest in flying. Two members of the Purdue board of directors donated $40,000 for Amelia to purchase a Lockheed Electra, which she later used as she attemped an around-the-world flight.

One evening Amelia, while dressed in a white evening gown and high-heeled shoes, took the First Lady, Eleanor Roosevelt, and some women reporters for a ride in her plane. Mrs. Roosevelt wanted to learn how to fly a plane, but the President said, "No".

For her flight which would circle the globe, she chose Capt. Harry Manning as her navigator and Fred Noonan, a veteran pilot would accompany her part of the way. Her plans were to fly from Honolulu to Lae, New Guinea with a stop at Howland Island for refueling.

The flight began on March 17, 1937 with four people on board; Amelia, Harry Manning, Fred Noonan, and Paul Mantz. Fred was located in the back of the plane and he and Amelia communicated by tying notes to a bamboo pole and passing them back and forth.

They stopped in Hawaii, and then when attempting take off from Hawaii, a tire blew out causing such damage to the plane, it had to be returned to Lockheed for repair. The accident ended that attempt.

On June 1 Amelia and Fred Noonan made a second attempt, this time reversing the route flying from west to east. They flew from Miami to Puerto Rico, Venezuela, Brazil, Africa, India, Burma, Bangkok, Singapore, Australia, and then to Lae, New Guinea.

She had the plane refueled at Lae, and she and Noonan departed on July 2 for Howland Island; a tiny island in the Pacific with an area of slightly more than one-half a square mile. The Interior Department had constructed three runways for her landing. If she missed the island, she would not have enough fuel to get to Hawaii, which was 1600 miles to the east.

In some of the last transmissions* they received from her, she said she was running low on fuel. Finally transmissions ceased altogether. A Naval message indicated she probably passed northwest of the island and missed it due to the glare of the rising sun. The winds were also stronger than expected and may have altered their course. A search was started, but no sign of the plane was ever found. After sixteen days the Navy called off the search.

Fred Noonan left a bride of one month. Amelia left a husband, sister, mother, a niece, a nephew, and many friends. 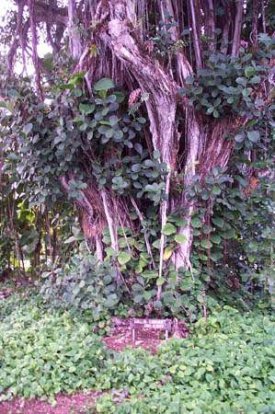 There is a Banyan tree growing in Hilo, Hawaii planted by Amelia Earhart January 6, 1935.

The facts in this story were gleaned
from a book written by Amelia Earhart's sister,
Muriel Earhart Morrissey and Carol L. Osborne.

altitude
Pronunciation: 'al-tə-'t(y)ood
Function: noun
the vertical distance of an object above a given level (as sea level)

aviation
Pronunciation: 'A-vE-'A-shən, av-E-
Function: noun
the operation of aircraft (as airplanes or helicopters)
that are heavier than air

transmission
Pronunciation: tran(t)s-'mish-ən, tranz-
Function: noun
1 : an act, process, or example of transmitting
2 : the passage of radio waves in the space between transmitting and receiving stations
3 : something transmitted

Two Visions of Aviation (audio)
Engines of Our Ingenuity.

At biography.com search for Amelia Earhart.
Scroll the panel for the "Video & Audio Results".

Amelia Earhart, People We Should Know
by Jonatha A. Brown (selected pages)