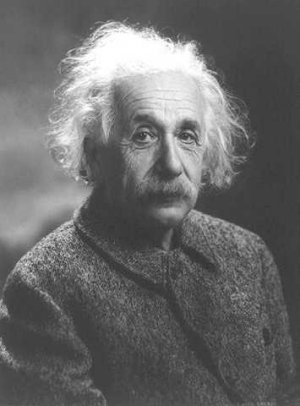 Albert Einstein (AL bert EYEn stine) was born in Ulm, Germany. His father was an electrical engineer, and his mother was a musician. She taught him to appreciate music, and he learned to play the violin.

When he was very young he was slow in development. He didn't speak until he was two years old, and even when he was older he had trouble answering a question. He would first silently mouth the words to himself and then slowly answer out loud. His teachers thought he would never be successful at anything. 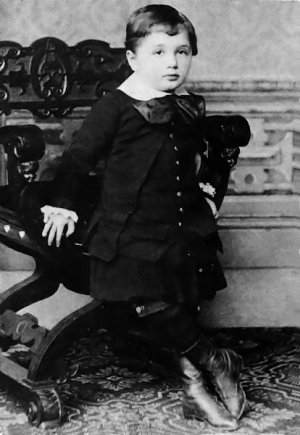 When he was six, his father gave him a compass. He was fascinated by the way the needle always pointed north. This experience helped to create a great curiosity in him and had an impact on the rest of his life.

His Uncle Jakob was a strong influence in his life. He gave Albert math books about algebra* and geometry.* Uncle Jakob described algebra as "a merry science". He said algebra could be compared to hunting a little animal. You didn't know the name of the animal, so you called it "x". Then when you finally caught the animal you gave it the correct name. He made learning fun for the boy and also provided a model for teaching that Albert would later use. In the future he would explain his theories by using examples of trains, elevators, and ships.

Once a week his parents invited a poor medical student, Max Talmey to eat with them. Max brought science books to share with Albert, and they became good friends.

His family moved to Munich, Germany where in elementary school he was the only Jew in a Catholic school. He attended a high school called Luitpold Gymnasium. He was bored at the school. His family next moved to Italy, but they wanted Albert to finish the school year in Munich. He wanted to leave Munich so badly he got a false paper from a doctor stating he had a lung condition and must move to a dry climate (such as Italy where his parents were living). Then he convinced the school to give him a certificate in math so he could get into college. They complied because they wanted to get rid of him.

After a year in Italy he went to Zurich, Switzerland to study at the Polytechnic Institute. He failed the entrance examination and had to spend a year at another college before returning to Zurich.

Up to this point his life had been rather unremarkable. After college he took a job at the Swiss Patent Office examining patents* for people's inventions. This job was ideal for him because he had a lot of free time for research about things that really interested him; things such as light and time.

The year 1905 was an exceptional year for Einstein. In that year he published three outstanding papers. 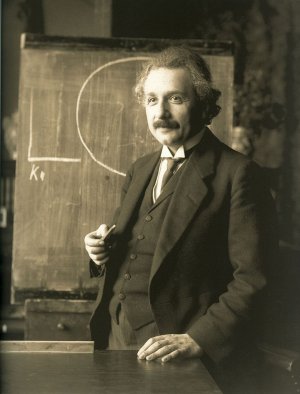 #1. He outlined his photoelectric* law in which he discussed the behavior of light. This led to the development of television and motion pictures with sound. In 1921 he was awarded the Nobel Prize for this paper.

#2. The second paper, which was his most famous, explored the relation of mass to energy (E=mc squared) and addressed the problem of atomic energy. This paper provided the basis for the development of the atomic bomb. In 1939 he wrote to President Franklin D. Roosevelt and told him Germany was also working on nuclear fission* which would lead to the development of a German bomb.

#3. The third paper was On the Electrodynamics of Moving Bodies which is also known as the Special Theory of Relativity. 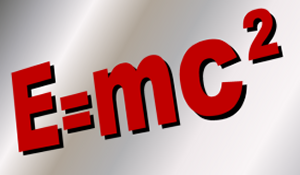 Einstein spent hours experimenting with electromagnets.* From his experiments he concluded the speed of light is always the same; 186,000 miles a second. This, he said, was as fast as anything could travel.

In 1933 when Einstein was visiting in the United States, the Germans stole his property and took away his German citizenship. The Institute for Advanced Study in Princeton, New Jersey invited him to be their director. He spent the rest of his life in America. After a few years he became a U.S. citizen.

Einstein was married two times; first to Mileva Maric with whom he had studied at the Polytechnic Academy. She was very smart and was a lot of help to Albert. They were married for sixteen years and had three children together, a daughter Lieserl and two sons, Eduard and Hans Albert. His second wife was Elsa, who was his first cousin. She had two daughters from a previous marriage. She and Albert had grown up together when they were children.

At the end of his life Einstein was a lonely man. His wife Elsa died after they had been married for seventeen years. His health began to fail and he died at the age of 76.

He spent his life working to find a balance between science and spirituality. He once said at a Symposium,* "Science without religion is lame, religion without science is blind."

algebra
Pronunciation: 'al-jə-brə
Function: noun
a branch of mathematics that uses letters to represent numbers
and that studies numbers and the operations
(as multiplication and addition) that are used on them

patent
Pronunciation: 'pat-ənt
Function: noun
1 : an official document granting a right or privilege;
especially : a writing granting to an inventor for a term of years
the only right to make, use, or sell his or her invention
2 : the right granted by a patent

photoelectric
Pronunciation: 'fOt-O-ih-'lek-trik
Function: adjective
involving, relating to, or using any of various electrical effects
due to the action of radiation (as light) on matter

fission
Pronunciation: 'fish-ən also 'fizh-
Function: noun
1 : a splitting or breaking up into parts
2 : the splitting of an atomic nucleus
resulting in the release of large amounts of energy

electromagnet
Pronunciation: i-'lek-trO-'mag-nət
Function: noun
a core of magnetic material (as soft iron) surrounded by a coil of wire
through which an electric current is passed to magnetize the core

symposium
Pronunciation: sim-'pO-zE-əm also -zh(E-)əm
Function: noun
1 : a group meeting at which there are several speeches
and often a group discussion
2 : a collection of opinions on a subject

Albert Einstein Archives
includes a timeline of his life

Video "A is for Atom"
14 minutes long

Einstein's Wife
The Life of Mileva Maric Einstein at PBS

"The Drama of Albert Einstein"
online book by Antonia Vallentin

At biography.com search for Albert Einstein.
Scroll the panel for the "Video & Audio Results".


Credits and Solutions
You may use the picture at the top of this page without permission. It came from the Library of Congress and is in the public domain.