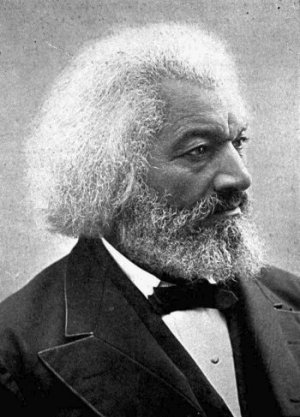 In his autobiography The Narrative of the Life of Frederick Douglass, An American Slave, he states that his father was a white man, possibly the master of the plantation. He was separated from his mother when he was an infant. He only saw her four or five times in his life, and she died when he was about seven years old. 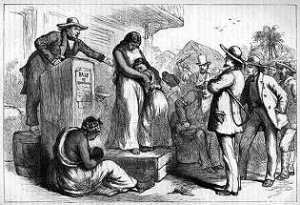 He tells of witnessing the beating of slaves by unmerciful masters.

Slaves received a monthly allowance of food and a yearly allowance of clothing. Children too young to work only received two coarse linen shirts a year. If the shirts wore out, they had to go without clothes until time for the next allowance. Some of them were without clothing during the coldest months.

Their beds, if you could call them beds, consisted of only one coarse blanket. Once when he was young he stole a bag used for carrying corn and crawled into it each night to try to keep warm.

Frederick lived on the plantation of Colonel Lloyd. The Colonel had a large fine garden. In order to keep the slaves from stealing the fruit, he built a fence around it and put black sticky tar on it. If a slave was found with tar on him, he was whipped by the chief gardener.

Some of the overseers were extremely cruel to the slaves in their charge. They could murder a slave and there would be no consequences. It was not considered a crime either by the courts or the community.

Cornmeal was boiled to make a mush then put into troughs* and set down on the ground. The feeding of the slave children was similar to the feeding of pigs. Those who ate the fastest got the most.

When he was seven or eight years old Frederick went to Baltimore to the home of Mr. and Mrs. Auld to care for their young son. There for the first time he found kindness. It was Mrs. Auld who taught him his ABCs and how to read. She changed over time however, and at the insistence of her husband she quit teaching him. It was against the law for anyone to teach a slave to read.

He was so eager to learn he befriended the white boys who knew how to read. He would take bread from his master's house and use it to bribe the poor white boys to teach him how to read.

For the first time in his life he had enough to eat at the the Auld's house.

When he began reading the book The Columbian Orator* he began to be able to formulate his ideas about slavery. The more he read, the more he began to detest the enslavers. As he describes it he felt like "a man in a pit with no ladder to get out".

He began to hear about the "abolitionists"* and determined to learn more about them.

He knew that some day he would run away and be free, but first he had to learn how to write. He began by copying letters from Webster's Spelling Book.

He was hired out to a Mr. Covey to "break him" of his obstinance. The man was very cruel, but one day when Frederick fought back, things changed. Covey never whipped him again. This was the turning point. He knew that one day he must be a free man.

He was sixteen years old at the time. He remained a slave for four more years. He had several fights but was never whipped again.

He began a Sabbath school to teach the other slaves how to read and write. At one time he had over 40 students, mostly men and women.

Frederick and four other slaves made plans to run away, but they were betrayed and ended up in prison for a time.

Next he was apprenticed to a ship builder and learned the trade. Sometimes he made as much as $1.50 a day, but was compelled to turn the money over to his master when he got home. Once when he turned over $6 to the master, six cents was returned to him. He said it would have hurt him less if nothing had been returned because he knew rightfully he should have been able to keep the whole amount.

He finally escaped and made his way to New York where a kindly man, Mr. David Ruggles, took him in. He sent for Anna, his intended wife, and they were married. He was able to find a job and worked joyfully in his new found freedom.

After his book was published, he left the country for a time fearing his old master would try to get him back. He went to Ireland and spent two years in Great Britain. Friends in England raised money to purchase his freedom from Mr. Auld.

After returning to America he began to publish an abolitionist newspaper The North Star. Within eight years he had 3,000 subscribers. He became a great orator, speaking out against slavery. His words and his writing were so effective that some people doubted they had been written by a former slave.

When the Civil War started, Abraham Lincoln's aim was to preserve the union. Douglass urged the President to make emancipation* of the slaves the goal of the conflict. On January 1, 1863 his dream was realized with the Emancipation Proclamation.

Douglass had been instrumental in the formation of two black regiments during the war. Previously blacks were prevented from participating in the conflict.

He and his wife Anna had five children, and they built a fine home in Washintgon D.C. After her death he married Helen Pitts, the daughter of a white abolitionist leader. She was twenty years younger than he, and the marriage faced a storm of criticism because of the race difference. 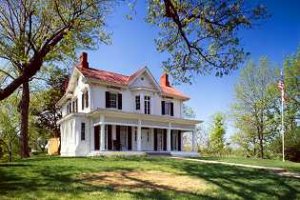 Frederick Douglass served in several government posts and and in 1889 was appointed consul* general to the Republic of Haiti.

He died of heart failure after a speaking engagement to the National Council of Women in Washington, D.C.

Many of the facts in this story were taken from Frederick Douglass' Autobiography.

abolitionist
Pronunciation: ab-ə-'lish-(ə-)nəst
Function: noun
a person who is in favor of abolishing especially slavery

abolish
Pronunciation: ə-'bahl-ish
Function: verb
to do away with completely : put an end to

emancipate
Pronunciation: i-'man(t)-sə-"pAt
Function: verb
to free from someone else's control or power; especially : to free from slavery

consul
Pronunciation: 'kahn(t)-səl
Function: noun
an official appointed by a government to live in a foreign country to look after the
commercial interests of citizens of the appointing country

Frederick Douglass Speech, "An Appeal to the British People"

Frederick Douglass Lesson Plan
Lesson Snips.com
(You must register to use, a limited number of lessons free)

The Frederick Douglass Papers
at Library of Congress

At biography.com search for Frederick Douglass.
Scroll the panel for the "Video & Audio Results".

A Picture Book of Frederick Douglass
by David A. Adler (selected pages)