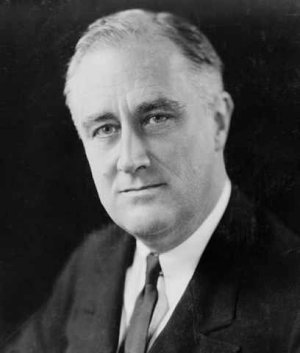 Franklin Delano Roosevelt (FRANK ln DEL uh no RO zuh velt) known as "FDR" was a descendant of Theodore Roosevelt, his fifth cousin, who had been the 26th President of the United States.

He was the only child of James and Sara Roosevelt. His father was 26 years older than his wife Sara, who was 28 years old when Franklin was born. She was very strict with their son, but both parents loved him very much. They took him on trips to Europe with them, and instead of attending school, Franklin was taught by private tutors.

When he was 14 he went to a preparatory school, and upon finishing high school he attended Harvard where he graduated. Next he went to law school at Columbia University.

While he was at Harvard he made contact with his distant cousin, Eleanor whom he had known as a child. She was rather plain-looking, but she had a brilliant mind, and this attracted Franklin to her. His mother opposed the marriage and constantly interfered. In fact while the couple was on their honeymoon Sara rented a house and fully furnished it to suit her own tastes. Through the years her interference caused Eleanor a lot of grief.

They had six children, but one of their sons died as an infant. Roosevelt was a good father and engaged in many sports and activities with his children.

His political career began at the age of 29 when he became a U.S. Senator from New York. He ran for Vice-President in 1920 on a ticket with James Cox, but they lost the election to Herbert Hoover.

The next year a terrible thing happened to him. He became ill with polio,* a disease which attacks and cripples the body. He became partially paralyzed. He fought hard to overcome the disease and regained the use of his hands, but he would never be able to walk again without help. Swimming in warm water seemed to help his legs.

Some thought his career was ended, but with his determination he proved them wrong. He was elected governor of New York, then in 1932 he was elected President of the United States.

The country was in an economic depression.* People could not get jobs, and families were suffering. Men stood in bread lines to get food. People lost their homes, and farmers lost their farms.

Three weeks after he took office there was a banking crisis. People began to be afraid and drew their money out of the banks. The banks were running out of money. Roosevelt declared a "bank holiday" and closed all the banks until the accounting books could be examined. The financially sound banks were given money by the government to reopen, but the banks in financial trouble remained closed. 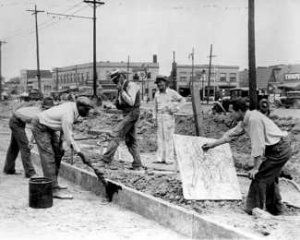 Roosevelt knew he had to do something to help his countrymen survive the economic crisis. He implemented "The New Deal". He created jobs for people building roads, bridges, and schoolhouses. They even paid people to clean up the parks and do odd jobs. The economy gradually began to recover.

Radio was the primary source of information in those days. Roosevelt used the radio as a means of communicating through his "fireside chats". Through a series of thirty such "chats" he enlisted the co-operation of the American people. He would begin each talk with "My friends...". 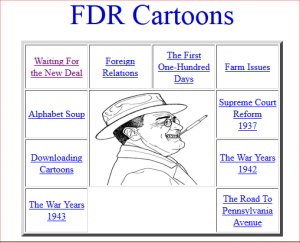 In 1936 Roosevelt was re-elected. It was a landslide* ! He received 523 electoral votes and Alf (Alfred) Landon only received 8. Roosevelt won in every state except Maine and Vermont.

In 1935 Congress passed the Neutrality* Act which "prohibited the United States from furnishing weapons or supplies to any nation at war". They passed more laws to keep America free of "foreign entanglements".

Then Germany attacked Poland. What was America to do? Should she just ignore what was happening? Congress passed another Neutrality Act which allowed the sale of weapons, but nations buying the weapons had to move them on their own ships.

In 1940 the Democrats again nominated Roosevelt to run for President. No man up to this time had ever run for a third presidential term, but there was no law against it. (In 1947 the 22nd Amendment to the Constitution was proposed limiting a person to serving only two terms as President. It was ratified in 1951.) Roosevelt was elected to a third term.

The world at this time was divided into two camps. On one side were the Axis Powers: Nazi Germany, Fascist Italy, and the Empire of Japan. Adolph Hitler (AH dolf HIT lur) was the Fuehrer (FYUR r) or the German leader, Benito Mussolini (buh NEE toe moo suh LEE nih) was Prime Minister of Italy, and Hirohito (heer oh HEE toe) was the Emperor of Japan. Tojo (TOE jo) was the Japanese general and Prime Minister. ( See FDR Resources ) 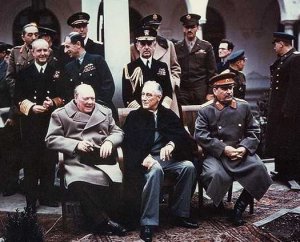 In the other camp were the Allies; those opposing the Axis Powers. This alliance was composed of Winston Churchill, British Prime Minister, Franklin D. Roosevelt, President of the United States, and Joseph Stalin of Russia. (See FDR Resources)

America had been able to stay out of the war until December 7, 1941. That was the day Tojo, the Japanese Prime Minister, ordered an attack on the American Naval fleet at Pearl Harbor on the island of Hawaii. Franklin Roosevelt described it as "a date that will live in infamy". America had finally been drawn into World War II (Two).

Roosevelt had meetings in Washington with British Prime Minister Winston Churchill. They decided that Germany, the most powerful of the Axis must be defeated first. They continued to meet, then they included Joseph Stalin of Russia in the talks. They were known as "The Big Three". Roosevelt also had talks with Generalissimo Chiang Kai-shek (JEE-AHNG ki shek) of China.

Since the war was continuing in 1944, Roosevelt was again elected President. This would be his fourth term! He had already been President for twelve years. He wanted to retire, but felt it was his duty to continue to serve his country.

The Republicans were adamantly* opposed to electing a man for a fourth term. They said Roosevelt's health was too poor for him to run again. He would show them! He drove around in an open car for four hours in a rainstorm.

He won the election, but he soon began to have one cold after another. This went on for a year.

Two days after his inauguration he went to Yalta (YAWL tuh) where he met with Churchill and Stalin. They planned their strategy to defeat Germany. Russia, in exchange for the Kurile islands and other favors, agreed to enter the war to help defeat the Japanese. He said Russia would enter 90 days after the defeat of the Germans.

In April 1945 Roosevelt was in Warm Springs, Georgia. While there he collapsed and died of a cerebral* hemorrhage.* Millions of Americans mourned the death of their beloved President. The world had lost a great leader. The war would come to an end four months later.

Webmaster's note: Roosevelt was President during the years of my childhood. I remember well my mother's tears the day he died. We heard the news on the windcharger-powered radio that occupied a prominent place in the living room of our small house on the farm.

I also remember one building we had on the farm that was built by members of the CCC, the Civilian Conservation Corps, one of Roosevelt's work projects. It was an outhouse with the CCC imprint in the concrete floor.

Other Activities
View a slideshow about Franklin D. Roosevelt

landslide
Pronunciation: 'lan(d)-'slId
Function: noun
an overwhelming victory especially in a political contest
as in "He won by a landslide."

neutrality
Pronunciation: n(y)oo-'tral-ət-E
Function: noun
the quality or state of being neutral especially in time of war

cerebral
Pronunciation: sə-'rE-brəl
Function: adjective
of or relating to the brain

hemorrhage
Pronunciation: 'hem-(ə-)rij
Function: noun
a great loss of blood from the blood vessels especially when caused by injury

FDR Library and Museum
educational programs for the student and teacher

The Legacy of Franklin D. Roosevelt
at The Time 100

Character Above All
Excerpted from an essay by Doris Kearns Goodwin

At biography.com search for Franklin Delano Roosevelt.
Scroll the panel for the "Video & Audio Results".

How to Draw the Life and Times of Franklin Delano Roosevelt
by Melody S. Mis (selected pages) Order here


Credits and Solutions
Portrait in the public domain courtesy of Wikimedia Commons.