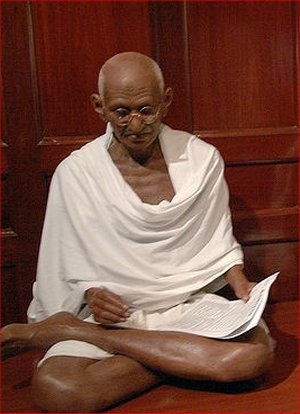 In India there is a social order called the caste* system. The order has existed for thousands of years in the country. The privileged are born into a high caste and the poorest are born into a low caste with little chance of ever advancing to a better state in life. The government abolished the caste system in the 1960's, but it still exists in practice today.

Mohandas Gandhi (mo HAHN dus GAHN de) was born October 2, 1869 and belonged to the Bania caste. Some of the men in his family were prime ministers in the government.

The family was Hindu by religion, and Gandhi's mother was very religious, making vows and observing fasts* in which she would not eat for periods of time.

He was a shy boy and did not do very well in school. Once, according to his autobiography, he misspelled the word "kettle" on a spelling test, and the teacher tried to get him to copy the word from a classmate, but he would not. He simply would not cheat.

He once read a book, a play about a boy named Shravana who cared so much for his blind parents he carried them in slings over his shoulders. The story left such an impression on him he said to himself, "Here is an example for you to follow."

Later he would attend a play about a boy named Harishchandra who was very truthful. This also helped to form the person he would become.

Gandhi and his bride Kasturbai (kus TOOR bI) were married at age thirteen because the family had three boys yet unmarried, and they decided if they had a triple marriage ceremony they could get all three boys married to their brides and just have to plan one celebration. Because of their youth, Kasturbai still spent a lot of time at her parents' home.

Gandhi studied law at University College in London and became a barrister, a lawyer. He tried unsuccessfully to practice law in India, then he went to South Africa to work for a British firm. It was there he experienced prejudice for the first time. As a member of a higher caste, he had always been treated with respect in India, but in South Africa they looked at his dark skin and treated him as an inferior. Even though he had a first-class train ticket, they would not let him sit in his assigned seat. 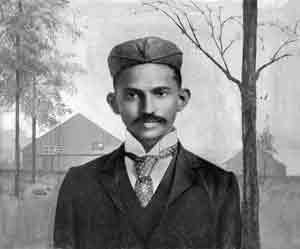 Due to this discrimination he became an advocate for the rights of all Indians. He had found his life's calling.

In protest he did not fight, but rather resisted peacefully. He would use passive resistance to achieve his goals. He was put in prison many times because of his civil disobedience. He coined another word to describe his resistance. He called it Satyagraha (suh teYAH gruh huh), a word which means "truth + persistence". After the South African government recognized Indian marriages and no longer required a poll tax of the Indian people, Gandhi felt he had achieved his goals there and returned to his home country India after spending more than twenty years in South Africa.

The British had ruled India for two centuries. Gandhi set out to obtain freedom for the people of India. The citizens had been oppressed for too long. The cottage industries, businesses they ran in their homes, had disappeared. Gandhi said these ways of making a living must be restored to the poor people. He urged non-violent resistance. Multitudes were arrested because they sat down and refused to move, work, or go to school.

In 1922 he was sentenced to six years in prison, but he became ill and was released after two years. While recovering from the attack of appendicitis he learned to use a spinning wheel, which was a symbol of the home-cottage industry. He also stopped wearing traditional clothing and began to wear the loincloth and shawl thus showing he had renounced worldly values. People began to eulogize* him and call him Mahatma (mu HAHT muh), a term of respect meaning "great-souled". 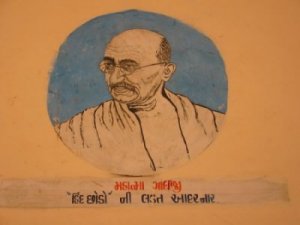 He went on a 21 day fast in Delhi in an effort to bring about changes. He had four goals. They were:

1. Unity between the Hindu and Muslim religious factions
2. Removal of the label "untouchable" from people.
3. The restoration of home industries for people to make a living.
4. Independence from the government of Great Britain.

On December 31, 1929 a civil disobedience movement was started in India and January 26, 1930 was declared Independence Day. It is now called Republic Day. Even though there were declarations of independence, India would not realize freedom from English rule for another seventeen years.

A pivotal* event occurred two months after the declaration. Gandhi and his followers defied the tax on salt. The government required a tax on salt and declared that only the government could manufacture it. Salt was essential to their diet, and the poor could not afford to buy it. He began a march to the seacoast and thousands joined him. They marched 241 miles and it took 24 days. On April 6, 1930 Gandhi bathed in the sea water, then picked up a lump of salt left on the shore. When he did this he was breaking the law. Others in the crowd began doing the same thing. They marched on the Government Salt Depot. Gandhi was arrested. The police beat, hurt, and killed many people, but they did not fight back.

Gandhi was released from prison and invited to the palace in London. He went dressed in his usual attire even though it was cold in England. He met the king dressed only in his loincloth, shawl, and sandals.

However, the British government refused to give up power and the struggle continued. Gandhi announced he would not eat until they relinquished* their power, even if it meant his death. He started the fast on September 20, 1932 while he was in jail. It lasted five days and the government accepted his terms.

On May 7, 1933 he began a 21 day fast, but the government suddenly released him, and changes began to come about. Conditions improved for the people of India.

On February 18, 1943 he began another fast. English leaders called for his release, but Winston Churchill, the prime minister, said, "No". Gandhi survived.

A year later his beloved wife, Kasturba died. The date was February 22, 1944. They had been married since they were teenagers and had four sons.

His efforts to reconcile the Hindus and Muslims failed because the Muslims insisted they needed their own state. They would call it Pakistan. A Muslim lady named Amtus Salam went on a fast. On the 25th day, at Gandhi's insistence, she broke her fast and drank some orange juice he gave to her.

On June 3, 1947 the country was divided into India and Pakistan. On August 15, 1947 British rule ended in India after 200 years. Nehru became the first prime minister of India.

The Hindus living in the Muslim controlled Pakistan were now subjected to persecution and had to flee, leaving their homes and possessions. In the opposite direction Muslims were fleeing India going into Pakistan. Thousands died of starvation.

Gandhi went on a fast to protest the treatment of the two groups toward each other. Some Hindus thought he was favoring the Muslims. On January 30, 1948 a young Hindu radical shot and killed Gandhi. The whole world mourned his passing. He was 78 years old.

His life has influenced many people. Martin Luther King Jr. looked to Gandhi as an example to bring about change for African Americans in the United States, and his life ended tragically in martyrdom* in the same way Gandhi's life had been taken.

Nehru announced Gandhi's death to the nation with the message, "The light has gone out of our lives and there is darkness everywhere."

Albert Einstein, said of Gandhi, "Generations to come, it may be, will scarce believe that such a one as this ever in flesh and blood walked upon this earth."

This biography by Patsy Stevens, a retired teacher, was written November 20, 2008.

Many of the facts in this story were taken from Gandhi's autobiography The Story of My Experiments With Truth. (See links below)
Take the online test

caste
Pronunciation:kast
Function: noun
1. one of the classes into which the Hindu people of India were formerly divided
2. a division of society based upon differences of wealth, rank, or occupation

untouchable
Pronunciation: un TUCH ə bəl
Function: noun
one that is untouchable; especially a member of the lowest social class in India

fast
relinquish
Pronunciation: rih LIN kwish
Function: verb
1. to withdraw or retreat from, to leave behind
2. to give over to the control or possession of another
3. to let go of or release

fast
Pronunciation: fast
Function: noun
1. to go without eating
2. to eat in small amounts or only certain foods

The Caste System of India

Books
Press "Go" to search for books about Gandhi.
Library

The Story of Gandhi
by Rajkumari Shanker (selected pages)