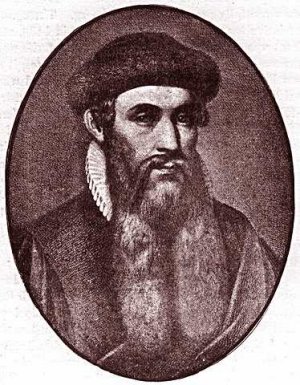 Johanne Gutenberg (YO hahn GOO tn berg) was born in Germany in the city of Mainz. His father was a merchant and worked with the mint where they made the coins. Gutenberg grew up learning a lot about goldsmithing. In 1411 there was political unrest in the area and more than a hundred families had to flee the city. He and his family moved to Strasbourg where his mother's family lived.

Around 1436 there is mention of his name in a court record. It seems he promised to marry a woman and something happened that he broke his promise. We don't know the outcome of it.

At one point in his life he was making what was called the "pilgrim-mirror"; small mirrors attached to a pin. People would pin them on their hats and then when they were looking at an exhibit of religious relics, the image would be caught by the mirrors and their friends at home would benefit. At least that's what they were told when they bought the mirrors.

Gutenberg was trying to invent a method of printing. He didn't have very much money left, but he would not give up. He continued to work on the great project.

While he was teen-ager working at his town's mint* ; the place where money was made, he got the idea for creating books by machine. Up until this time all the books had to be copied by hand. It was very slow, and it took a long, long time to make one book.

After the book was written, they would take a metal punch* and spell out the letters for the title on the front of the leather cover. Maybe this gave Gutenberg the idea for metal letters to write the words on the pages of the book.

His work at the mint helped him in making the metal letters for printing. The letters had to be the same height to look right.

Also at the mint he worked with a stamp press used to make government seals.* He used this knowledge to help him make a printing press. It is believed that the first item ever printed on the printing press was a German poem. Before the printing of the Bible he established a good business printing school books of Latin grammar. It is assumed he had two workshops, one for printing the Bible and another for all other print jobs.

When he needed money he went to John Fust, a moneylender.* He got the money to buy the material to make 46,000 pieces of movable type. He also hired 16 workers.

He was able to print the first Bible, the Gutenberg Bible. Then Fust, his moneylender accused Gutenberg of stealing some of the money. They went to court and Fust won. Gutenberg had to turn over the Bible printing workshop and half of all the printed Bibles. Fust also took Gutenberg's co-worker with him. All this was quite a blow to him.

Some of the first copies still exist today. They are among the world's greatest treasures. 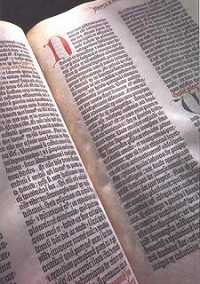 The method he invented for printing remained unchanged for many years.

In his later life he was honored with the title of Hofmann which means "gentleman of the court". He was given a small pension and some yearly grain and wine. He died a highly respected person.

In 1900 the Gutenberg museum was established in his home city of Mainz. Also the International Gutenberg Society was started.

There is a project for the distribution of electronic books called the Project Gutenberg. You can find more than 75,000 books to read online. It is a great service for students and those who like to read.

mint
Function: noun
: a place where coins, medals, and tokens are made...

punch
Function: noun
a : a tool for piercing, cutting, or stamping or for driving a nail
b : a device or machine for cutting holes or notches (as in paper or cardboard)...

seal
Function: noun
: a device with a cut or raised design or figure that can be pressed or stamped into paper or wax to form a mark
(as for certifying a signature)...

Mainz at the time of Gutenberg

Books
Press "Go" to search for books about Gutenberg.
Library


Credits and Solutions
Picture may be used without permission. It is in the public domain and was found at the Library of Congress.