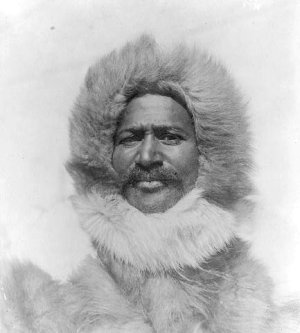 Matthew Henson's mother died when he was very young. After she died, his father moved his family to Washington D.C. Then his father died when Matthew was only eleven years old. The uncle with whom he lived was so mean to him that Matthew ran away from home. He was only thirteen years old.

He had no place to go, so he found a job at a small restaurant, and the owner took pity on him and let him sleep on the floor of the restaurant at night.

Next a sea captain hired him to work on his ship. During the next few years he sailed around the world, learned to read, and learned about ships and navigation.

At one point when he was between voyages, he worked for a man who owned a store which sold supplies to men embarking* on expeditions. This is where he met Robert Peary.

Peary was so impressed with Henson's credentials* he made him his assistant and right-hand-man on his expeditions.

The first trip they made together was to Nicaragua* to chart the jungle there. He spent twenty years of his life traveling and exploring with Robert Peary.

He was with Peary for seven years in the Arctic where they covered 9,000 miles on dogsleds. On the final trip in 1909 they finally reached the North Pole. Henson said he was the first man there because he was at the front of the sled and Peary was riding in the back of the sled.

Peary, of course, took credit for being first since it was his expedition. His attitude* toward his assistant changed, and Henson was pushed out of the limelight.* Peary wanted the attention to be focused only on him, and he did not want Henson to receive credit* for his hard work.

After the expedition, Henson could not get a very good job. Then four years later President Taft assigned to him the title of clerk in the New York Customs House. He held this post for 23 years. During those years Henson attended Harvard University and earned a master's degree. 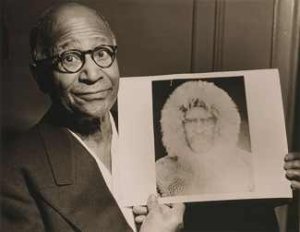 After many years he began to be recognized for his contribution to the polar exploration. In 1944 Matthew Henson received the Congressional Medal of Honor. In 1954 President Eisenhower presented him with an award. Another honor was bestowed on him when the Explorer's Club accepted him as a member. A ship was named after him; the U.S.N.S. Henson, schools were named after him, and other honors were given in his memory.

Matthew Henson was survived by an only son, Anauakaq, whose mother was an Inuit woman named Akatingwah. Anauakaq once visited his father's family and the site where Henson was buried.

In 1988 Henson's body was moved to Arlington National Cemetery where he was interred near the place where Robert Peary was buried. Those in attendance included his American family as well as his Inuit family.

At last, Matthew Henson was recognized for his contribution to the successful North Pole expedition.

Other Activities
Play a Game at Quia

embark
Pronunciation: im-'bark
Function: verb
to begin some task or project as to embark on a career

credit
Pronunciation: 'kred-ət
Function: noun
something that adds to a person's reputation or honor
as to get credit for a discovery

attitude
Pronunciation: 'at-ə-'t(y)ood
Function: noun
a particular feeling or way of thinking about something

Matthew Henson
student activities and links to information about Henson

Matthew Henson
information about his family

Matthew Henson, First Biographies
by B. A. Hoena (selected pages)

Matthew Henson, The Quest for the North Pole
by Kathleen Olmstead (selected pages)

How they got over: African Americans and the call of the sea
by Eloise Greenfield, Jan Spivey Gilchrist (selected pages)