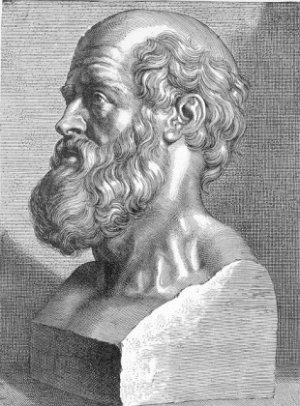 Hippocrates (hih POK ruh teez) lived 400 years before the birth of Christ. He is known as the father of medicine because many of the things he discovered are still practiced today.

During the time when Hippocrates lived, people were very superstitious.* They believed there were four fluids in the body which matched four elements; earth, air, fire and water. They would carry sick people to the temple because they thought the god of medicine, Aesculapius (es kyoo LAY pe us) could heal them. They would say magic words over the patient to try and heal them.

Hippocrates taught that diseases came from natural causes. He had observed many patients and carefully recorded their symptoms and the way their illnesses developed. He would look at the color of the skin, and how the eyes looked. He would look for fevers and chills. He described many illnesses including
pneumonia,* tetanus,* tuberculosis,* arthritis,* mumps,*
and malaria.*

He told his students to carefully observe their patients and to learn from the things they had observed. He said the human body could heal itself and could return itself to good health. The patient was given something to relieve pain, but nothing else was done.

Doctors were told to make sure their hands were clean before they treated patients. He said the operating room should be well lighted and look cheerful. He thought patients in good spirits would heal faster. 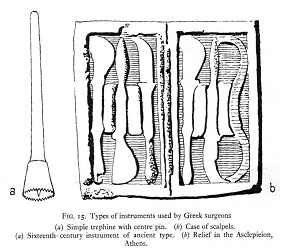 Doctors were told to make sure their hands were clean before they treated patients. He said the operating room should be well lighted and look cheerful. He thought patients in good spirits would heal faster.

Physicians should be men of honor, according to Hippocrates. He encouraged them to work as hard as possible for the good of the sick.

The Hippocratic (hip uh CRAT ick) Oath was named for him. It included rules of conducts for doctors and even today doctors still honor a form of the oath.

Other Activities
View a slideshow about Hippocrates

superstitious, influenced by superstition
Pronunciation: 'soo-pər-'stish-ən
Function: noun
a belief or practice resulting from ignorance, fear of the unknown, or trust in magic....

pneumonia
Pronunciation: n(y)u-'mO-nyə
Function: noun
: a disease of the lungs marked by inflammation
and congestion and caused by infection or irritants

tetanus
Pronunciation: 'tet-ə-nəs
Function: noun
a dangerous infectious disease marked by stiffness and spasms of the muscles
with locking of the jaws and caused by a poison made by a bacterium
that usually enters the body through a wound....

tuberculosis
Pronunciation: t(y)u-'bər-kyə-'lO-səs
Function: noun
: a disease of human beings and some other vertebrates
caused by a bacterium and usually marked by wasting, fever, and formation of cheesy tubercles
that in human beings occur mostly in the lungs

mumps
Pronunciation: 'məm(p)s
Function: noun singular or plural
: a contagious disease caused by a virus and marked by fever
and by swelling especially of salivary glands

malaria
Pronunciation: mə-'ler-E-ə
Function: noun
: a disease caused by protozoan parasites in the red blood cells,
passed from one individual to another by the bite of mosquitoes,
and marked by periodic attacks of chills and fever

Hippocrates (audio)
The Hippocratic Oath (audio)
Engines of Our Ingenuity.

Medical History of the Presidents of the United States

Books
Press "Go" to search for books about Hippocrates.
Library

You do not need permission to use the picture on this page. It is in the public domain.