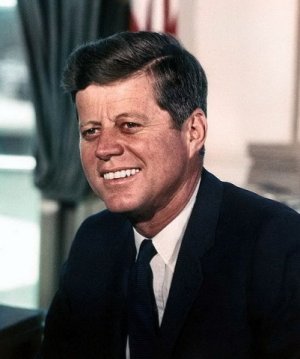 John Fitzgerald Kennedy was the son of Joseph Kennedy and Rose Fitzgerald Kennedy. There were nine children in the Kennedy family; four sons and five daughters. John was known as "Jack". His older brother Joseph Jr. was killed in World War II. His younger brothers were Robert F.and Edward "Ted" Kennedy.

When Jack graduated from high school, his classmates voted him "most likely to succeed". He attended college for a semester at Princeton University in England, then went to Harvard where he graduated in 1940. After doing some graduate work at Stanford University, he enlisted in the U.S. Navy.

After the Japanese attacked Pearl Harbor on December 7, 1941, Kennedy applied for sea duty. He was in command of a PT* (patrol torpedo) boat. One night a Japanese ship cut his boat in two. He and his men held onto the wreckage for hours, and in spite of an injured back, he was able to save his men and get them safely to shore. They were rescued five days later. He was awarded the Navy and Marine Corps Medal and also the Purple Heart for being wounded in battle.

The Kennedy's wanted their sons to be political leaders, and they were all successful. Robert F.Kennedy would serve as his brother's Attorney General, but would be assassinated,* and Edward "Ted" Kennedy was a United States Senator.

Jack began his career in 1946 when he was elected to the U.S. House of Representatives. He was only twenty-nine years old and looked very young. In 1952 he sought and won a seat in the United States Senate and became Senator Kennedy.

That same year he met Jacqueline Bouvier at a dinner party arranged by mutual friends, and they married the next year. "Jackie" was very popular with the people. Women tried to look like her and dress as she dressed. The Kennedy's had two children, Caroline and John Jr. Another son, Patrick, was born prematurely* and did not survive.

With the strong support of his family he was elected to the presidency in 1960 defeating Richard Nixon by a very narrow margin of popular votes, but Kennedy gained 303 electoral votes compared to 219 for Nixon. At the age of forty-three he was the youngest man ever elected President.

Kennedy had a new program he called "The New Frontier". He wanted to help the poor people and pressed for an increase in the minimum wage from $1 to $1.25 an hour.

He started the Peace Corps and thousands of young people went to other countries to help people in those countries raise their standard of living.

He championed civil rights reform. It was during his presidency that the "freedom riders" worked to get more equitable treatment for African Americans in America. Martin Luther King along with 200,000 of his supporters staged a Freedom March in Washington DC in support of Kennedy's efforts to gain equal rights for them.

In 1961 Cuban rebels, with U.S. backing, tried to overthrow the Cuban dictator, Fidel Castro. The attempt failed, and the Bay of Pigs invasion became an embarrassment to the Kennedy administration.

The next year Soviet missile sites were discovered on Cuba. Kennedy sent ships to prevent further buildup by the Soviets. The nation was on the brink of nuclear war until Russia promised to remove all the weapons they had placed on the island, which is only about 100 miles from the U.S. mainland.*

During this tumultuous time the communists built a wall in Berlin to prevent East Berlin citizens from escaping into West Berlin. This wall would remain in place for nearly 30 years.

One bright spot in Kennedy's administration was the launching of John Glenn as the first American astronaut to be sent into orbit. After Kennedy's death President Lyndon Johnson renamed NASA's Cape Canaveral. It would be called the John F. Kennedy Space Center.

In 1963 President and Mrs. Kennedy were visiting in Dallas, Texas. A motorcade* was transporting them through the streets when gunshots rang out, and President Kennedy was shot and killed. 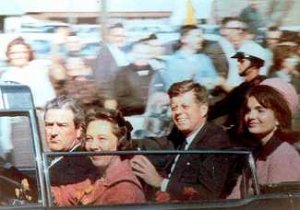 The shots had come from a sixth-floor window of the Texas School Book Depository* building. An employee in the building, Lee Harvey Oswald, fled the building right after the shots were fired. He was arrested in a theater a short time later. The police questioned him for two days. He said he didn't fire the shots, but the mail-order rifle had been purchased by Oswald for $12.78, and his palm prints were found on the gun.

When the two days were over, the police were moving Oswald from the city jail to the county jail. As they led him out, Jack Ruby, a Dallas nightclub owner, shot and killed him.

The world joined the American people in mourning the assassination of their leader. Representatives from 90 countries attended the funeral. John F. Kennedy was buried at Arlington National Cemetery. His young widow, Jackie, lighted an "eternal flame" which burns over his grave.

Other Activities
View a slideshow about John F. Kennedy

premature
Pronunciation: 'prE-mə-'t(y)u(ə)r, -'chu(ə)r
Function: adjective
happening, coming, existing, or done before the proper or usual time; especially :
born after a period of pregnancy of less than 37 weeks as premature babies

mainland
Pronunciation: 'mAn-land, -lənd
Function: noun
a continent or the main part of a continent as distinguished
from an offshore island or sometimes from a cape or peninsula

depository
Pronunciation: di-'pahz-ə-'tOr-E, -'tor-
Function: noun
a place where something is deposited especially for safekeeping

John F. Kennedy, The Man and the President
video, 8 minutes

JFK
video lesson
(Click on the topics "Interactive Media Files", be sure volume is turned up.)

At biography.com search for John F. Kennedy.
Scroll the panel for the "Video & Audio Results".