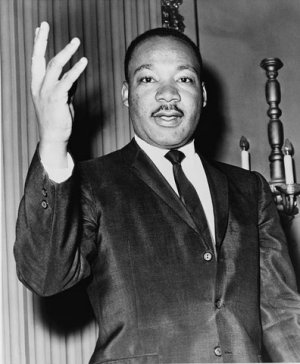 Martin Luther King Jr. was born in Atlanta, Georgia in the large twelve room house of his parents on January 15, 1929. His grandparents also lived in the house.

He was born during a time when black people did not have the rights which they have today. M.L., as he was called, first experienced racial discrimination* when their white neighbors refused to let him play with their boys. This was hard for him to understand because the boys had grown up as neighbors and had played together for years.

At a later time he and his father were asked to move to the back of a shoe store to be fitted with shoes. They left without buying anything. These early incidents made a deep impression on the young boy.

When he was five years old his mother persuaded the first grade teacher, Miss Dickerson, to make room for him in her class. Even though he started several weeks after the other children, he soon caught up with them academically and even surpassed* them before the year was over.

He attended Oglethorpe Elementary School which was a private school associated with Atlanta University. His parents paid $25 a year which covered all his expenses. Miss Lemon, his teacher taught him to be independent. She taught him if there was an injustice, he could rebel, but still keep his dignity and find quiet ways to resist. She inspired her students to learn about black history and take pride in their heritage.* She took the class on field trips to visit with successful black businessmen and professionals. Her students started each day by singing the song, Lift Every Voice and Sing.

He attended Booker T. Washington High School in Atlanta. He was younger than most of the students and also skipped some subjects because he already knew the subject matter.

On one occasion he and his teacher were riding on a bus. When the bus filled up with people, the driver asked them to stand up and let two white people have their seats. It was the law. Martin saw the injustice of it, and he never forgot that incident.

When he was 15 years old he entered Morehouse College. After two years in school he decided he could best serve others by becoming a minister. He became assistant minister of the Ebenezer Baptist church where his father was minister. The following year he graduated from college. He was only 19 years old.

He then attended Crozer Theological Seminary in Chester, Pennsylvania. While he was at Crozer he began to study the teachings of Mahatma Gandhi, a man who brought about changes in India through "passive* resistance". Gandhi urged people to not fight, but to protest peacefully. Martin saw this method of non-violent resistance as the answer to the unfair treatment blacks received in America.

When he was a senior at Crozer he was elected class president and also won an award as the most outstanding student.

He worked on his Ph.D. at Boston University. It was there he met Coretta Scott who would become his wife. They would eventually have four children; two boys and two girls. When he graduated from Boston University he became the minister of the Dexter Avenue Baptist Church in Montgomery, Alabama.

Blacks and whites were segregated* in Montgomery, attending different schools and sitting in separate sections on buses. Sometimes blacks would be forced to stand on a bus even though there were empty seats in the "white" section at the front of the bus. On December 1, 1955 Mrs. Rosa Parks refused to give up her seat on a bus. The police were called and she was arrested. This event led to a revolt all over America.

E.D. Nixon, who was a train porter, bailed Rosa out of jail, and he started contacting others about starting a boycott* of the buses. "Boycott" means they would refuse to ride the buses until they received fair treatment. The newspapers heard of the plan and wrote an article. This article was very helpful in getting the word out about the boycott.

The black leaders were asking for courteous treatment from the drivers and seating on a first-come, first-served basis, with whites filling the buses from the front of the bus and blacks from the rear. No one was to be asked to give up a seat for someone else. They also wanted black drivers in the areas where they lived.

The boycott lasted for more than a year and they walked, rode bicycles, and rode in car pools to get to work. In December of 1956 the Supreme Court ruled that bus segregation was unlawful.

In 1957 Dr. King helped establish the Southern Christian Leadership Conference (SCLC) and he became its president.

Black students began to stage "sit-ins" at lunch counters. Up until this time they had been forbidden food service at eating places.

Then the "freedom riders" began riding buses from state to state and doing "sit-ins" at lunch counters and "white" waiting rooms. The Jim Crow laws that said blacks were to be denied certain rights began to be challenged in many cities in America.

Peaceful marches were organized and people were arrested because they were taking part. Even little children were sprayed with water hoses and arrested! On August 28, 1963 Martin Luther King and other leaders led a march into Washington D.C. Over 200,000 people marched from the Washington Monument to the Lincoln Memorial. It was here Dr. King delivered his "I Have a Dream" message.

In 1964 he was awarded the Nobel Peace Prize in Norway. He gave the $54,000 prize money to the civil rights groups which were working to secure the rights blacks deserved.

Dr. King was put in jail 30 times for his resistance. Some people tried to kill him. Then on April 4, 1968 a gunman did murder him in Memphis, Tennessee. His widow Coretta Scott King passed away January 30, 2006.

Many changes have taken place in America because of the leadership of Martin Luther King. In 1986 when Ronald Reagan was president, Congress passed a law establishing a national holiday, Martin Luther King Day. 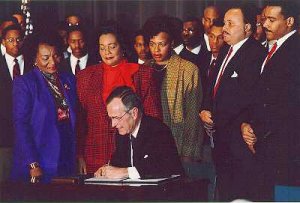 discrimination
Pronunciation: dis-"krim-ə-'nA-shən
Function: noun
the treating of some people better than others
without any fair or proper reason

surpass
Pronunciation: sər-'pas
Function: verb
1 : to be greater, better, or stronger than
2 : to go beyond the reach, powers, or capacity of

heritage
Pronunciation: 'her-ət-ij
Function: noun
something acquired from the past

segregate
Pronunciation: 'seg-ri-"gAt
Function: verb
to separate from others or from the general mass :
ISOLATE; especially : to separate by races

boycott
Pronunciation: 'boi-"kaht
Function: verb
Etymology: named for Charles Boycott 1832-1897 estate manager in Ireland.
to join with others in refusing to deal with a person,
organization, or country usually to express disapproval
or to force acceptance of terms

Research Links
The King Center
dedicated to the memory of Dr. King

At biography.com search for Martin Luther King.
Scroll the panel for the "Video & Audio Results".