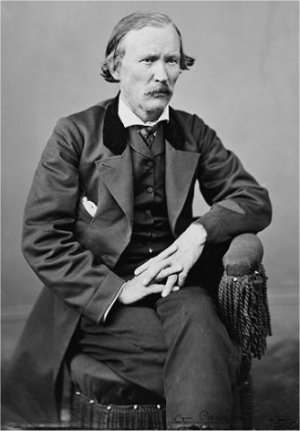 Christopher Carson, known as "Kit" was born on Christmas Eve 1809 in Kentucky. His father was a farmer. Kit never had an opportunity to go to school and remained illiterate* during his lifetime. He was apprenticed to a saddle maker when he was 15 years old.

Carson joined a group of traders and moved with them to Sante Fe, New Mexico. He worked as a cook for a while and then was hired by a wealthy trader to be his interpreter because Carson had learned the Spanish language during his stay in New Mexico, but after a while he craved more adventure and joined a group of men who were trapping beavers. 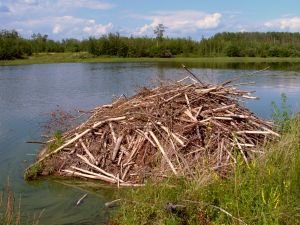 Carson was not a very large man, standing 5 foot 6 inches tall, but he was brave, and once when the camp was approached by a band of 500 Indians, repelled the group by telling them if they didn't leave, the trappers would attack them and kill them. Even though they were only a handful of men, the Indians were convinced and left peacefully.

After several incidents in which the Indians stole horses from them and vice versa, Carson and two of his companions started off on their own to trap beaver. After a successful hunt they return to Taos, New Mexico.

Once Carson challenged a Frenchman, a Captain Shunan, who was boasting and knocking down the other men. In the duel that took place Carson was able to wound the Captain and divert his shot and save his own life. Captain Shunan didn't give them any more trouble.

Kit Carson learned the Indian sign language and took an Arapaho Indian as his wife. Her name was Waa-nibe or Grass Singing. They had one or two children. Their daughter was Adeline. After Grass Singing died he was married briefly to a Cheyenne* Indian woman, but that marriage ended in divorce, and at that time he sent Adeline to a school in St. Louis, Missouri to receive an education.

When he was 33 years old, he married a 15 year old Hispanic girl, Josefa Jaramillo in Taos. Her family opposed the marriage because of the age difference and the fact that Carson was an Anglo foreigner. Carson loved her dearly and during their years together they had seven children.

In 1842 Carson joined John Fremont as a guide to map the Oregon Trail. They left St. Louis on an overland route to the Pacific. They traveled 1200 miles that summer. Carson was always loyal to Fremont, and when Fremont published his expedition* he praised his guide. People used these publications as travel guides as they moved west.

Carson was chosen to carry dispatches to Washington. They knew if anyone could get the messages through, he would be the man to do it.

Many twenty-five cent novels were written about Kit Carson. The editors of the books used his name without his permission. Ironically,* Carson was never able to read one of them himself because he was unable to read. Comic strips and silent movies were also made about his "adventures".

Carson was once a part of a rescue party attempting to rescue the wife of Mr. James White from a group of Apache Indians who were holding her captive. The Indians killed her as she was trying to escape. One of the items the party found at the site was a Kit Carson adventure book the woman evidently had been reading. She possibly had hopes he could rescue her, knowing he was in the area.

There was constant strife between the white settlers and the Indians. As the settlers began moving west they took over the land on which the Indians formerly lived. The Indians raided and killed the settlers to get provisions.

Brigadier General James H. Carleton who was the commander in New Mexico contacted Kit Carson to help alleviate* the Indian situation. His orders were to kill all the men of the Mescalero Apache tribe, but Carson refused to do it.

The government wanted the Navajo Indians relocated. Carson adopted a "scorched earth"* policy to force the Navajo off the land. With the help of the Ute tribe, who were enemies of the Navajo, he burned the Navajo's homes, cornfields, and food supplies. They torched 1,000 peach trees and killed their livestock.. The starving Navajos were hiding in the canyons and caves. Their spirit was broken, and they were ready for a truce. He gave them food and guaranteed protection if they moved to the Bosque Redondo (bos KA rih DON doe) Reservation.* The Indians said he acted without mercy and that he deserted them on the trip. 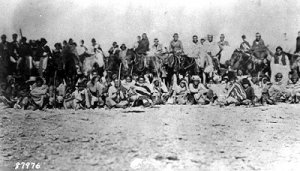 Long Walk of the Navajo

The march to the reservation in the spring of 1864 is remembered as "The Long Walk". Nearly 9,000 Navajos started the trip. 350 died during the trip and 2,000 of them escaped and were missing. They would stay stay for four years in that location, and then were returned to the area which is the Navajo reservation today.

Carson made a treaty with the Plains Indians and established a permanent reservation for the Utes in their land.

In 1866 Carson was appointed Brevet Brigadier General, a temporary rank. In 1868 he was appointed Indian Agent. The Indians all knew him and many respected him as a truthful man.

Carson left the army and began ranching in Colorado. His wife Josefa died shortly after giving birth to their last child. Carson had been having chest pains for some time. The doctors said he had an aortic* aneurysm* and they didn't give him long to live. He died at the age of 59 just a month after Josephine died.

Excerpts from "The Life of Kit Carson"
Take the online test

Cheyenne
shi AN
Function: noun
a member of an American Indian people of the western plains of the U.S.

expedition
ek spuh DISH un
Function: noun
a journey or trip undertaken for a specific purpose (as war or exploring)

irony
I ruh ne
Function: noun
inconsistency between an actual and an expected result of a sequence of events

alleviate
uh LE ve ate
Function: verb
to make easier to put up with : to relieve

scorched earth
Function: noun
land stripped of anything that could be of use to an invading enemy force

reservation
rez uhr VA shun
Function: noun
something reserved for a special use; especially : an area of public lands
so reserved (as for use by American Indians)

aortic
a ORT ik
Function:adjective relating to the main artery that carries blood from the heart to
branch arteries by which it is carried throughout the body

aneurysm
AN yuhr iz uhm
Function: noun
an abnormal widening or ballooning of a portion of an artery,
related to weakness in the wall of the blood vessel.

Kit Carson and the Santa Fe Trail
contains details of the attempted rescue of Mrs. White

Stories of the Trail of Tears
National Park Service

Kit Carson and the Indians
by (selected pages) Order here

The life and adventures of Kit Carson: the Nestor of the Rocky Mountains
by De Witt Clinton Peters (selected pages) Free Google eBook