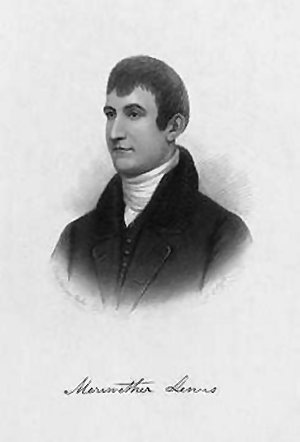 Meriwether Lewis was born on the family plantation in Virginia. He had an older sister, Jane, and later a little brother, Reuben, would be born into the family.

His father fought in the Revolutionary War and died when Meriwether was only five years old.

As a young boy Meriwether enjoyed hunting in the woods, and sometimes he would go out alone at night in all kinds of weather to explore.

His mother remarried and Captain John Marks became his stepfather. The family left the plantation in the care of a relative and moved to Georgia. When he was 13 years old he returned to Virginia for schooling and to learn how to manage the 2,000 acre plantation his father had willed to him.

When he was 18 his stepfather died and his mother moved back to Virginia. Meriwether had come of age and could now manage the plantation himself.

Later he enlisted in the Virginia Volunteer Corps and served well. He was promoted to lieutenant and then to captain.

He had a friend and neighbor who had been watching Meriwether grow up. This friend became President of the United States. His name was Thomas Jefferson. Jefferson liked the qualities he saw in Meriwether and asked him to come to Washington to become his personal secretary. He paid him $500 a year and gave him room and board in the White House. What an opportunity for young Meriwether!

Jefferson had a plan to send an expedition to explore the land from the Mississippi River westward to the Pacific Ocean. He asked Congress for $2,500 to fund* the project. A year earlier in 1803 the United States had bought over 800,000 square miles of land from France for $15,000,000. It was called the Louisiana Purchase. Lewis and Clark would cross this land on their expedition.

The President groomed Meriwether for the job by letting him study with great teachers. He studied botany,* fossils,* astronomy, and mathematics.

Will Clark, his long-time friend, had been chosen to accompany him. Lewis insisted the two of them would each be referred to as captains of the expedition.

Meriwether prepared three boats; a large 55 foot keelboat and two smaller ones. They had to carry a lot of supplies and ammunition; six tons, 12,000 pounds in all. He prepared the gunpowder in lead containers. When the gunpowder was used up from a container they could melt it down to make bullets for their guns.

Included in the supplies were trinkets, beads, and mirrors which would be gifts to the Indians.

Two important people who joined them at the Mandan Indian villages were Touissant Charbonneau ( too SAN SHAR buh no) and his Shoshone wife Sacagawea (SAK uh juh WEE uh or suh KAH guh we uh). He had bought her as a slave from the Blackfoot Indians who had kidnapped her from her people.

Sacagawea was the interpreter* for the group, and when the Indians saw her with her tiny baby, they felt they had nothing to fear from these strangers. The baby was only two months old when her journey with them began.

The members of the expedition suffered many hardships as they navigated the Missouri River, crossed the Stony (Rockie) Mountains, and followed the Columbia River to the west coast of the country to their first view of the Pacific Ocean. The trip had taken them a year and a half. During that time Meriwether had kept a detailed journal of events, drawn maps, collected plant specimens, and managed to pass peacefully through the Indian territory.

Now they had to retrace their steps back over the mountains and return.

When they got back home each man who had accompanied them was paid in cash, and a record was made of each man's name. The government would give each one of them a gift of land.

Congress gave Meriwether 1,500 acres of land and made him governor of all the Louisiana Territory. Will Clark was given 1,000 acres of land. They made him Indian Agent and gave him the title Brigadier General.*

The end of the story, however, is different for the two men. Three years after their return Meriwether Lewis died tragically from gunshot wounds. Will Clark married, had a family, became governor of the Missouri Territory, and lived to be sixty-eight years old.

This biography by Patsy Stevens, a retired teacher, was written in 2005.
Take the online test

fossil
Function: noun
a trace or print or the remains of a plant or animal of a past age preserved in earth or rock

fund
Function: verb
to supply funds for as a program funded by the state

Lewis and Clark (audio)
Engines of Our Ingenuity.

"Conquest, The True Story of Lewis and Clark"
online book

Lewis and Clark
video lesson (be sure volume is turned up )

At biography.com search for Meriwether Lewis.
Scroll the panel for the "Video & Audio Results".

Streams to the river, river to the sea: a novel of Sacagawea
by Scott O'Dell (selected pages) Order here

A Picture Book of Sacagawea
by David A. Adler (selected pages) Order here

Lewis and Clark for Kids: Their Journey of Discovery with 21 Activities
by Janis Herbert (selected pages)

A Picture Book of Lewis and Clark
by David A. Adler (selected pages)