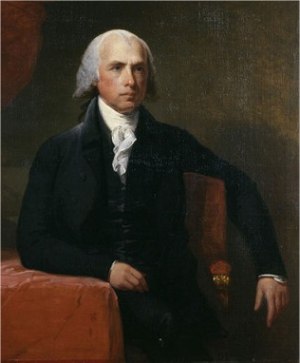 James Madison was born in Virginia. He had eleven younger brothers and sisters. He was sick a lot when he was a child and the family hired a private tutor* to teach him until he was 11. Then he went to a boarding school which was 70 miles from his home. There he spent five years studying Latin, Greek, French, Italian, algebra,* geometry,* and geography.

When he was 18 he entered college. He studied hard and finished college in two years instead of three.

After he graduated, he didn't know what he wanted to do. He could go back to the family plantation and farm, or he could become a minister. He thought about becoming a lawyer. He would just keep studying.

He decided to help in the government. He served in the Continental Congress. Some say that without James Madison, the Constitution* would not have been written. He is called the Father of the Constitution.

He had studied a lot and taken a lot of notes. When the men met to talk about a constitution, Madison spoke 161 times. He knew about every subject being discussed.

He was elected president in 1809. His wife Dolley enjoyed entertaining in the White House. It is said she had a smile and a pleasant word for everyone.

After he retired from being the president, he and Dolley returned to Montpelier, the family estate. He died there in 1836. His wife then returned to Washington and lived there for the last 13 years of her life. 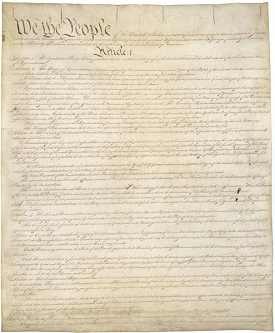 Constitution of the United States

The Making of the Constitution and the Foundation of the U.S. Legal System and Government written by target="top"Aaron Schulman and Sylvia Fraley

Other Activities
View a slideshow about James Madison

Play a Game at Quia

tutor
Pronunciation: 't(y)oot-ər
Function: noun
: a person who has the responsibility of instructing
and guiding another...

algebra
Pronunciation: 'al-jə-brə
Function: noun
: a branch of mathematics that explores the relationships
between numbers and the operations used to work with them
and that uses letters or other symbols to represent them ...

constitution
Pronunciation: kahn(t)-stə-'t(y)oo-shən
Function: noun
a : the basic beliefs and laws of a nation, state, or social group
that establish the powers and duties of the government
and guarantee certain rights to the people in it
b : a document containing a constitution ...

Events Leading to the War of 1812 Lesson Plan
Lesson Snips.com
(You must register to access lessons.)

The British Attack on the Capital Lesson Plan
Lesson Snips.com

The Articles of Confederation
video lesson
(Click on the topics "Interactive Media Files", be sure volume is turned up.)

Father of the Constitution: A Story About James Madison
by Barbara Mitchell (selected pages) Order here