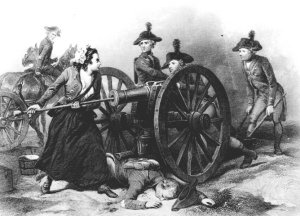 Mary Ludwig was born October 13, 1754. Her father John was a dairyman. When she was 15 years old she went to work as a domestic helper for the Callender family who lived in Carlisle, Pennsylvania which was over 140 miles from her home in Trenton, New Jersey. Travel was slow in those days so she moved a very long way from her family.

While working for the Callender family she met John Hays, a young man who had a barber shop not far from the Callender home. He would watch her as she swept the sidewalk, and soon a romance blossomed. They were married in 1769.

There was discontent in the colonies over their treatment by the English. War would soon be upon them. John was a patriot and became a soldier where he served as a gunner in the artillery* division.

When his regiment* left, Mary remained with the Irvines. Her parents wanted her to come home to New Jersey. Her husband wanted to see her and asked her to come to him. She started out on the long ride on horseback.

General George Washington marched his troops into New Jersey. The battle of Monmouth (MON muth) was fought on June 28th, 1778. Twenty-four year old Mary (Molly) was at the battlefront. The battle lasted all day. It was a long, hot summer day. Some say fifty soldiers died of thirst that day. Molly carried water for them in a pitcher from a nearby spring.

As she approached the line of battle she saw her husband was wounded. (Some versions of the story say he died on the battlefield.) The cannon was ordered to the rear since there was no one to fire it. Molly bravely took her husband's place and kept the gun in action. The soldiers called her "sergeant". She was also sometimes referred to as "Major Molly". Molly's actions on the battlefield certainly contributed to the success of the battle that day. Years later a monument was erected to her on the site of the battlefield.

Some poetic license* may have been taken in the poems which were written about her. All the facts cannot be verified.


"Moll Pitcher she stood by her gun,
And rammed the charges home, sir
And thus on Monmouth's bloody field
A sergeant did become sir." 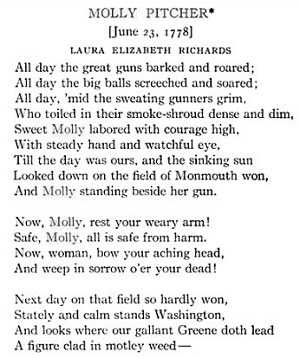 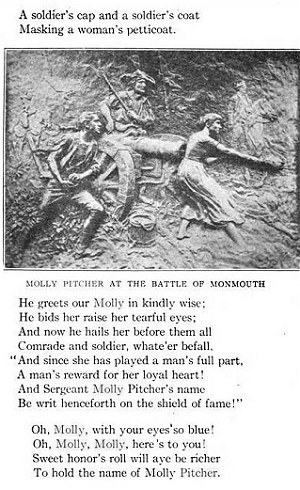 
After her first husband died, she married George McKolly, another soldier, and she became Mollie McKolly. (Sometimes her last name was spelled McCauly).

For many years after the Revolutionary War she lived on the army post and cooked and did washing for the soldiers. She also ran a small store in Carlisle.

In 1822 the Pennsylvania Legislature granted her an Annuity* of $80 a year for the "services she provided during the Revolutionary War". The bill passed with a unanimous* vote.

On one occasion in 1826 when Molly was over 70 years old, she rescued two young children who had fallen into a quarry.* One of the people she rescued later said of her, "Molly was a brave woman and had a kind word for everyone." She also said that after the war was over, people referred to Molly as "the heroine of the battle of Monmouth".

Among the many stories told about her that cannot be verified are these two accounts:

(1) It is said that on the battlefield George Washington complimented her on her bravery.
(2) She found a wounded, but still alive soldier named Dilwyn among the dead in a burial pit and nursed him back to health.

Molly Pitcher died January 22, 1832. She was survived by a son John and a grandson who was eleven years old.

This biography by Patsy Stevens, a retired teacher, was written July 4, 2011.
Take the online test

artillery
Pronunciation: ar-TIL-(ə)-rE
Function: noun
large firearms such as a cannon or rockets

unanimous
Pronunciation: yoo-NAN-ə-məs
Function: adjective
agreed to by all such as a unanimous vote

license
Pronunciation: lIs-ən(t)s
Function: noun
liberty of action that is carried too far

A short history of Molly Pitcher, the heroine of the Battle of Monmouth
by John B. Landis 1905 (full view) Google eBook

Bring us water, Molly Pitcher!: a fun song about the Battle of Monmouth
by Michael Dahl (selected pages) Order here

Molly Pitcher: heroine of the War for Independence
by Rachel A. Koestler-Grack (selected pages)

Heroes of the Revolution
by David A. Adler (selected pages)