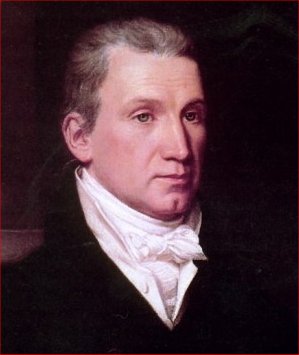 James Monroe had a great influence on the history of America, even though he was not a brilliant* person. He was somewhat shy and was not even a very good public speaker. But he helped the country to grow and become strong as a young nation.

His famous Monroe Doctrine helped to make the country secure by warning the countries of Europe not to interfere in the nation's business.

He was a patriot and a soldier in the Revolutionary War.

He studied law at the College of William and Mary. He looked up to Thomas Jefferson and read every book about law Jefferson told him to read. When he came to a problem, he would discuss it with his friend until he understood it. He finally left college so he could continue to study with Jefferson.

Monroe was a good friend. Jefferson said of him that you could safely tell him anything and he would keep it confidential.* "A better man cannot be," he said. Another time he said of Monroe, "Turn his soul wrong side outwards, and there is not a speck on it." 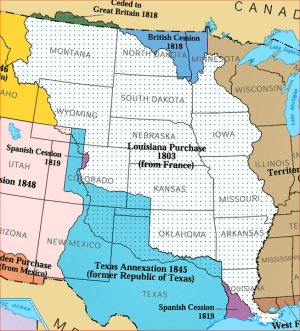 
When Jefferson was president, Monroe helped to arrange the Louisiana Purchase. This was a large area of land which was later divided into 15 states. Then when he became president, Florida was purchased from Spain. The country was growing very fast!

When he had a decision to make, he would ask experts and get their opinions before he made his final decision.

He always tried to see other people's viewpoints* and he tried to always be fair. By doing this, he was able to make friends with those who opposed him. The two terms he served as president became known as the Era of Good Feeling.*

Other Activities
View a slideshow about James Monroe

brilliant
Pronunciation: 'bril-yənt
Function: adjective
a: very impressive as a brilliant career
b : very smart or clever such as a brilliant student or a brilliant idea
- bril liant ly adverb

viewpoint (point of view)
: a way of looking at or thinking about something...

era
Pronunciation: 'ir-ə, 'er-ə, 'E-rə
Function: noun
1 : a period of time beginning with some special date or event as the Christian era
2 : an important or outstanding period of history as the Revolutionary era

James Monroe
video lesson
(Click on the topics "Interactive Media Files",
be sure volume is turned up.)

How to Draw the Life and Times of James Monroe
by Miriam J. Gross (selected pages) Order here


Credits and Solutions
Portrait of James Monroe is in the public domain
courtesy of Wikimedia Commons.