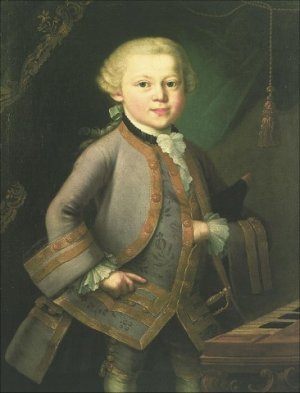 Wolfgang Amadeus Mozart (WOLF-gang, ah-muh-DAY-us, MOE-tsart) was born in Salzburg, Austria on January 27, 1756. His father, Leopold, was a bookbinder. He was also a violin teacher and became famous when he published a method of study for the violin.

Wolfgang's older sister Maria Anna was called Nannerl by the family. Her father began teaching her to play the clavier when she was seven years old and Wolfgang also showed an interest very early. Both children were musical prodigies,* having exceptional talent in that field.

Wolfgang learned to play the harpsichord. He composed his first song when he was four years old even before he had learned to read. Shortly before his fifth birthday he was able to learn a scherzo in 30 minutes. He published his first composition when he was eight years old.

Once he picked up a violin and though he had never had a violin lesson, he was able to sight read perfectly a piece written for the violin. At a later time while visiting Rome he heard a choral work being performed and was able to remember it and write it down note for note. His father was amazed.

Leopold realized the extraordinary capabilities of his children and knew people would pay to see them perform. So the family embarked on a tour that would take them to many countries. When they performed for the Empress* Maria Theresa of Austria, Mozart at the end of the concert jumped up on her lap, put his arms around her neck and kissed her. She rewarded him with a little suit decorated with gold braid. (It was possibly the suit he was wearing in the picture at the top of this page.) Another person in the royal family was the child Marie Antoinette who would later become queen, and during the French Revolution would be executed by guillotine.*

After that concert they began to get invitations to perform all over Europe. They gave public and private concerts lasting from 1 1/2 to 3 hours each, usually giving two concerts a day. It was a grueling* schedule for the children, but it was the only life they had known.

At one point on the tour when he was not quite seven years old Wolfgang became ill. He was treated with glasses of milk with crushed melon seeds and poppy seed in it. He recovered from whatever was ailing him.

Wolfgang on the long carriage trips composed music in his head. It was impossible to write it down due to the jostling of the carriage on the rough roads. The trips were long and hard. In the winter they suffered with the cold.

The boy also fantasized and created in his imagination a kingdom he called the Kingdom of Back of which he was the king. Had he been living today he probably would have created a video game of it.

After a long tour they arrived in Paris on November 18, 1763. Nannerl was eleven and Wolfgang was nearly seven. From Paris they went to England where they performed at Buckingham Palace. In London Wolfgang met Johann Christian Bach who was the youngest son of Johann Sebastian Bach. Later J.C. Bach would influence Mozart in his style of writing.

Leopold became ill and spent months in recovery. It was financially hard on the family. The children couldn't perform and there was no money coming in for appearances. During this period Wolfgang, with a lot of time on his hands, started composing his first symphony* and his sister copied the parts on paper.

The family finally had to return to the continent. Wolfgang was nearly nine, but he was small for his age and his father advertised his age as eight so he would appear younger and more precocious.*

In September they reached The Hague in the Netherlands. Nannerl became very ill. In those days they "bled" people to treat them. Of course, this only made her worse. It was determined that she had typhoid fever. Then Wolfgang became ill with the same symptoms. They both finally recovered and the family returned to Salzburg in 1766.

In 1767 Mozart composed his first opera. He directed the opera himself at the age of fourteen. It was during this time he became ill with smallpox which left him scarred for life.

In 1769 he was appointed Konzertmeister* at the Salzburg court by the Archbishop. He held that position for about ten years.

In later operas he partnered with Lorenzo Da Ponte who wrote the words and Mozart wrote the music. They wrote The Marriage of Figaro and Don Giovanni together. Antonio Salieri, who wrote more than forty operas, was jealous of Mozart. (Salieri's role is embellished in the 1984 fictionalized movie Amadeus.)

In 1777 he visited his uncle and spent time with his cousin Maria Anna who was called Bäsle. They had a brief romantic relationship.

When Mozart traveled he carried a small spinet keyboard with him in the carriage so he could compose as he traveled.

While Mozart was in Paris he composed many pieces including symphonies, concertos, and sonatas. Tragically, during this time his mother, who was with him there, died of unknown causes. His father, who had stayed at home for fear of losing his job if he left Salzburg, persuaded him to return home.

On his way home he stopped at the Weber's house and there met Aloysia Weber. He fell in love with the 16-year-old singer and proposed marriage, but she refused him. He would later marry her sister Constanze, against his father's advice. However, they were happy living in Vienna and their future seemed to be bright there. Their first son Raimun Leopold was born, but only lived a couple of months. They had six children, but only two of them survived to adulthood, Karl and Franz Xaver.

While in Vienna Mozart played for Haydn, the great composer. Haydn paid a great compliment to the young composer when he remarked to Mozart's father, "Your son is the greatest composer known to me, either in person or by name."

In December 1784 Mozart became a Freemason. Freemasonary is a fraternal organization that was started in the late 16th or early 17th century. Today there are about six million members worldwide. Through the organization Mozart made influential contacts and wrote music for the Masons.

As Mozart began to lose favor with the royal courts he turned to his Masonic brothers for financial assistance. His lifestyle was no longer lavish and he accumulated debts.

Mozart wrote many operas and one of them was called The Magic Flute, a fantasy filled with the values of the Masonic Order. The premiere took place in Vienna. He had worked on it for seven months, but it was not well received during Mozart's lifetime. After his death and in subsequent years it has become popular.

Mozart died in 1791 possibly of an infection. Some say he was poisoned by his rival Salieri, but most people today think he died of natural causes. Mozart himself thought he had been poisoned. He once wrote:

"I shall not last much longer. I am sure that I have been poisoned! I can not rid myself of this thought."
(Look for item #227 on page 125 in the book Mozart The Man and the Artist: As Revealed in His Own Words. )

He believed one of his Italian rivals had poisoned him and he suspected it was Salieri. His rival, no doubt, was glad to be rid of him for he had worked against him for years, but after Mozart's death he did help one of Mozart's sons secure an appointment.

Mozart was destitute when he died and was buried in a pauper's* grave at St. Mark's Cemetery outside Vienna.

Before his death he was working on a Requiem which had been commissioned by a landowner, but Mozart was unable to complete it before he died. Constanze asked Mozart's best students to finish it, so we really don't know how much of it was written by Mozart. Constanze promoted his music and lived for another fifty years after her husband's death.

During his short lifetime of thirty-five years he wrote 626 pieces of music. Ludwig von Köchel in 1862 cataloged the works of Mozart, hence you will see the "K" followed by a number when people refer to Mozart's works. The list includes 18 operas, 50 symphonies, and 30 piano concertos. 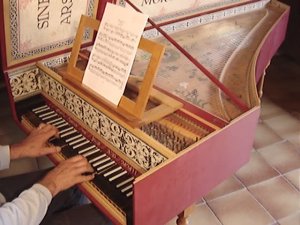 The Harpsichord is a stringed instrument on which the strings are plucked rather than struck. The keys are slimmer than piano keys 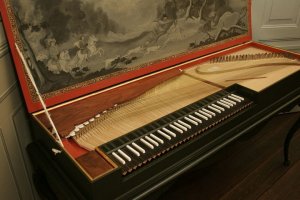 The Clavichord is a stringed keyboard instrument in a box. The strings are struck when the keys are depressed. 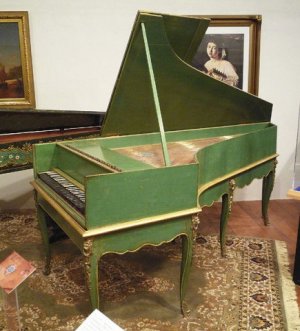 The Pianoforte could be played both soft (piano) and loud (forte). When the keys are depressed, hammers strike the strings.

This biography by Patsy Stevens, a retired teacher, was written March 11, 2011.


The facts in this story were found in the following books:

Empress
Pronunciation: EM-prəs
Function: noun
the wife or widow of an emperor,
also a woman who is the ruler of an empire

precocious
Pronunciation: prih-KO-shəs
Function: adjective
showing the qualities or abilities
of an adult at an unusually early age

concertmeister
Pronunciation: KAHN(T)-sərt-MI-stər
Function: noun
the leader of the first violins
and assistant conductor of an orchestra

Beaumarchais and Mozarat (audio)
Mozart at Eight (audio)
Engines of Our Ingenuity.

Wolfgang Amadeus Mozart
It's Fun to Read at Starfall.com

Listen to the Music of Mozart

Classical Archives
Some are free

Books
Press "Go" to search for books about Mozart.
Library

Mozart
the man and the artist: as revealed in his own words
(published 1905 public domain) free Google eBook

Mozart: Scenes From The Childhood Of The Great Composer
by Catherine Brighton (selected pages)

Mozart: The Boy Who Changed the World with His Music (National Geographic)
by Marcus Weeks (selected pages)