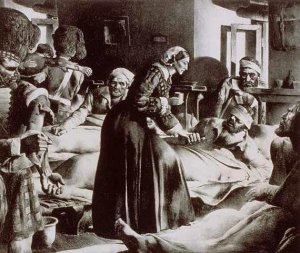 Florence Nightingale was the daughter of a well-to-do family in England. They wanted her to become a socialite* ; to learn to give big parties and serve tea. Florence, however, had other plans. When she told them she didn't want this kind of life, her parents became very angry and her sister went into hysterics.*

By the time she was 12, she was determined to "do something worthwhile". She liked books. She enjoyed caring for sick farmers on her father's estate. Once she even saved the life of an old shepherd's dog that had broken its leg.

At the age of 16, she was sure that God was calling her to serve others. She used every spare minute to learn from nursing books she had secretly obtained. She visited hospitals in London and the surrounding area.

Her parents didn't want her working in those "dirty" hospitals, but she was determined. They did many things to try to change her mind. Her sister pretended to have fainting spells. Her mother accused her of being immoral.*

She finally reached an agreement with her father. If he would let her go to Kaiserwerth (KI zer wirth) hospital in Germany to study, she wouldn't tell anyone her plans. This way, her family wouldn't have to be "embarrassed"* by her actions.

She was an excellent student, and after her graduation, she returned to London and got a job running a hospital.

During the Crimean (cry ME un) War, she was put in charge of nursing. She went to the battlefield with 38 nurses. The hospital was a huge, dirty barracks* building. She got men to clean it up and managed to get the supplies they needed. 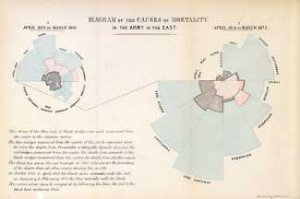 Nightingale diagram showing
causes of death in the war

She carried a lamp as she walked the halls of the battlefield hospital and became known as the "lady with the lamp".

She saved thousands of lives. People called her a ministering angel in the hospitals, but she herself became ill with a disease she got there.

In her later years she was not able to travel, but people came to her from all over the world for her advice.

During the Civil War, the United States asked her advice about setting up military hospitals.

She became known as the founder* of modern nursing.

embarrassed, embarrass
Pronunciation: im-'bar-əs
Function: verb
1 : to cause to feel confused or distressed...

barracks
Pronunciation: 'bar-əks, -iks
Function: noun singular or plural
: a building or group of buildings in which soldiers live

founder
Pronunciation: 'faun-dər
Function: noun
: one that founds or establishes...

Florence Nightingale, The Lady With the Lamp

The Lady With the Lamp
from BBC

NOTES ON NURSING What it is, and what it is not
by Florence Nightingale

Invention of the Hospital(audio) and Nightingale's Graph (audio)
Engines of Our Ingenuity.


Credits and Solutions
Pictures courtesy of Wikimedia Commons, and Corbis.com.