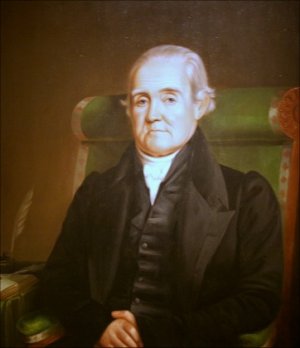 Noah Webster was born in Connecticut. He was a descendant of John Webster, who had been the state governor in the mid-1600's. He lived during the time of George Washington. He attended law school for a while, then he went home and found his family needed help. He took a job teaching school to earn money to support them.

The school was in a shack and as the teacher, he had to do everything. He had to clean and repair the building as well as teach. But he wanted to set a good example for his students, so he did every task cheerfully. He was a good teacher. Instead of flogging* his students to get them to learn, he rewarded them.

Later when he was a schoolmaster in Hartford, he lived with a judge who had a large library. He was able to study law using the judge's books. He became a lawyer, but what he really wanted to do was to teach others.

He decided to write a spelling book and a grammar book. More than 100 million copies of the spelling book were sold. It became known as the Blue-backed Speller.

He rode by horseback and in stagecoaches from town to town in the original 13 states showing people his books. He called them "American books for American children". He would get important people to say good things about his books, then he would show these letters to schools and give them sample copies of the books. The schools usually ordered hundreds of the books for their students.

He had observed that the people in America spoke many languages and they could not understand each other. They would get into fights because of these misunderstandings.*

He thought there needed to be one language;
a "mother tongue",* so that people could work together and be united. He made a dictionary for the people.

He changed some of the spellings of words. He changed words such as "musick" to "music", "centre" to "center",
and "plough" to "plow". He wanted to change "tongue" to "tung" and "women" to "wimmen", but people didn't want to make the changes, so he kept the old spellings of those words.

He changed the way people pronounced "tion". The word "salvation" had been pronounced "sal VA she un" and he said it was alright to say "sal VA shun". 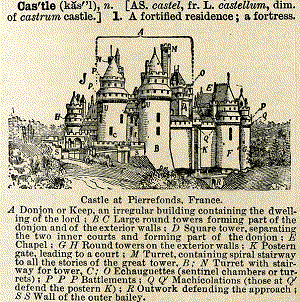 A page from Webster's dictionary 1900

When he started working on his dictionary, he wanted it to be accurate.* He wanted everything in it to be right. He spent more than 20 years and thousands of dollars researching the origins* of words. He wanted to know where the words first started and how we came to be using them. He looked in libraries in England, France and the United States.

He did all the work himself.

When the dictionary was finished, it had 70,000 English words in it. He called it "An American Dictionary of the English Language". It has sold more copies than any English book except the Bible.

Webster in addition to creating a dictionary helped to create an American nation.

Other Activities
View a slideshow about Noah Webster

flogging, flog
Pronunciation: flahg
Function: verb
: to beat severely with or as if with a rod or whip ...

accurate
Pronunciation: 'ak-yə-rət
Function: adjective
1 : free from mistakes especially as the result of care
2 : agreeing exactly with truth or a standard, correct...

origins, origin
Pronunciation: 'or-ə-jən
Function: noun
... a : a rising, beginning, or coming from a source
b : basic source or cause...

The Hornbook and Its Use in America