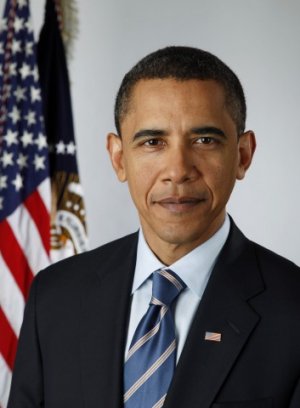 Barack Obama was born August 4, 1961. His parents were both students at the University of Hawaii. He is biracial. His father, Barack Obama Sr., was a black man from Kenya, and his mother Ann Dunham, a white woman, had grown up in Kansas. Barack's grandfather had been a soldier in the army in World War 2.

His parents separated when he was two years old and his father returned to Kenya. After the divorce his mother remarried, this time to a student from Indonesia, and the family moved to Jakarta where Barack was enrolled in an Indonesian school.

When he was ten years old he went to live with his grandparents (his mother's parents) who had moved to Hawaii. While attending school in Hawaii he was one of only three black students in the school.

He only had contact with his father on one occasion after that, and then for only a month. His father died in a car accident in 1982.

After graduating from high school he attended college in Los Angeles and then graduated from Columbia University in New York.

In Chicago he worked with low-income families and housing development.

Next he attended law school at Harvard and became a civil rights lawyer. He also taught at the University of Chicago Law School.

In 1992 he married Michelle Robinson, a young woman who had been his adviser when he started working at the Chicago law firm. Six years later their first daughter Malia Ann was born. Three years after that they had a second daughter, Natasha whom they call "Sasha".

Young children have not lived in the White House in over 25 years. Amy Carter was nine years old when her father, Jimmy Carter became President. 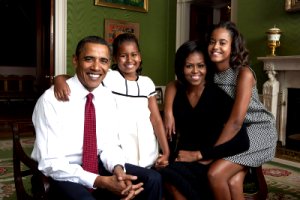 Barack's mother Ann died of cancer in 1994 at the age of fifty-two.

In 2004, the year John Kerry was nominated to run for President on the Democratic ticket, Obama gave the keynote speech at the Democratic convention. He gave a very impressive speech, and people at that time took note of his leadership ability.

In 2007 he announced he would run for the Democratic nomination for President of the United States. Hillary Clinton also wanted to be the Democratic nominee. After months of campaigning Obama won the nomination. Then he and John McCain, the Republican candidate, campaigned tirelessly for months. On election day November 4, 2008 an early victory was achieved and Barack Obama became the first African American to ever be elected to the highest office in the land, the presidency. It was a truly historical event in the country. 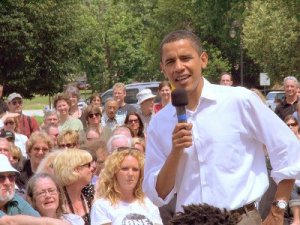 Unfortunately his beloved grandmother, Madelyn Dunham did not live to see her grandson elected. She died on November 3rd, the day before the election.

After the election people began naming their newborns after Barack and Michelle. The story of Barack Obama has only begun to be written. The nation and the world watch as he starts to accomplish the goals he has set for the betterment of Americans.

civil rights
Function: plural noun
the nonpolitical rights of a citizen; especially : the rights of personal liberty
guaranteed to U.S. citizens by the 13th and 14th amendments
to the Constitution and by acts of Congress

nominate
Pronunciation: NAHM ə nAt
Function: verb
to choose as a candidate for election, appointment, or honor;
especially : to propose for office as nominated a senator for president

Democratic
Pronunciation: dem ə KRAT ik
Function: noun
of or relating to a major U.S. political party associated with policies of helping the common people
and encouraging cooperation between nations

Printable Book About Barack Obama
by subscription at Enchanted Learning

Barack Obama, Out of Many, One (Step Into Reading)
by Shana Corey (selected pages) Order here

Barack Obama: a Leader in a Time of Change
by Karen Sirvaitis (selected pages) Order here

Our Country's Presidents: All You Need to Know about the Presidents
by Ann Bausum, Barack Obama (selected pages)


Credits and Solutions
Photographs of Obama at Wikipedia

Drawing of Barack Obama Heroes for a Better World