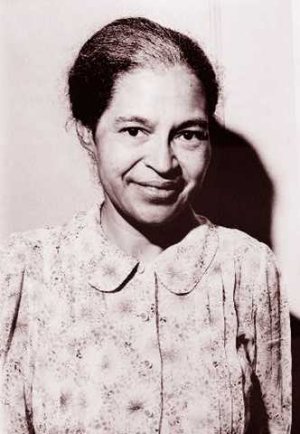 When Rosa Parks was born, she was named Rosa Louise by her parents. Her father was a carpenter and her mother was a teacher. Her parents separated when she was two years old, and she with her mother and brother moved to her grandparents' farm.

Her mother, Leona, homeschooled her until she was eleven, then she attended a private school; the Montgomery Industrial School for Girls. Her training there helped to shape her views which would guide her later in life.

During this time in America blacks did not enjoy the rights they have today. Rosa remembered living in fear when she was a child as a result of the insults and prejudices against people of her race.

She attended college, but had to drop out to care for her grandmother who became ill. Later she cared for her mother. She married Raymond Parks, who was a barber. They were active in the National Association for the Advancement of Colored People, the NAACP (pronounced "N double A C P").

Rosa worked as a seamstress.* It was very tiring sitting at a sewing machine and sewing all day. To get to work she rode the bus.

Black people could not sit just anywhere they wanted in the bus. They had to sit in the back of the bus. If white people were already sitting in the front of the bus, the black person had to pay the fare, get off the bus, and reenter at the back door. Sometimes the bus driver just drove off and left them before they could get back on at the back door. If the bus filled up with people, the driver would ask a black person to move so he could reposition the movable sign which divided the black and white sections.

On December 1, 1955 after a hard day at work, Rosa was riding the bus home when the driver asked her and three black men to move to make more room in the white section. The three men moved, but Rosa refused. A police officer came, arrested her and took her to jail. She was bailed out that evening.

She didn't plan the incident, but when it happened, she decided to stand up for her rights. She was tired of being humiliated* and treated unfairly. She was not the first black person to refuse to move on a bus, but when the event happened to her, civil rights* leaders knew they had found someone to champion their cause. Rosa was a person who was above reproach, and people could not find fault with her character.

A group was formed and 35,000 handbills were distributed calling for a boycott* of the buses. This meant the blacks would refuse to ride the buses unless they were desegregated and they could sit anywhere in the bus. And refuse they did! For more than a year, 381 days, they boycotted the buses. They carpooled, rode in cabs, and walked to work.

There was a lot of violence and bombings. Martin Luther King rose as a leader during this time and his house was bombed. Black churches were destroyed.

On November 13, 1956 the United States Supreme Court ruled that segregation* was unlawful, and the city of Montgomery, Alabama had no right to impose it on people riding their buses. The next month the signs on the bus seats designating white and colored sections were removed. The boycott was over. 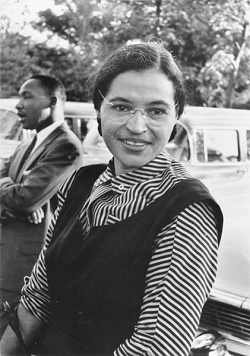 Rosa lost her job and was unable to get another one in Montgomery. She and Raymond moved to Virginia.

During her lifetime she was awarded many honors for her courageous stand. There was the Rosa Parks Peace Prize in 1994, the Presidential Medal of Freedom in 1996, and the Congressional Gold Medal in 1999. A library and museum is dedicated to her in Montgomery, Alabama.

Rosa Parks passed away on October 24, 2005 at the age of 92. Her casket was placed in the rotunda* of the United States Capitol for two days. This is an honor usually only reserved for Presidents when they die. People waited in line for pay their respects.

Today people of all color can sit wherever they wish on buses throughout the nation due to the courage and determination of one woman, Rosa Parks.

seamstress
Pronunciation: 'sEm(p)-strəs
Function: noun
a woman who sews especially for a living

humiliate
Pronunciation: hyoo'mil-E-'At, yoo-
Function: verb
to cause a loss of pride or self-respect : to humble
- hu mil i a tion /-"mil-E-'A-shən/ noun
Word History: In modern English we sometimes say that a person who has been
criticized or humiliated has been put down. We speak as though the person
had actually been forced to the ground or made to bow down in front of
someone else. The origins of the word humiliate itself also suggest the idea
of physically putting someone down to the ground.

civil rights
Function: noun plural
the nonpolitical rights of a citizen; especially : the rights of personal
liberty guaranteed to U.S. citizens by the 13th and 14th amendments
to the Constitution and by acts of Congress

boycott
Pronunciation: 'boi-'kaht
Function: verb
refusing to do business with someone or to buy a certain product.
(Look up the word at Word Central to find out how the term came to be called "boycott".)

segregation
Pronunciation: 'seg-ri-'gA-shən
Function: noun
1 : the act or process of segregating : the state of being segregated
2 : the separation or isolation of a race, class, or group
(as by restriction to an area or by separate schools)

rotunda
Pronunciation: rO-'tən-də
Function: noun
1 : a round building; especially : one covered by a dome
2 a : a large round room b : a large central area (as in a hotel)

Research Links
Rosa Parks
from the Academy of Achievement

Rosa Parks Lesson Plan
Lesson Snips.com
(You must register to use, a limited number of lessons free)

Rosa and Raymond Parks
Institute for Self Development

At biography.com search for Rosa Parks Jailed.
Scroll the panel for the "Video & Audio Results".

Rosa Parks: The Courage to Make a Difference
by Sneed B. Collard (selected pages) Order here

People We Should Know - Rosa Parks
by Jonatha A. Brown (selected pages)