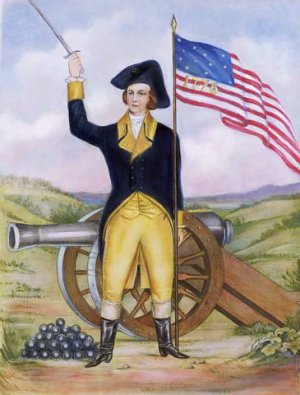 Deborah Sampson's family was very poor. She was the oldest of six children. Her father deserted his family and went to sea on a ship. When her mother could no longer feed her family, she sent them to live with friends and relatives.

Eventually, at the age of 8 to 10 years old, she became an indentured* servant. She worked on a farm and worked very hard. She learned to sew and spin. She could hunt, ride a horse, and even do carpenter work. She loved to learn and would get the boys in the family to teach her the lessons they were learning in school. She learned so well that she later became a teacher.

During the Revolutionary War she wanted to help, but they did not allow girls to join the army. She decided she could join the army if she pretended to be a man. She practiced walking and talking like a man until she could even fool her mother. She was ready. She became an enlisted* "man" using the name Robert Shurtleff.

She was tall for a woman; 5 foot and 7 inches, so her fellow soldiers thought she was a short man. They teased "Robert" because he didn't have to shave, but they just thought this "boy" was too young to grow a beard.

"Robert" was a good, brave soldier and volunteered* for some dangerous jobs. The other soldiers were proud of him. Deborah became the aide,* or personal helper of the general. She served him his meals and took care of his clothes for him.

Things were going well until she was wounded in battle. She let the doctor treat the wound on her head, but she removed the bullet from her leg by herself with a penknife and a needle. Her leg never did heal properly, but her secret was still safe. She was afraid if they found out she was a girl, they would shoot her.

Later she developed a fever and was put in the hospital. The doctor discovered that "Robert" was actually a woman. He took her to his family's home to get well. She was given an honorable discharge* from the army.

After she left the army, she married a farmer named Benjamin Gannett and they had three children. She taught at a school and also would give talks or lectures about her experiences in the war. At the end of her lectures, she would leave the stage and then come back onstage dressed in her uniform and go through the soldier's routine with the gun.

Paul Revere wrote a letter to Congress asking for her to be given a pension.* She began receiving four dollars a month.

She died at the age of sixty-six.

indenture
Pronunciation: in-'den-chər
Function: noun 1 : a written agreement :
2 : a contract by which one person is made to work for another for a stated period


enlisted
Pronunciation: in-'lis-təd
Function: adjective
: of, relating to, or forming the part of a military or naval force in the ranks below commissioned or warrant officers

aide
Pronunciation: 'Ad
Function: noun
: a person who acts as an assistant

Amazing Women in War and Peace

The Life of Deborah Sampson,
choose the media you wish to view

Portrait of Deborah - A Drama in Three Acts
by Charles Emery (selected pages)
This book is currently unavailable at bookstores.