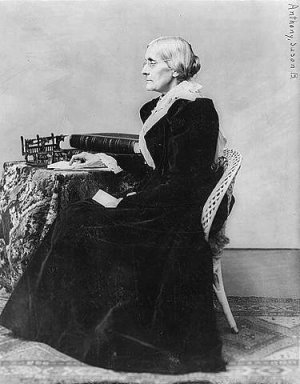 Susan B. Anthony was America's foremost advocate for women's rights. Her story is an inspiration to women of today, the beneficiaries* of the struggles she and many other women endured in the 1800's.

It began in 1820 when she was born into a Quaker family in Massachusetts. The family was opposed to slavery, and her father avoided purchasing cotton for his mill which had been raised by slave labor.

Her father started a school for his children and hired a young woman, Mary Perkins, to teach them.

When Susan was fifteen years old the family moved into a new fifteen-room brick home, the finest in the community. Life was good for them. Two year's later Susan and her sister became teachers earning $1.50 a week plus board.

When she was seventeen she left home to join her sister Guelma where they attended a school in Philadelphia. They had to leave school when their father lost his business and their fine home in an economic downturn.

She continued teaching to help the family. At one time she replaced a man teacher and was very upset when she discovered she was only being paid one-fourth the salary of her male predecessor.*

In 1845 she moved with her parents to a farm near Rochester, New York. They transported their horse, wagon, and household goods by boat down the Erie Canal.

She received an offer to teach at the Canajoharie Academy where she made new friends who were not Quakers. Discarding the somber clothing and restrictions on music and dancing, she began to enjoy a social life.

She joined the temperance* movement which sought to prohibit the production of alcohol and its consumption. At one meeting she spoke to a group of 200 men and women regarding the evils of alcohol.

She also became interested in the Women's Rights movement. At that time women could not own property or vote.

She contacted Frederick Douglass to find out first-hand the needs of his people. Douglass and his family attended anti-slavery meetings at her father's farm.

As she became more active in the temperance movement the Daughters of Temperance in Rochester elected Susan their president.

Some ladies in the women's movement began to wear "bloomer"* costumes. They wore long full bloomer pants under their dresses. They enjoyed the freedom of movement the clothing gave them, but Susan wasn't quite ready for that.

She finally relented,* cut her hair, and put on the bloomers in support of the movement. 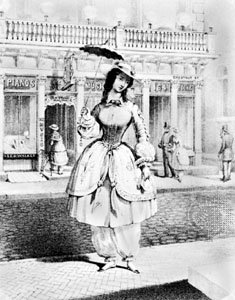 She developed a friendship with Elizabeth Stanton and Lucy Stone. This friendship would develop into the woman's rights movement in America.

Once when Susan spoke out at a temperance meeting, the leader informed her that women had been invited to the meeting "to listen and learn, not to speak". She and several other ladies left the meeting indignantly. The story was published in the newspapers, and the women began holding meetings of their own.

One winter a wealthy Quaker man started taking her to meetings in his own sleigh, providing warmth for her, and taking care of her. He wanted Susan to marry him, but she would have to give up her crusade to do it, and she was unwilling to do so.

Susan was instrumental in the passage of the Married Women's Property Bill in New York which stated that a woman had the right to hold property, carry on a trade, and collect and use her own earnings. It also provided joint guardianship of the children with her husband. This protected her right to raise her children if her husband were to die.

Her father's death in 1862 was devastating to her. For weeks she felt nothing but grief.

She started petitions to outlaw slavery. Over time she obtained 400,000 signatures. In April 1864 the Thirteenth Amendment which abolished slavery passed the Senate.

When the Fourteenth Amendment was passed guaranteeing equal protection under the law, Susan was dismayed by the wording in Section 2 defining voters as "male citizens". There was still more work for her to do; women had been left out. She regarded the amendment as "utterly inadequate".

She began to circulate woman suffrage* petitions in New York. Suffrage is "the civil right to vote or the exercise of that right". Women in America did not have that right.

With some financial help from George Francis Train she started a newspaper The Revolution to promote woman suffrage. The publication not only sought to promote the vote for women but to establish justice for all who were oppressed. When Train was no longer able to financially support the paper, she struggled to keep it in production.

She voted in the election in which Ulysses S. Grant was elected president, and two weeks later a deputy marshal was sent to arrest her. When they asked for her fare on the street car, she embarrassed the marshal by loudly announcing, "I'm traveling at the expense of the government. This gentleman is escorting me to jail. Ask him for my fare." 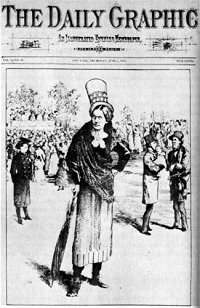 The other women who had voted were also arrested. At Susan's trial the jury, of course, was all male. The judge refused to let her testify on her own behalf. Judge Henry Selden, the lawyer she had retained to defend her, presented her case. The judge himself declared her guilty and deprived her of a trial by jury.

Later on when the judge said, "Does the prisoner have anything to say?", she surely did. Susan talked on and on in spite of the judge's attempts to quiet her. He finally fined her $100.

Susan continued to fight for the right of women to vote. She groomed younger women to take her place; the "girls" she called them.

She longed to see women voting throughout the world, but when she died in 1906, just one month after her 86th birthday, this dream had only been realized in Wyoming, Utah, Colorado and Idaho, and far away in New Zealand and Australia.

In 1979 in her honor the U.S. Mint officially released the Susan B. Anthony dollar coin. Over 1 billion of the coins were minted

Many of the facts in this story were taken from the book Susan B. Anthony, Rebel, Crusader, Humanitarian online book by Alma Lutzs ( You may want to "View - Text size" and enlarge the print twice.)
Take the online test

predecessor
Pronunciation: 'pred-ə-'ses-ər, 'prEd-
Function: noun
one that precedes; especially : a person who has held a position or office before another

temperance
Pronunciation: 'tem-p(ə-)rən(t)s, -pərn(t)s
Function: noun
1 : control over one's acts, thoughts, or feelings : MODERATION, RESTRAINT
2 : the use of little or no alcoholic drink

suffrage
Pronunciation: 'səf-rij
Function: noun
the right of voting; also : the exercise of such right

beneficiary
Pronunciation: ben-ə-'fish-E-er-E, -'fish-(ə-)rE
Function: noun
a person who benefits or is expected to benefit from something

Susan B. Anthony, Celebrating a Heroic Life
University of Rochester

Susan B. Anthony
biography from Spartacus.schoolnet.co

Speech by Susan B. Anthony
On Women's Right to Vote

Susan B. Anthony
from biography.com

The Trial of Susan B. Anthony

Books
Press "Go" to search for books about Susan B. Anthony.
Library

The History of Woman Suffrage
(public domain 1922, full view)
(the "+" in the magnifying glass will enlarge the print)

Fighting for Equal Rights, A Story About Susan B. Anthony
by Maryann N. Weidt (selected pages)

Susan B. Anthony and the Women's Movement
by Terri DeGezelle (selected pages)

Susan B. Anthony, A Life of Fairness
by Jennifer Boothroyd (selected pages)