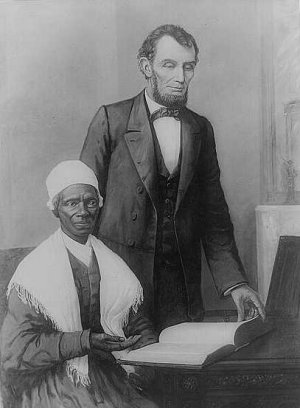 Sojourner Truth, whose name was originally Isabella, was the daughter of slaves in the state of New York. Their master, Charles Ardinburgh, gave them a small plot of land where they raised meager* crops.

The slaves all slept in one room, a damp cellar under the master's house. Men, women, and children slept on boards covered with straw. They were treated no differently than the animals on the farm.

During the Civil War she enlisted black troops in the cause of freeing the slaves.

She visited President Lincoln. On this page appears a painting in which the President is showing her a Bible given to him by slaves.

Her parents had ten or twelve children, but many of them had been sold before Isabella was born. She was the youngest child in the family, and she never knew many of her siblings.

Her mother, whom they called Mau-mau Bett, taught her about God and instilled a faith and trust which would grow as the years passed. She taught her children to pray and to be good and honest.

One day an auction* was held and the "slaves, horses, and other cattle" of their deceased master was to be sold. Isabella was sold for $100 to John Nealy. She was nine years old. She spoke Dutch, the Ardinburgh's native tongue, and the Nealy's spoke English. Her mistress became angry when Isabel wouldn't obey (because she didn't understand the commands).

One day the master cruelly beat her. She prayed to God to let her father come to visit her. When her father came, she told him of the beatings, and not long afterward a fisherman named Scriver bought her from Nealy for $105. After about a year and a half, she was sold again to a Mr. Dumont. This was shortly before the state emancipated* the slaves in 1828.

Isabella was married to a fellow-slave named Thomas. His two previous wives had been sold. Isabella and Thomas had five children.

This master treated her kindly. If he entered a room and "Bell's" child was crying because her mother was busy working for her mistress, Dumont would say, "Here Bell, take care of this child, if no more work is done for a week." Then he would stay awhile to make sure his wife allowed her to care for her baby.

When she worked in the field, she would put her baby in a basket suspended from a tree by ropes. Then she would have another child swing the basket. The baby was safe, and the child was occupied with something to do.

Her master promised to give her freedom, but he went back on his word and refused to let her go. She decided she would spin his wool, then she would just leave. And so she did. Before dawn one morning she took her baby in one arm and her clothing in a bundle on the other. She went to the home of a man named Levi Rowe, and he directed her to Mr. and Mrs. Van Wagener.

The Wagener's took her in and gave her employment. Her master, Dumont, found her shortly thereafter and accused her of running away. She said, "No, I did not run away. I walked away by daylight". When she refused to go with him, he threatened to take her child. Mr. Van Wagener, who believed slavery was wrong, agreed to pay Dumont $20 for the year's work and $5 for the child. Dumont accepted and left.

Isabella's 5 year old son was sold. She didn't know about it until he had already been sent out of the state. She was livid. She said, "I must have my child!", but Mrs. Gedney, the master's wife, was unsympathetic. A kind man directed Isabella to a Quaker family who let her spend the night with them. She slept in a bed for the first time.

The next day they took her to the Court House where she appeared before the Grand Jury. Gedney was served a paper stating he had to return the boy or face a fine and imprisonment. She got a lawyer and paid him to get her son back. The judge awarded her the boy, and only then did she learn the cruel treatment he had endured.

Isabella's father, Bomefree, was old and none of the master's family wanted to be responsible for him, so they gave Mau-mau Bett her freedom if she would care for him. They were able to remain in the cellar where they had been living, but would have to support themselves.

When Isabella's mother died, there was no one to care for Bomefree, her father. The Ardinburgh's took turns caring for him and finally arranged for two other slaves to care for the old man. Isabella herself had been sold and could not care for her father. Bomefree, after the death of his caretakers, was deserted and died alone in a shanty.

Isabella had a special place where she prayed daily. It was a little island in the middle of a small stream in an idyllic* setting. She promised God if He would give her better circumstances, she would be good. Her life did get better-- then she forgot God.

One day she had a religious experience that changed her life. She said she saw Jesus and knew he was her friend who could reconcile her to God.

She moved to New York City where her grown son began to get into trouble. He finally left the city and went to sea.

On more than one occasion conductors refused to let her ride the streetcars and abused her. The first time it happened she was dragged by the streetcar. She filed a complaint and the conductor was dismissed.

While in New York Isabella met the family of James Latourette, a wealthy merchant. She worked for them, and they cared for her as one of their own.

When she decided to leave New York she changed her name to Sojourner and said she was going east. When questioned as to why she was leaving she replied, "The Spirit calls me there, and I must go." She wanted to lecture "testifying to the hope that was in her" and exhorting people to embrace Jesus and refrain from sin.

Sojourner could not read, so she would ask others to read the Bible, books, and newspapers to her. She especially liked for children to read to her because they would just read the words on the page and not editorialize.* If she asked an adult to reread a passage, that person would want to tell her his/her interpretation of the words. She wanted to decide for herself the meaning of the words.

Her grandson described her as "tall, thin, and angular* with a deep voice". He said she possessed a keen mind and ready wit and when addressing an audience extended "a long bony forefinger to emphasize her points". She was about six feet tall and wore Quaker-like clothing, and always had a turban on her head.

In December 1851 Sojourner delivered an address at the Women's Convention in Akron, Ohio which has become famous. It is known as the "Ain't I a Woman?" speech. Read an account of the speech, and the original version including the dialect. 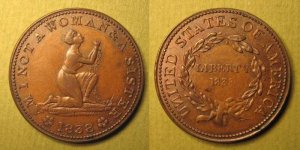 "Am I not a Woman & a Sister" token dated 1838, courtesy of my son, Elton. The token was issued by the Abolishionist Movement to promote the cause. Sojourner with her dialect changed the question to "Ain't I a Woman".

After her death she received many honors; a highway was named for her in Michigan, a monument was built to honor her in Battle Creek, Michigan, a commemorative stamp was published by the U.S. Post Office in 1986, and a year later the NASA Mars probe Sojourner was named in her honor. 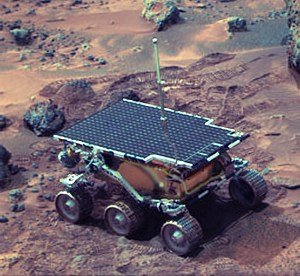 Many of the facts in this story were taken from the Narrative of Sojourner Truth written by Olive Gilbert in 1850.
Take the online test

meager
Pronunciation: 'mE-gərM
Function: adjective
falling short of what is normal, necessary or desirable
a lack of fullness, richness, or plenty

angular
Pronunciation: 'a[ng]-gyə-lər
Function: adjective
being lean and bony as an angular face

auction
Pronunciation: 'ok-shən
Function: noun
a sale at which things are sold to those who offer to pay the most

emancipate
Pronunciation: i-'man(t)-sə-"pAt
Function: verb
to free from someone else's control or power;
especially : to free from slavery

Sojourner's Speech
"Ain't I a Woman?

People of Faith - Sojourner Truth
from This Far By Faith

Women Who Left Their Stamps on History
Sojourner Truth 1986

Abolition of Slavery
video lesson
(Click on the topics "Interactive Media Files", be sure volume is turned up.)

A Picture Book of Sojourner Truth
by David A. Adler (selected pages)