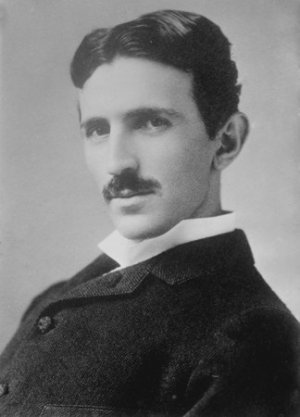 Nikola Tesla was one of the foremost inventors of our time, but he was discredited during his lifetime, and probably has not received the recognition which rightfully belongs to him. He was born in the region which is now Croatia and descended from a family of inventors. As he was growing up he watched his mother invent things to make her work easier.

From the time he was a boy he had an ability to "see" things that would come into his mind. He said they were not hallucinations,* and it was hard for him to distinguish between an actual object and an object his mind produced. Sometimes the images were accompanied by flashes of light and were so vivid and so real he could manipulate them to the extent that he could make an invention and refine and change it before he ever put it down on paper. He had an extraordinary gift!

Some of his first attempts at experimenting were not successful. He took apart his grandfather's clocks, but was unable to reassemble them. Needless to say, his grandfather put a stop to that.

As a young man he was fascinated with Niagara Falls. In his mind he saw a vision of a giant wheel with the water spilling over it. Thirty years later in America his ideas were carried out in the harnessing of the power of Niagara Falls.

Tesla had several close calls with death. Once in a swimming incident he almost drowned, but was able to visualize a way of escape. Then there was a second swimming incident and bouts with malaria and cholera. During one of these times of crisis he said to his father, "Perhaps, I may get well if you will let me study engineering." His father replied, "You will go to the best technical institution in the world." After his recovery his father sent him to an excellent polytechnic school in Austria where he excelled by beginning each day of study at 3:00 in the morning and working until 11:00 at night. He never took a day off. He later learned the professors had written to his father to remove him from the school for fear he would overwork himself.

In fact Tesla did suffer a nervous breakdown.* The acute sensations of sight and hearing he had experienced as a boy were greatly magnified during this time.

Once in a flash of inspiration he had a vision of a motor and drew it with a stick in the sand. Six years later he presented the very same thing to the American Institute of Electrical Engineers.

He had a succession of ideas and in a period of two months he had envisioned* all the inventions which are now identified with his name.

In New York he started to work for Edison. For a year he worked a shift from 10:30 A.M. one day to 5:00 A.M. the next day. The manager had promised him $50,000 when the job was completed, but Tesla found out the offer was a practical joke and he quit.

In 1885 he formed the Tesla Arc and Light Company and developed the motors he had pictured in his mind.

Telsa was a man ahead of his time proposing wireless communication years before it was developed. He imagined a time when "an inexpensive receiver, not bigger than a watch, will enable (people) to listen anywhere, on land or sea, to a speech delivered or music played in some other place, however distant". He foresaw the development of guided missiles and weapons of mass destruction.

A financier,* J.P. Morgan, offered Tesla $150,000 to build a transmission plant, so the tower was started in 1901 on Long Island, New York at a place he called Wardenclyffe. The tower was 186 feet high and another 150 feet of it was buried under the ground. It had a hugh steel sphere on top. Then Morgan withdrew his support and construction stopped. Tesla performed some amazing electrical experiments with it. Once he created a lightning bolt that shot 120 feet in the air above the antenna. It started fires at the power company and they shut off power to him. The dome was eventually destroyed.

Tesla thought people should be able to live in peace with one another, and he designed inventions to be used for peaceful purposes. He thought technology could be used to stop wars, but most of his ideas were rejected at the time, and peace is just as elusive today as it was then.

Edison and Tesla were at odds over the best way to conduct electricity. Edison's transmission depended on direct current* (DC) and Tesla proposed alternate current (AC). The conflict was deep and the animosity was so great it probably prevented them from receiving the Nobel Prize in 1915.

Had Tesla been a better businessman he would have become very wealthy, but he let people take advantage of him. He claims Marconi stole his idea in the development of the wireless telegraph. At one point he signed over 51% of his company to Westinghouse and lost control of it.

Tesla's dream was to provide free electricity for the world, but the financiers didn't want him to be able to provide something they couldn't put a meter on and charge for.

These are a few of the discoveries and inventions attributed to Nikola Tesla:

Rotating Magnetic Field Magnetic Resonance Imaging machines (MRI) work on this principal. The unit of measurement telling the strength of the magnetic field is called the Tesla. (T)

Tesla Coil This Tesla invention produces powerful electrical fields. He was able to produce up to 100 million volts of electricity.

Electro-Magnetic* Motors, Alternating Current His motor was based on the principal of a rotating magnetic field.

Converting energy (click on "Tesla for Teachers") The implementation of his early vision changed water energy into electrical energy and served as the pattern for hydroelectric plants today.

Radio : The invention of the radio is attributed to Marconi, but after Tesla's death a Supreme Court decision awarded it to Tesla.

He thought the gift of mental power came from God. As a result of his great mental prowess* he was able during his lifetime to create the things he envisioned and obtain 700 patents in 25 countries.

Tesla died alone in a New York hotel at the age of 86. He was destitute and in debt. After his death the FBI came in and took his notes and possessions. The government labeled some of his work "top secret" because of his work developing a death ray. His family eventually had some of the items returned to them and they donated them to the Nikola Tesla Museum in Belgrade, Serbia. You may enjoy looking at some 3-D Models of some of the inventions of this extraordinary man.

hallucination
hə-loos-ə-NA-shən
Function: noun
the awareness of something (as a visual image, a sound, or a smell) that seems to be experienced through one of the senses but is not real, cannot be sensed by someone else, and is usually the result of mental disorder or the effect of a drug;
also : something of which one is aware but which is not real

nervous breakdown
Function: noun
an attack of mental or emotional disorder that is severe enough to require hospitalization

envision
in-'vizh-ən
Function: verb
to picture to oneself as in "She envisions herself as a doctor".

financier
fin-ən-'sih(ə)r
Function: noun
a person who specializes in finance and especially in the financing of businesses

electromagnet
ih-lek-tro-'mag-nət
Function: noun
a core of magnetic material (as soft iron) surrounded by a coil of wire through which an electric current is passed to magnetize the core

Excerpts from "My Inventions" at Wikipedia

Tesla: Man Out of Time
by Margaret Cheney (selected pages)