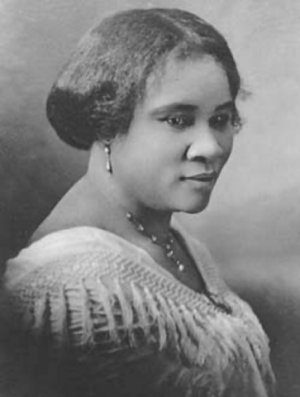 In 1917 Madam C.J. Walker was one of the wealthiest women in the United States. She developed a line of cosmetics and hair products especially for African-American women. She trained many women to become sales representatives. She once told a group of women,

"There is no royal flower-strewn road to success, and if there is, I have not found it, for what success I have obtained is the result of many sleepless nights and real hard work."

She had worked hard all her life, beginning in the cotton fields and later as a washerwoman when she was young.

It was a popular notion among black women at that time that shampooing was not good for the hair. When she began to have scalp problems she experimented and developed products to cure her own problem and in doing so started a very lucrative* business which would benefit her and many other African- American women who used the products and went into business for themselves in the "Walker System".

She was born in 1867 and her name was Sarah Breedlove. Her parents were freed slaves and continued at the plantation as sharecroppers.*

Sarah was not able to get an education when she was young because she was working all the time. Tragically when she was eight years old both her parents died of disease and the six children were left to fend for themselves.

Due to prejudice and social unrest blacks were being murdered in their area and the family moved to Vicksburg, Mississippi. Sarah earned money by washing clothes. They did not have washing machines in those days. They just had big wooden tubs filled with soapy water and washboards on which they scrubbed the clothes. After scrubbing the clothes they boiled them, lifted them out of the boiling water, and hung them on the line to dry. The wrinkles were removed from the dried clothes with big irons heated on a stove.

When she was 14 she married Moses McWilliams to get away from the situation where she was living with her sister and her mean husband. When she was 17 she had baby girl, Lelia. Then her husband died. What was she to do?

She took her four-year-old daughter and moved to St. Louis where her brothers lived. She received help from many middle-class black women in St. Louis. Her little girl went to school and Sarah began saving money to send her to college.

She married a man named John David, but he was an alcoholic and after nine years she divorced him.

Sarah started selling hair products for the Poro company. Some people think a pharmacist* may have helped her analyze the ingredients and suggested ways to improve the product. She began making her own products and carefully guarded her formula. She advertised in the newspapers and used before and after photos of herself to show how well her hair preparation worked. The "before" pictures showed her hair short, thin, and stubby, and the "after" pictures showed her with a full head of long healthy hair.

She met a man named Charles Joseph Walker (C.J.). They married and she called herself Madam C.J. Walker. One of her most popular products was Madam C.J. Walker's Wonderful Hair Grower. She gave free demonstrations and trained women to sell the hair and beauty products.

The business continued to grow. Sarah and her husband moved to Pittsburgh, Pennsylvania, a good city from which to distribute the packages across the nation. At this time she was annually making the equivalent of $150,000 in today's dollars.

She opened a beauty salon, then a school to train agents to sell the products. She named it Lelia College after her daughter. The graduates received certificates and were called hair culturists.*

The next step was to build a factory to produce large quantities of the hair preparation and other beauty supplies. She tried to get investors. She appealed to Booker T. Washington, but he declined saying he had all he could do at Tuskegee Institute.

She did not get the investors she needed, but they settled in Indianapolis, Indiana and built the factory there. It would eventually employ more than 3000 African-American men and women.

Walker was generous and contributed to causes which benefited African-Americans. She helped Mary McLeod Bethune to establish a school for girls.

Walker expanded her business again by going to the Caribbean and Central America. By 1917 she had trained 20,000 agents. The business was going well, but her marriage wasn't. She and C.J. divorced in 1914.

Booker T. Washington wouldn't have anything to do with Walker. It was probably because he thought she was advocating* straight hair for African-American women which many thought was a white trait. He continued to ignore her until one day at a convention she stood up, introduced herself, and told her story. After that he gained a new respect for her. Eventually they developed a good working relationship.

There were few cars in the early 1900's, but Walker owned two, one driven by a chauffeur and a small electric car she drove herself.

Lelia her daughter opened a luxurious salon in New York. Walker went to live with Lelia and Lelia's adopted daughter Mae. She gave elaborate dinners at the Harlem* townhouse.

She built a 30-room mansion by the Hudson River in an exclusive neighborhood. Enrico Caruso, the famous tenor suggested she name it Villa Lewaro. The word Lewaro was a word made from the first two letters of each of Lelia's name, LElia WAlker RObinson.

Her health began to decline and she died May 25, 1919 of kidney disease. Thousands attended her funeral and honored her for the good she had done for African-Americans and for equal rights.

The facts in this story were found in the book Madam C.J. Walker: Entrepreneur and Millionaire
by Darlene R. Stille (selected pages)
Take the online test

sharecropper
Pronunciation: shaər-krahp-ər
Function: noun
a farmer who works land for the owner in return
for a share of the value of the crop

advocate
Pronunciation: ad'-və-kAt
Function:verb
to speak in favor of : argue for

The Booker T. Washington Era
(scroll to the bottom for pictures of C.J.Walker.)

On Her Own Ground: The Life and Times of Madam C.J. Walker
by Alelia Bundles (selected pages)