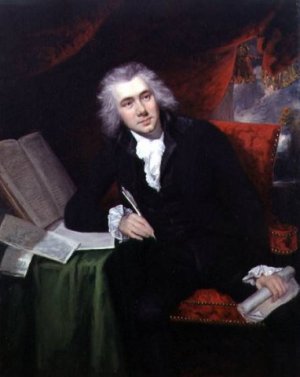 William Wilberforce, born August 24, 1759, was the only son of Robert and Elizabeth Wilberforce of Hull, England. He was a delicate child, not very strong physically. From early childhood he showed compassion for others.

His grandfather was a merchant who imported hemp,* timber, and iron ore and exported many products from Yorkshire. William had three sisters, but one died at age 8 and another at age 14. Only Sarah lived to be an adult.

When William was only 9 years old his father died and he was sent to live with his aunt and uncle, Hannah and William Wilberforce at Wimbledon. He was placed in a private school where he remained for two years. He received early religious training while living with them.

The evangelist John Newton was a good friend of the family. He visited in their home and William and his aunt and uncle also visited in the Newton home. He was a former slave-ship captain, but he forsook the trade and spent the rest of his life working to free the slaves and prevent further enslavement. Newton would conduct "parlor* preaching" in his home for his family and guests. 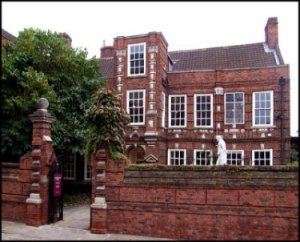 William's mother was a socialite who enjoyed going to parties and the theater. William had been sent to Wimbledon when she became ill. When she was better she sent for him to come home. She was a member of the Church of England and became alarmed at the influence of these "Evangelical* Methodists" on her son. She had other goals for him. She didn't want him to continue having contact with his aunt and uncle and the people he had met while staying with them. However, he continued to write to them without his mother's consent.

After returning home he began to drift away from his faith and by the time he went to St. John's College, Cambridge he embraced a life of partying and excess. He was very entertaining, sang well, and was a brilliant conversationalist. He had a lot of friends. While in college he had dinner parties in his room and invited his friends to come and enjoy food and wine with him. During this time he made contacts with people who, like himself, would become well-known leaders in England. One of the people he met in college was William Pitt who would later become Prime Minister.*

When he was nearly through college his grandfather and his cousin interested him in Parliament. William Pitt was the main impetus for his decision to enter politics. The family fortune made it possible for him to embark on such a career, and the associations he had made in college were helpful to him politically.

He campaigned in his hometown of Hull and received nearly every vote. He was only 21 years old when he was elected to Parliament* for Kingston upon Hull. Three years later he was reelected as a Member of Parliament for Yorkshire. Wilberforce and Pitt remained friends even when William, to satisfy his conscience,* had to vote against his friend.

A turning point in his life came when he made a tour of Europe with Isaac Milner, the younger brother of Joseph Milner who had been the headmaster of the grammar school he attended. They had long talks as they traveled together. William was convinced to devote his life to Jesus Christ and to the cause of the abolition* of slavery in the British colonies.

He began to read the Bible and underwent a spiritual conversion. He regretted the way he had lived his life as a young man. He felt that he had wasted those college years by putting his main focus on partying and playing cards. He determined he would use his public office to bring about social change, mainly the freeing of the slaves.

When William was 37 years old he met Barbara Spooner, a 20 year old woman and fell in love with her. They had the same ideals and shared a common faith. They married after a very short courtship and within 10 years had 6 children. William was devoted to his wife and children.

In the 44 years he served in Parliament he never lost an election, but the cause he espoused,* the abolition of the slave trade, was defeated 11 times before the Slave Trade Act finally passed in 1807. He had worked 20 years and had used his position in Parliament to bring about this change. The first victory the abolitionists had was the abolishment of the slave trade, but this did not make slavery unlawful. It made the shipment of slaves unlawful. This reduced the number of people continuing to be enslaved by about 75%. The bill passed by 283 votes for and 16 votes against.

Many British ships were used to transport slaves. Some people estimate that 11 million Africans were taken from their native lands and sold as slaves to work in the colonies. Rev. James Ramsay told William of the horrible conditions on the slave ships. Read about the slave ship Brooks 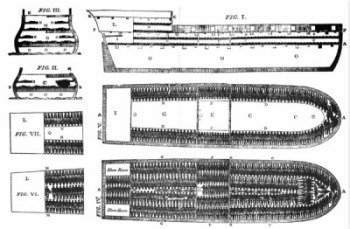 These iron quoits, as seen in the picture were made for the purpose of bartering them for slaves on the African coast. Quoits are used in a game similar to the game of pitching horseshoes. Such artifacts can be seen at the Wilberforce House Museum. 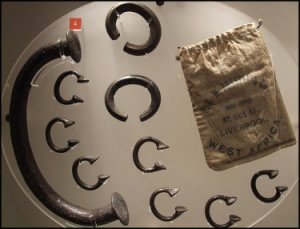 William Wilberforce also worked for justice in other areas such as prison reform, workers' rights, prevention of cruelty to animals, and education. We learn much about him from journals he kept and letters he wrote to people. 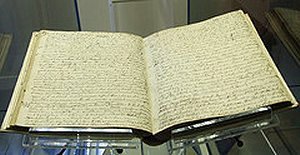 In 2007 a film Amazing Grace was produced. That year marked 200 years since the bill of 1807 had been passed. After the Slave Trade Act was passed, thousands of slaves were rescued from ships where they had been imprisoned. The movie tells of the life and effort of William Wilberforce and other notables who were instrumental in abolishing slavery.

Even though laws have been passed outlawing slavery, it still exists in some parts of the world today. Children are kidnapped by slave traders or, in some cases, sold by their poverty-stricken parents for as little as $15. Some enslaved children work long hours without benefit of schooling or basic necessities of life. Christian Solidarity International is an example of an organization which buys back some of the children and frees them from their owners.

Many of the facts in this story were found in the books William Wilberforce, A Hero for Humanity by Kevin Belmonte and The Life of Wilberforce by his sons Robert Isaac Wilberforce and Samuel Wilberforce
Take the online test

hemp
Pronunciation:hemp
Function: noun
a tall Asian herb widely grown for its tough woody fiber that is used to make rope
and for its flowers and leaves from which are obtained
various drugs that affect the mind or behavior

Evangelical
Pronunciation:e-van-jel'-ih-kəl
Function: adjective
stressing salvation by faith in Jesus, the authority of the Bible,
and the importance of preaching

parlor
Pronunciation:par'lər
Function: noun
a room in a home, hotel, or club used for conversation or the reception of guests

Prime Minister
Function: proper noun
the chief officer of the government in some countries

conscience
Pronunciation: kahn'-chən(t)s
Function: noun
knowledge of right and wrong and a feeling one should do what is right

espouse
Pronunciation: is-pahuz'
Function: verb
to take up the cause of or support

abolish
Pronunciation:ə-bahl'-ish
Function: verb
to do away with completely : put an end to

Research Links
William Wilberforce
at My Learning.com (index to pages in left-hand column)

Audio Clips
made from the writings of Wilberforce

An Essay on the Treatment and Conversion of African Slaves in the British Sugar Colonies
by Rev. James Ramsay (public domain, 1884, full view)
(Note: s's are written as f's in the document)

Thoughts Upon the African Slave Trade by John Newton
from the Samuel J. Jay Anti-Slavery Collection (public domain, full view)
(S's are written as f's in the document)