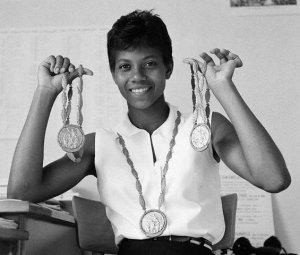 When Wilma Rudolph was four years old, she had a disease called polio* which causes people to be crippled and unable to walk. To make matters worse, her family was poor and could not afford good medical care. She was from a large family. She was the 20th child of 22 children. Her father was a railroad porter* and her mother was a maid.

Her mother decided she would do everything she could to help Wilma to walk again. The doctors had said she would not be able to walk. She took her every week on a long bus trip to a hospital to receive therapy.* It didn't help, but the doctors said she needed to give Wilma a massage* every day by rubbing her legs. She taught the brothers and sisters how to do it, and they also rubbed her legs four times a day.

By the time she was 8, she could walk with a leg brace. After that, she used a high-topped shoe to support her foot. She played basketball with her brothers every day.

Three years later, her mother came home to find her playing basketball by herself bare-footed. She didn't even have to use the special shoe.

A track coach encouraged her to start running. She ran so well that during her senior year in high school, she qualified for the 1956 Olympics in Melbourne, Australia. She won a bronze medal in the women's 400-meter relay.

Then she sprained her ankle, but she ignored the pain and helped her team to win another gold medal for the 400-meter relay! In the picture above you see the three gold medals she won at the Rome Olympics.

She retired from running when she was 22 years old, but she went on to coach women's track teams and encourage young people.

Wilma thought God had a greater purpose for her than to win three gold medals. She started the Wilma Rudolph Foundation to help children learn about discipline and hard work.

She died of brain cancer in 1994. Even though she is no longer alive, her influence still lives on in the lives of many young people who look up to her.

porter
Pronunciation: 'pOrt-ər
Function: noun
1 : a person who carries baggage (as at a hotel)
2 : a railroad employee who waits on passengers....

Olympic Games
Function: noun plural
: a series of international athletic contests held in a different country once every four years