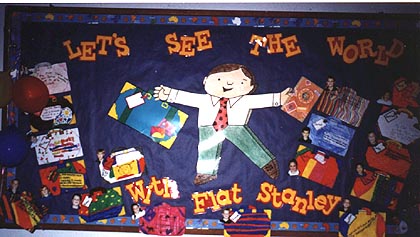 Everyone was excited. Flat Stanley had been gone for six weeks and today was the day he was coming home! The day started with a chapel service for the students and our many visitors in the gym. "Here he comes!" someone shouted. We were all prepared. We had balloons for him, a key to the campus and a proclamation in his honor. 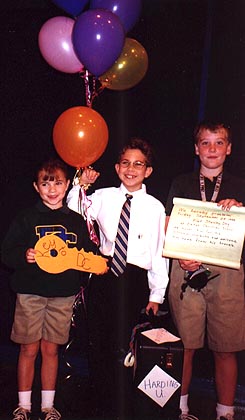 After chapel we went to our classrooms. We had almost sixty visitors; parents, grandparents, friends, and even little brothers and sisters. Each student showed his/her poster and told about Stanley's travels.

Would you like to look at some of our posters?

(Click on the small pictures to see a larger view.)

When each child finished, we put a dot on the state Stanley had visited. If it was outside the United States, we wrote the name of the country and put a dot by it.

It sounded a little like B-I-N-G-O and we loved it!
(Click to see the lyrics, if you have forgotten them.)

We had a picnic lunch outside and played on the playground.

That afternoon we toasted Stanley with hot chocolate, just like his family did in the book.
What a great day!

In 1914 a little girl was "mailed" to her grandmother when her parents could not afford to buy a train ticket for her. You will enjoy reading about this delightful story called Mailing May. Our teacher read the story to us in the classroom.

The featured song is "Down by the Station"
Thanks Maggie for permission to use it.

To view the lyrics for this song.