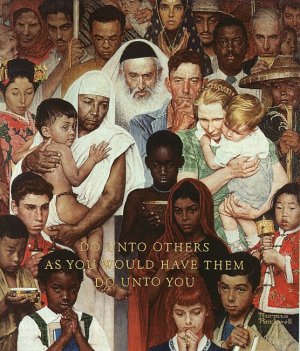 The featured work on this page is The Golden Rule. Norman Rockwell wanted to show that "doing unto others as you would have them do unto you" was something on which people of most religions could agree, regardless of their creed or belief. In the picture we see people of many nationalities.

Rockwell was born in New York City. When he was a boy his father would read aloud books such as Oliver Twist and David Copperfield. Norman would draw the characters as he visualized the events happening in the story.

He was a skinny kid and the other kids called him names. He tried to gain attention and make people feel sorry for him by limping. Norman was not athletic and could not play ball as well as his brother. He didn't excel in any sports, but he was really good at drawing. He quit high school at age 15 to study art. Every Saturday he rode the trolley and subway two hours to get to the art classes in New York City. In the city he visited art museums and studied the works of great artists. He earned money for tuition by delivering mail on his bicycle for 25 cents a day, giving art lessons, and drawing illustrations.

One of the first jobs he got was illustrating a children's book called Tell-Me-Why Stories He was paid $150 to do 10 or 12 illustrations for the book.

In 1912 he illustrated a handbook for the Boy Scouts and drew the pictures for Boy Scout calendars. He also drew illustrations for advertisements such as insurance, toothpaste, etc.

When he was only 19 he became the art director of Boy's Life Magazine. He was paid $50 a month and painted a cover and illustrated one story each month.

Back in 1728 Benjamin Franklin started the Saturday Evening Post magazine. Rockwell's greatest wish was to have one of his drawings appear on the cover ot that magazine. He drew some illustrations, had a wooden box built to hold them, and went to see the editor of the magazine. He was so nervous at the interview, but the editor knew Norman had an exceptional ability and hired him. The acceptance of these illustrations was the beginning of a long career with the Post.

The very first Post cover he drew was Salutation (Boy with Baby Carriage). This picture contains only three color because the early Post covers used only the colors black, white, and red. Over a period of 55 years he drew illustrations for more than 300 Saturday Evening Post covers, averaging seven covers a year. Each picture told a story. Most of them were humorous stories that people really enjoyed.

When drawing a Post cover he started with charcoal drawing and then he recreated it in color on a canvas, sometimes as small as the magazine cover and sometimes larger. The editor could reduce the picture size to fit the cover. He had models pose for the paintings. He would show them the expressions he wanted them to have on their faces. He always had music playing in his studio and the posing sessions were nearly always fun for his subjects. He paid his models $2 or more for sitting for him. He just paid his sons a dollar.

For 25 years he used live models. Later he posed the people and had a photographer take dozens of photographs. Then he picked out the best ones and made the illustration by looking at the photographs.

In Triple Self-Portrait he used himself as a model by looking in the mirror.

His pictures were so popular that when the Post would feature a Rockwell painting on the cover, they would print 250,000 extra copies just to meet the public demand.

During World War 2 President Franklin D. Roosevelt talked about "the four freedoms". Rockwell had an idea for illustrating these freedoms. He called it "the best idea I ever had". He used his neighbors as models and drew the four illustrations. It took him six months to finish the four paintings and Post used them inside the magazine with an essay about each painting.

He submitted them to government agencies and they weren't interested in using them. However, the editor of the Saturday Evening Post knew a bonanza when he saw it. He jumped at the chance to print them. After they were published, the U.S. Treasury Department used them to raise 132 million dollars in war-bond sales.

Here are the four pictures he painted in 1942 to illustrate The Four Freedoms. 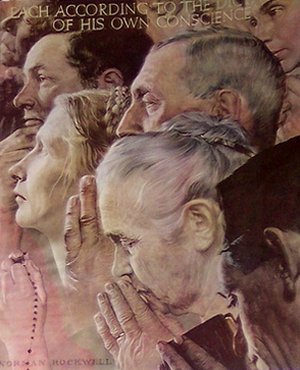 Freedom From Want depicts a family around a Thanksgiving table. 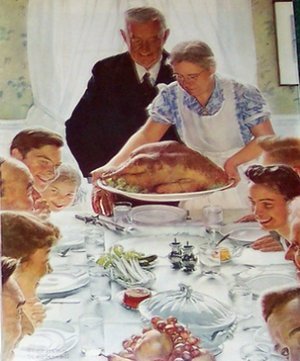 Freedom of Speech, features a man standing and speaking up in a town hall meeting. In the Freedom of Speech painting he put himself in the crowd. There is a small likeness of him in the upper left part of the picture with only his eye and ear showing. 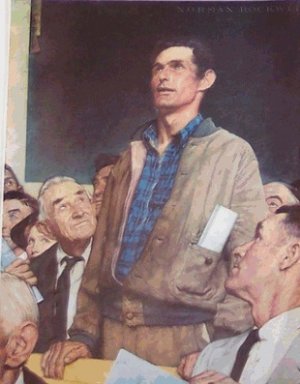 And Freedom From Fear is illustrated by a couple tucking their children into bed at night. 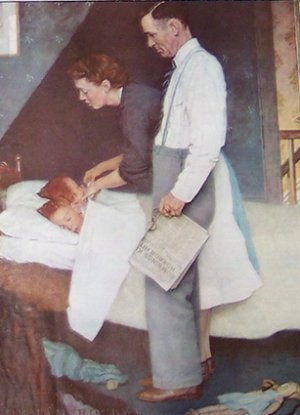 When illustrating Tom Sawyer and Little Women he returned to the original settings for the stories and sketched scenes in order to accurately portray the environments.

One time another magazine offered him twice as much money as he was making at the Saturday Evening Post, but he turned them down. Because of his loyalty, the Post also doubled his salary.

In 1920 America was engaged in World War 1 and Rockwell enlisted in the Navy. His duties consisted of painting portraits of naval officers, sailors, and officer's wives. The servicemen sent the drawings home to their families.

His first marriage ended in divorce, but in 1930 he married Mary Rhodes Barstow and they raised three sons, Jarvis, Tom, and Peter, who were each either an artist or a writer.

In his later years the pictures he drew were about national events such as the civil rights movement, and fewer were about the humorous side of life. He illustrated the young black girl who was the first to attend an all-white school. It was called The Problem We All Live With. He used Lynda Gunn as the model for Ruby Bridges the child being escorted to school by federal marshals. He positioned Lynda's feet on wooden blocks while she was posing to make her appear to be walking.

In one day he drew the cover about Charles Lindbergh's Flight He worked non-stop for 26 hours to finish it in time for the printing. The year was 1927.

In 1943 his studio burned destroying all his original artworks, paint, brushes - everything. He made a drawing about it which he called My Studio Burns.

He only painted one abstract art painting in his career and it was just a backdrop for his composition Connoisseur The man is trying to figure out the painting.

After his wife Mary died, he married Molly Punderson, a retired teacher. They were married seventeen years.

During his 65-year career as an artist he completed over 4000 works of art and painted pictures for 20 national publications. He once said he wanted to be painting when he died. Actually, he painted his last picture six months before his death, and it was an unfinished painting on his easel.

If you visit Vermont be sure to stop by the Norman Rockwell Museum to see some of his illustrations. 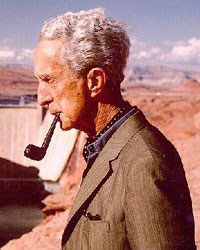 Norman Rockwell: behind the camera
by Ron Schick (Review, no preview)

Norman Rockwell: storyteller with a brush
by Beverly Gherman (No preview)


Credits and Solutions
Graphic, "The Golden Rule" by Norman Rockwell, 1894-1978,
courtesy of CGFA