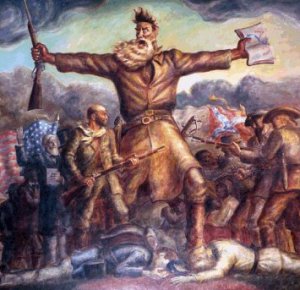 John Steuart Curry was born in 1897 in the state of Kansas. When he was 18, he left home to study art in Kansas City and Chicago. He made a living by illustrating books and magazines.

For eight months he studied in Paris, France. When he returned from Paris, he moved to Connecticut. There he painted "The Baptism". People were not painting about this subject at the time, but a wealthy woman saw it. She liked it so well that she told Curry that she would support him financially. Baptism in Kansas was an oil painting created in 1928. Notice the white robes of the other candidates for baptism. It is a large painting, 40x50 inches, containing bright colors and many details. He has included birds in the picture reminiscent of the dove which appeared at the baptism of Jesus.

Curry's painting Tragic Prelude is a mural painted in the Kansas State Capitol. It shows John Brown, an anti-slavery leader before the Civil War. In 1859 he was hanged for leading a raid on the arsenal at Harper's Ferry, Virginia. The state of Kansas asked him to paint the mural in the state house, but they didn't agree with his ideas for the pictures, and they asked him to stop painting it. He was very upset and wouldn't even sign the paintings that he had already finished. Nearly 50 years later, the legislature apologized and bought the drawings he had done.

In the spring of 1932, he traveled with the circus and made many drawings and did some paintings of circus scenes. Two of these painting are Circus Elephants and Baby Ruth.

When he painted Tornado Over Kansas some people in Kansas didn't like his painting of the tornado. They thought it would make people think that Kansas was not a good place to live. The house shown in the painting is the house where he was born.

Curry's watercolor Sanctuary shows the effects of a great flood in 1926 near Lawrence, Kansas. Animals caught in the flood have found refuge on a small hill in the flooded waters. 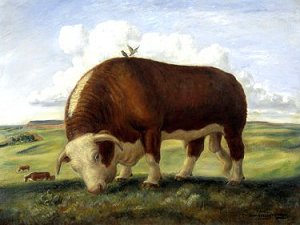 After he died in 1946, his paintings were removed from exhibits and people forgot about him. Years later though, they began to realize that he really had been a good artist and had a message for the people. His paintings began to be shown again.

The Line Storm
by Curry