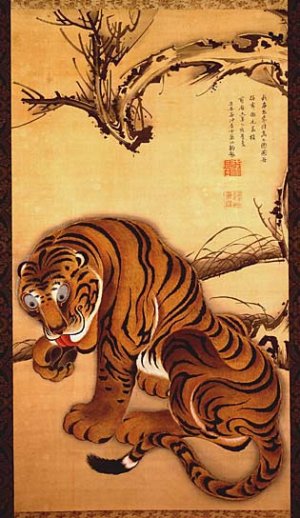 Permission to use image
given by Shin'enKan Foundation.

Ito Jakuchu was born in Kyoto in Japan. His father was a rich groceryman. The grocery shop had been in his family for four generations, and the family lived at the shop. He was 23 years old when his father died, and he inherited the business. He didn't really want to be a businessman, so after a few years, he let his younger brother run the shop, and he spent the rest of his life painting.

Jakuchu enjoyed painting pictures of birds, and in his garden he kept all kinds of birds that he could use as subjects in his paintings.

In order to learn how to paint, he copied Chinese paintings, perhaps thousands of them. Then he got tired of just copying the paintings of other artists and decided to paint what he saw. He would watch the birds and other fowl in his garden and then paint those animals.

When he painted The Tiger, he could not paint from a live model because there were no tigers in Japan, so he copied a picture that a Chinese artist had painted.

You will enjoy looking at the paintings of Roosters and Hens. The roosters shown are the Yokohama variety. These roosters had tails that could grow to be 26 feet long!

Jakuchu lived to be 85 years old and never married.

He did not enjoy fame for his painting during his lifetime. People only began to become interested in his works after he had been gone for a hundred years or more.

In the year 2000, which was 200 years after his death, the Kyoto National Museum featured a showing of his artworks.

Ito Jakuchu at the National Gallery of Art

How an American collector brought Jakuchu to Tohoku