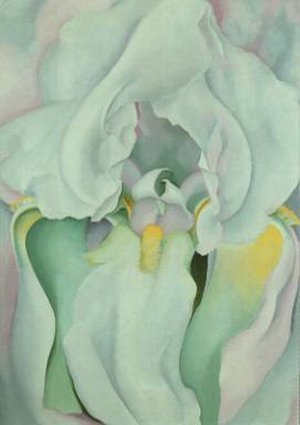 Georgia O'Keeffe was born in 1887 on a farm in Sun Prairie, Wisconsin. She knew from the time she was a young girl she wanted to be an artist. Her parents encouraged her interest and gave her lessons. She was one of seven children in the family, and the education of their children was important to her parents. Her mother had been educated in the East.

The family moved to Virginia, and Georgia took private art lessons for several years. When she was eighteen years old she went to live with her aunt and attended the Art Institute of Chicago. Next she returned to her family in Virginia.

She worked for a while as a commercial artist, then a friend told her about a job in Amarillo, Texas which she accepted, and she became an art supervisor in the public schools. She worked there for two years and in the summers taught art at the University of Virginia.

Her friend, Anita Pollitzer sent some of her charcoal drawings to a professional photographer, Alfred Stieglitz, who had a gallery called the 291 Gallery in New York. Stieglitz was impressed with her work, and without her knowledge exhibited ten of the drawings. She was quite upset when she found out he had exhibited them without asking her permission to do so. She went to talk to him and agreed to give him permission.

At one time she taught art at West Texas State Normal College in Canyon, Texas. (The college was later called West Texas State Teachers College and now is West Texas A&M University.) The college is near the beautiful Palo Dura Canyon where O'Keeffe did at least 50 watercolor paintings.

Alfred encouraged her to give up teaching and return to New York and become a full-time artist. She also modeled for him. This association began a relationship which would later result in their marriage. Her painting of New York Nightshows the view from their apartment in New York City.

Georgia O'Keeffe is famous for her paintings of flowers. She made them very large so they filled the whole canvas. She painted many kinds of flowers. You may have seen her pictures of poppies and irises such as the one featured in this lesson.

The scenes of New Mexico and the bleached cow bones she found there became the subject of several works. She found her subjects everywhere and saw beauty in objects other people might not consider beautiful. She saw possibilities in dry cattle bones out in the desert, in flowers, and the beautiful hills surrounding her in New Mexico. She put objects together in interesting ways such as Ram's Skull with Brown Leaves.

She would paint small things to look very large as many of her flower pictures and her painting called Red Hills with White Shell.

Sometimes her paintings would not look like anything at all, but just be impressions of color such as Blue Green Music

Her eyesight became poor in later years, and when she could no longer paint pictures in oil, she began to work with drawing pencils, watercolor, and clay. O'Keeffe lived a long and productive life. She was still active even into her 90's. She was 98 years old when she died. 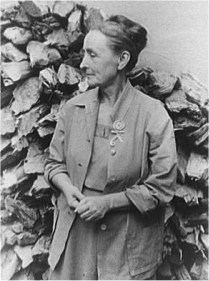 My Name is Georgia
by Jeanette Winter (selected pages)

Art projects by design: a guide for the classroom
by Del Klaustermeier (selected pages)