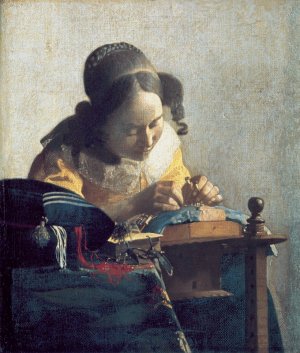 Johannas "Jan" Vermeer (yo HAH nus "YAHN" vur MEER) was born in the Netherlands in the city of Delft in 1632. His father was an art dealer, and through the early contacts with artists Jan became interested in painting. The majority of his work was portraits which he painted for people.

Many great painters lived in Holland including Rembrandt and Pieter de Hooch. This particular time in history was called the Golden Age of Art. People in Holland liked scenes of everyday life and Vermeer's paintings reflected this. These were genre (ZHAHN ruh) paintings. Earlier in his career he painted Bible stories and pictures about mythology.

He usually only included one or two people in a picture. He depicted people doing everyday things, and most of the settings were indoors. Women were his favorite subjects. He frequently had a window in his paintings. In our featured work "The Lacemaker" you can see how her handwork is illuminated by the sun streaming in through a window.(See examples of handmade lace.)

His painting Officer and Laughing Girl includes a map on the wall. During that time maps were very expensive, and to own such a map indicated wealth and education.

In The Artist in His Studio below we see a view of an artist painting in his studio. The map hanging on this wall is made of fabric. 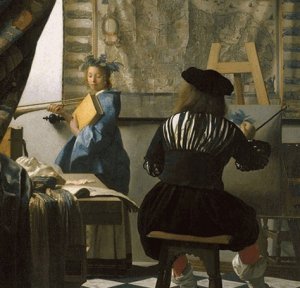 The Art of Painting (detail)
Enlarge

The second picture also has a map in the background. Notice the artist's use of light in this painting. The sunlight is streaming through the window and reflecting off the woman's white clothing and the shiny pitcher and bowl. 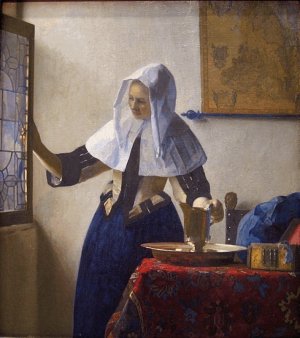 Some of his pictures feature a large oak table which belonged to his mother-in-law. He would move it upstairs when he wanted to include it in a painting.

Girl With a Pearl Earring is one of Vermeer's most famous paintings. The subject seems to be a simple girl, yet the pearl is very large and evidently of great value. The background is black focusing the viewer's attention on the girl. There is a film version of Vermeer's life "Girl with the Pearl Earring" based on Tracy Chevalier's book by the same name. In 1881 the painting Girl with a Pearl Earring sold for ten guilders which was a little more than what a man would earn in 10 days. 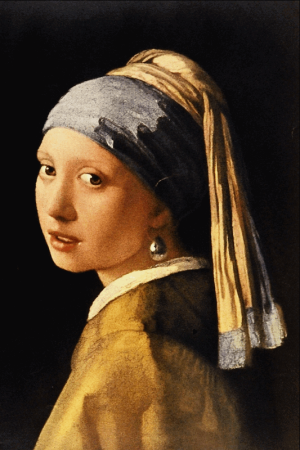 Girl With a Pearl Earring
Enlarge

Vermeer spent his whole life in the city of Delft. He painted a few landscapes. One of the most famous is View of Delft, his hometown. 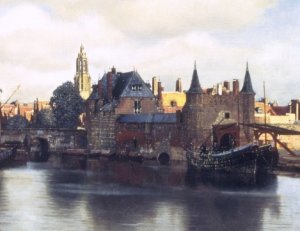 However, he is best remembered for his scenes of everyday life. He included props such as chairs, vases, and tapestries in his compositions. Many of them had a light source from a window with the light streaming in from left to right.

When he was 20 his father died and he took over the inn. In addition to his painting he was the landlord of the inn and tavern. When his mother died he inherited the inn. His art studio was at his home. He married Catherina Bolnes at age 21 and they had fifteen children. Four of them did not survive past childhood, but eleven of them grew up. The family lived with Vermeer's mother-in-law Maria Thins for some time. It was expensive providing for such a large family and there was always a lot of work to be done. Early on there was ample money and he lived above his means and incurred debt. Later when the government flooded their land to protect the country, the farm they owned was ruined. Vermeer himself was devastated, lost his health, and died in a very short time. He left Catherina a widow with ten children still at home. It was hard for her to provide for them.

Vermeer's paintings were not esteemed as highly as other Dutch painters during his lifetime. Maybe it was because he didn't paint very many pictures, only about 35-40, and because he didn't usually sign his paintings, people thought they had been painted by someone else. It was not until 200 years later people realized the importance of his work.

Essential Vermeer
many links to information about the artist

Other works by Vermeer

Web Gallery of Art
"The Love Letter"
(You can enlarge the picture by clicking on it.)

Books
Press "Go" to search for books about Vermeer.
Library

Vermeer's Lady at the Virginals
by Benedict Nicolson (full view)

Vermeer's Camera: uncovering the truth behind the masterpieces
by Philip Steadman (selected pages)

A Study of Vermeer
by Edward A. Snow, Johannes Vermeer (selected pages)

Girl With a Pearl Earring
by Tracy Chevalier (selected pages)