SELF PORTRAIT
WITH BANDAGED EAR 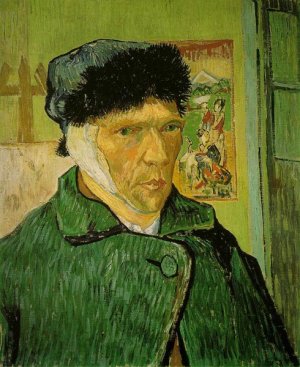 Vincent Van Gogh (van GO)* was born in the southern part of the Netherlands in a small village near the Belgian border. His father was a preacher and there were six children in the family. Vincent, the oldest, was a bad-tempered child. He was taught by a governess until he was 12 years old and then he was sent to a boarding school. When he left high school his uncle found him a job as a clerk at an art gallery that sold reproductions of paintings.

He fell in love with an older woman who was a widow. He pursued her to Amsterdam, but was rebuffed by her and Van Gogh was devastated.

He became interested in religion and preached some sermons. He took a course in theology, but failed it. He was not selected for support so his parents ended up supporting him financially. The committee reconsidered and gave him a six-month trial period. He preached in a coal-mining district where he dressed like the miners. He would not bathe and his behavior became so bizarre they did not renew his contract.

He lived the life of an ascetic and gave everything away. He would punish himself by sleeping on the floor of the outhouse rather than in his bed and he walked around outside in freezing weather without an overcoat. He would eat only bread and cheese even when more luxurious food was available for him to eat. He deprived himself, but he didn't like to see animals suffer. His friend Gorlitz recalls times when Van Gogh would spend his last few coins on rolls to feed a starving dog.

When he was 27 years old, he taught himself how to paint. He returned to Brussels and continued painting. When he was admitted to the Academy of Arts his teacher viewed him as a "dunce" and demoted him to the drawing class. He didn't last very long at the Academy.

Much of what we know about Van Gogh has been learned from his correspondence with his brother Theo, who was an art dealer. Over a period of seventeen years he wrote over 800 letters to his family and friends. Most of them were written to his brother. Theo faithfully preserved the letters he received from Vincent. He recognized his brother's talent, encouraged him, and supported him financially. He introduced him to famous artists who influenced him. Vincent was almost totally dependent on Theo for money. At one point he suggested Theo also become an artist with him. Of course, Theo needed to work at a job to support the two of them.

Vincent didn't get along with his parents. He wrote to Theo they regarded him "as they would a barking dog with wet paws, a 'foul beast' unfit for the house". He was at odds with his father all his life, but something happened once that helped to heal their relationship. His mother was in a terrible accident and Vincent cared for her for a long time after the accident. His father saw the love Vincent had for his mother and he loved him because of his actions toward his mother.

He went to Holland and when he departed from the town of Nuenen he left all his paintings which were either destroyed or sold for a few cents in the marketplace.

Some of his earlier paintings were done in watercolor. Later he started using oil paints. Sometimes he would squeeze the paint directly on the canvas and work with it there. He regularly painted outside. If the wind was blowing, grains of sand would stick to the paint and become a part of the picture.

One of his early paintings, The Potato Eaters, became one of his well-known works. He befriended a peasant family, the De Groot family, and they are the subject of the painting. The setting is almost cavelike and the colors are dark. In describing the painting himself, he wrote about how the people are eating the potatoes they planted and dug from the earth. He appreciated the fact they had honestly earned their food. This is the only picture he ever painted with a lot of people in it. One interesting note; the arms of the people are extraordinarily long and their facial features are emphasized. 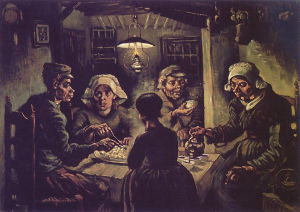 In the second picture we see two women digging potatoes. 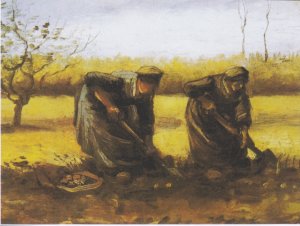 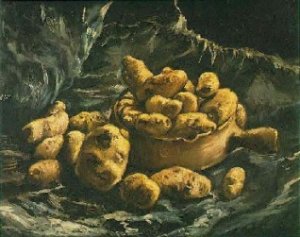 He showed up in Paris, Theo's home city, rather unexpectedly one time much to Theo's chagrin. There were no letters during that period so little is known about that time of his life. Other artists in Paris were impressed by his work, but it is not known whether he sold anything.

He moved to Arles in the winter of 1888. When spring came and the trees blossomed he painted 10 canvases in three weeks.

Sometimes his actions were violent and his neighbors were afraid of him. He had rented the Yellow House and Gauguin arrived to share the house with him. After a couple of months they began to have violent arguments. In one argument Vincent approached Gauguin with a razor, but Gauguin stared him down. After Gauguin left the house Vincent cut off his own left ear and took it to a woman named Rachel with the note, "Keep this object carefully".

Later he painted some pictures of himself with a bandage over his ear. Interestingly though, he had cut off his left ear, but his right ear was bandaged in the pictures. Do you suppose he was looking in the mirror and just painted what he saw?

He had been in ill health for a long time and the next day after this incident, which was Christmas Eve, he was taken to a hospital. Amazingly he recovered and returned home to do some of his best work of sunflowers and self-portraits with the bandaged ear. 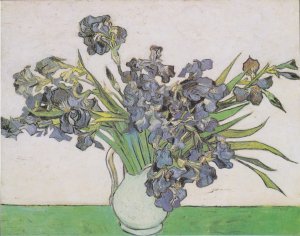 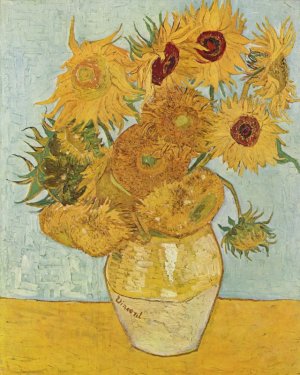 On February 7 he was again hospitalized after having delusions and hearing voices. He was ordered to a facility where he was isolated in a cell.

When he got out of the hospital in May Van Gogh committed himself to an asylum. There were beautiful gardens there. They gave him two cells, one for sleeping and one for work. In June he painted The Starry Night and Irises which he sent to the Salon.

He had attacks during which he could not work. Once when he was having such an attack he tried to swallow paint and kerosene.

Earlier when he had been living in Arles he painted L 'Arlesienne using his landlord's wife Mme Ginoux as the model. He made five paintings of the scene. During his time at the asylum they granted him release to deliver one of them to Mme Ginoux, but when he didn't return they sent an attendant to look for him. They found him wandering around lost.

When he finally recovered he moved to the country and Pisarro found a friend to keep an eye on him. He moved to Auvers and did some remarkable landscapes there.

His painting, Starry Night became famous, but he felt that it was not realistic enough. 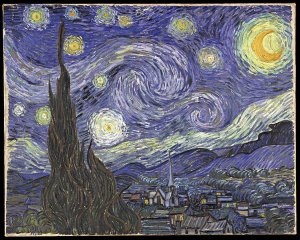 A year earlier he had painted another starry sky picture, Starry Night Over the Rhone. 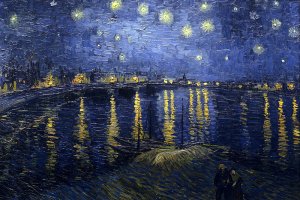 Starry Night Over the Rhone, 1888
Enlarge 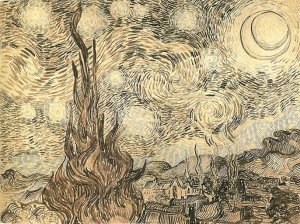 He loved children, especially his nephew. Even though he was a great artist, he never painted pictures of children to make them look like children. They always looked like small people with adult facial features. Two Little Girls and Child With an Orange.

Van Gogh had a good friend, a postman named Roulin. He thought of him as a father and said he had the wisdom of Socrates. Roulin stood by his friend when others thought he was dangerous. Vincent painted many pictures of the postman and The Roulin Family.

During his lifetime, he produced over 800 oil paintings and even more drawings. He liked to paint scenes from nature, and he tried to show the lives of the common people as they worked at their jobs.

Some say that during his lifetime he only sold one painting. It is a fact though that he would trade paintings for art supplies, and the dealers sold some of those paintings. He had no idea he would become so famous, but after his death people began to appreciate his work. One of his paintings sold for $82.5 million. That's the most anyone has ever paid for a painting.

The Bedroom is a simple composition done in bright colors. Each piece of furniture is outlined in black or dark brown to make it stand out. You do not see any shadows in the room from a source of light. He was so pleased with the way the painting turned out he made a copy for his sister and mother. 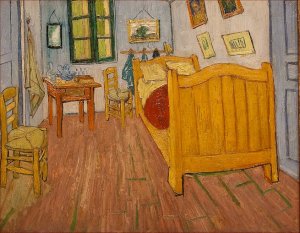 At Eternity's Gate shows an old man grieving. Van Gogh first did it as a lithograph in 1882 and made black ink prints. He made a painting of it in 1890 a few days before his death. 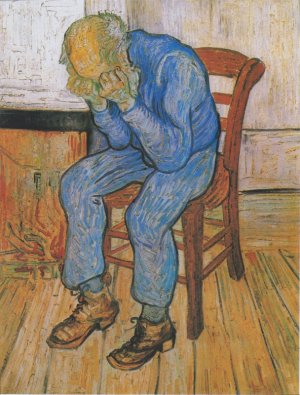 Van Gogh revered Millet as "the greatest of the greats". He copied many of Millet's black and white prints and painted them in color. He would make a grid on the print and create similar grids on the canvas and reproduce the picture in that way. See an example of this grid method. First Steps was a reproduction of Millet's First Steps. He made the painting and gave it as a gift to his brother Theo and his wife when they had a son. How are the pictures different and how are they alike? 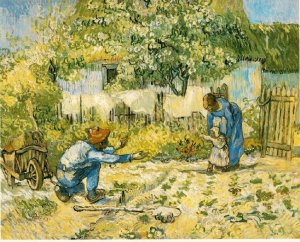 His life ended sadly in 1890 at the age of 37. On July 27 he shot himself and lingered two days before he died. Theo traveled from Paris to be with him. After Vincent's death Theo only lived for six months. Theo's wife Joanna translated Vincent's letters and made sure he would be remembered as a great artist.

In 1973 his nephew Vincent Willem Van Gogh presided at the opening of the Van Gogh Museum in Amsterdam.

Van Gogh and Gauguin
This presentation from the Art Institute of Chicago
includes an excellent slide show of works of the artists.

Oil Paint in Tubes (audio)
Engines of Our Ingenuity.

At biography.com search for Vincent Van Gogh.
Scroll the panel for the "Video & Audio Results".