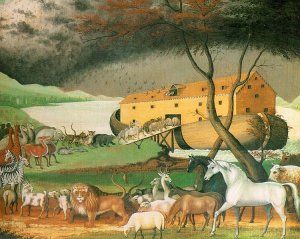 Edward Hicks was born in Pennsylvania in 1780. His mother died the very next year. After her death he was cared for by a slave until at the age of three he was found by Elizabeth Twining and taken in and raised in their Quaker family. His father promised to pay them a certain amount each year and he was never adopted by the Twinings. He didn't do well in school, so his parents decided he should work for a coachmaker. He enjoyed this very much and learned skills which helped him to become a painter.

He married and he and his wife Sarah had four children. At one time he became very ill, and as a result, he began to think more seriously about his life. He started attending the Quaker church.They believed in peace and brotherly love.

He was making a living as a coachmaker. He would paint signs and coaches, but he was interested in becoming a minister. He was a popular preacher. As he studied the Bible, he concentrated on the book of Isaiah. He especially liked the part in Isaiah 11 where the prophet wrote,

"The wolf also shall dwell with the lamb, and the leopard shall lie down with the kid,
and the calf and the young lion and fatling together; and a little child shall lead them."

He began painting pictures about "The Peaceable Kingdom". In fact, he painted at least 60, and some say 100 pictures with this title. In this version we see the children playing safely with the wild animals which are now tame and harmless. In the background across the chasm William Penn is negotiating a treaty with the Indians. 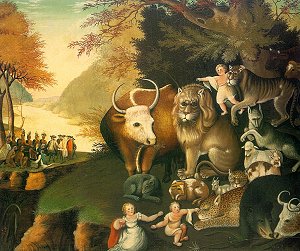 Edward Hicks made a painting of William Penn's Treaty with the Indians in 1847. He based his work on an earlier painting by Benjamin West. In 1771 Thomas Penn, William Penn's son commissioned Benjamin West to record the event with the painting. Compare the two paintings. How do they differ in style? How are the paintings alike? How are they different? 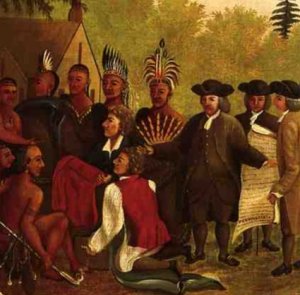 Penn's Treaty With the Indians by Edward Hicks
Enlarge 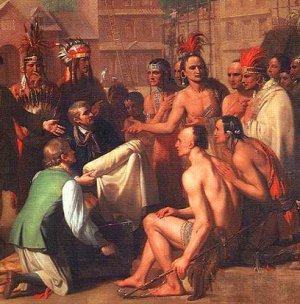 The Treaty of Penn With the Indians by Benjamin West
Enlarge

Edward Hicks was a self-taught artist and painted for his own pleasure and for people in his area. He became an art teacher later in his life and lived to be 69 years old. He painted The Cornell Farm in the last year of his life. He identifies it as "An Indian summer view of the Farm and Stock of James C. Cornell of Northampton Bucks county Pennsylvania", and he also states in the inscription that he painted it in the 69th year of his life. 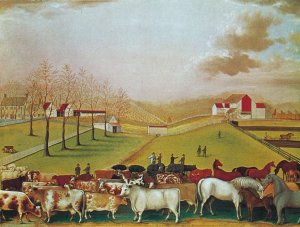 When Edward Hicks was just a little child he went to live with the David Twining family and 60+ years later he painted the farm as he remembered it. At one time years later the painting sold for $1,432,500. 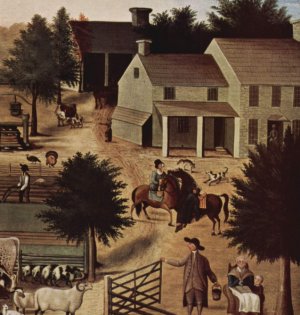 The Estate of David Twining
Enlarge

A few minutes after that sale a Peaceable Kingdom painting by Hicks sold for $4,732,500.

The story of Noah, which is the basis for our featured picture, can be found in the Bible in Genesis chapters 6-9.

Other Activities
View a slideshow about Edward Hicks

The Kingdoms of Edward Hicks
by Carolyn J. Weekley and Laura Pass Barry (Review, no preview)