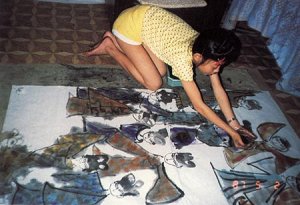 Wang Yani ( WANG YAH nee) was born in southern China. It is a beautiful country with mountains, rivers, and all kinds of animals.

Yani grew up in a loving family. Her father was an art teacher and a painter. He would take her to work with him, and she started drawing on the wall of his studio when she was two and a half years old, so he gave her some sheets of paper on which to draw. At first it was just scribbling, but by the time she was three years old, her drawings and paintings were realistic. They looked just like the object or animal she was trying to draw.

When she was four years old, her father gave her a pet monkey. After that, monkeys became her favorite subject to paint. She would make up stories about her paintings. Sometimes she would listen to music while she painted.

When she was eight years old, her father, Wang Shiqiang, gave up his career as an artist because he was afraid his style of painting might influence his daughter. He wanted her to develop her own style.

He took her on tours of many countries to broaden her experience. He was very strict with her. He said that he had to be strict because of her amazing talent and fame.

Her paintings are known throughout the world. She has shown her paintings in China, Japan, Germany, Great Britain, and the United States. The country of China even put one of her monkey paintings on a postage stamp!

You will enjoy reading more about Wang Yani in a book written about her. The name of the book is A Young Painter, the life and painting of Wang Yani, China's extraordinary young artist. It is written by Zheng Zhensun and Alice Low. 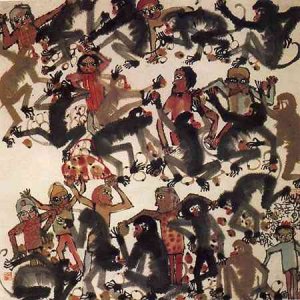 Books
Press "Go" to search for books about other Child Prodigies.
(A prodigy is a young person who is unusually talented in some way.)
Library

Yani: The brush of innocence
by Wai-Ching Ho (no preview) Order here


Credits and Solutions
Permission to use image given by Scholastic Inc.

The pictures come from the book, A Young Painter: The Life and Paintings of Wang-Yani,China's Extraordinary Artist by Zheng Zhensun and Alice Low.