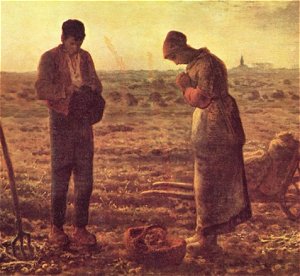 Jean Francois Millet (zhahn frahn SWAH mee LEH) was born to peasant parents in France near Cherbourg. He identified with simple working people all his life, and painted many pictures showing them at work. The people of his town recognized his talent and paid for him to study in Paris. However, it didn't work out too well because he had his own ideas about how to paint. He left and began to teach himself.

He finally sold a painting and was able to get enough money to moved to Barbizon, a small village near Paris where he spent the rest of his life. He was poor and had a meager existence, but after he died his works became valuable. He sold The Angelus for $100, but 15 years after his death it sold for $150,000.

In 1849 Millet joined three other artists, Rousseau (roo-SO), Corot (kor-OH), and Daubigny (doh-bee-NYEE) in starting a school for artists in Barbizon. They painted outdoor scenes in the open air.

Millet had been raised on a farm and knew the rural life. These early experiences influenced his art work as seen in his paintings of people working in the fields and in the forest.

The featured work on this page is The Angelus. To understand the painting we need to know something about the origin of the title. The Angelus was a Catholic devotion time. When the church bell rang, people stopped their work and said a prayer. This happened three times a day; morning, noon, and evening. In the painting we see the man and his wife stopping for devotion after hearing the bell from the church in the distance. Look carefully at the painting. What kind of work are they doing?

Before machines were invented farmers had to sow the seed by hand. The man carries a sack of seed around his waist and flings the seed in a pattern as he walks across the field. 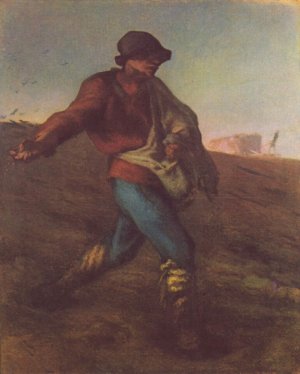 The next picture shows two men cutting a large tree into sections using a crosscut saw designed for two men. It takes a lot of time and effort to finish the tree. 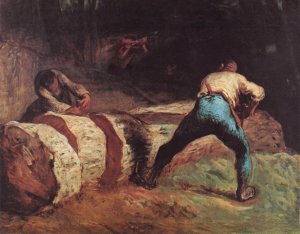 The third painting depicts peasants picking up grain left by the harvesters. During Old Testament times landowners were commanded to leave the grain that fell during harvest for the poor to gather. They also had to leave the corners of their fields uncut so the gleaners could pick up grain there. 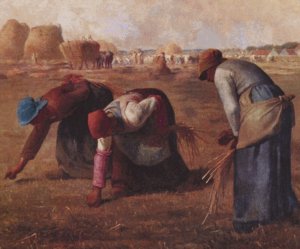 Some people accused Millet of being a Socialist because he portrayed the peasants in such a favorable way. They accused him of elevating the status of the working men and women and dignifying their labor.

Millet's influence was far-reaching. Van Gogh would copy many of Millet's works. His old friend Corot with whom he started the school was a great artist. Monet said of him, "There is only one master here - Corot. We are nothing compared to him, nothing".

Corot became rich as an artist, but he was generous. When Millet died Corot gave 10,000 francs to Millet's widow. 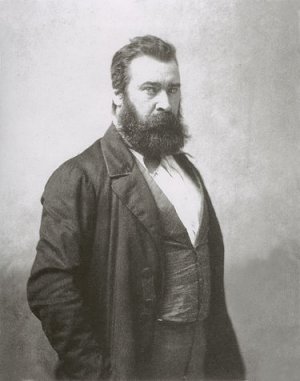 Portrait of Millet by Nadar

Other Activities
View a slideshow about Jean-Francois Millet

The Case of Grandpa's Paintings
art adventure from A. Pentura

The Angelus
by Millet

Jean Francois Millet: a collection of fifteen pictures and a portrait of the artist
by Estelle May Hurll 1900 (full view)