EDWARD VI AS A CHILD 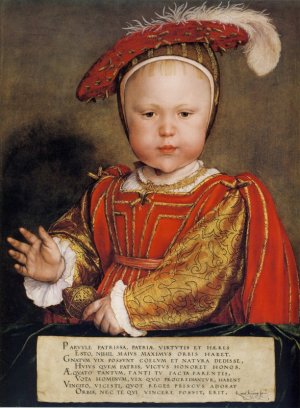 Hans Holbein (HAHNZ HOHL bine) the Younger was a German artist. He was the son of a famous artist. His father was called Hans Holbein the Elder.

Hans the Younger is famous for his religious paintings and his paintings of the royal family. Our featured painting is a portrait of Edward VI Prince of Wales. He was the son of the king of England, King Henry VIII and his third wife, Jane Seymour. She died shortly after the birth of Edward, and King Henry married again. In fact, he had a total of six wives and the last one outlived him. In the first portrait below we see Henry the VIII in full regalia. 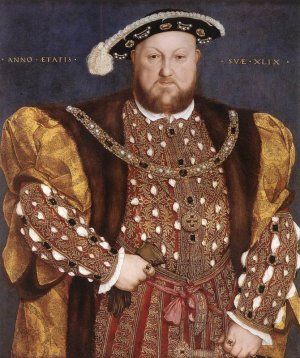 The Ambassadors records the meeting between his bishop Georges de Selve and the French ambassador Jean de Dinteville. The strange distorted object in the foreground is a grinning skull with the image distorted. Learn more about that image here in a picture which shows the skull correctly with the picture itself distorted, and here which shows the skull undistorted. What you see here is an anamorphosis, an interesting oblique view of the image. You can find out more about The Ambassadors here in our Art Gallery. 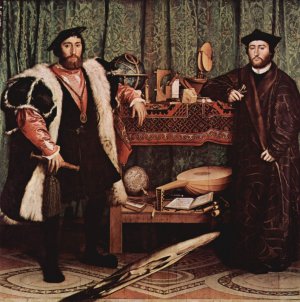 The third picture Noli Me Tangere (which is a Latin phrase when translated means "Don't touch me") is about the meeting of Christ with Mary Magdalene after the resurrection in which He says to her, "Touch me not; for I am not yet ascended to my Father". John 20 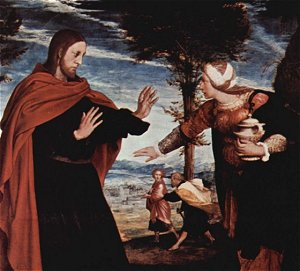 Holbein moved to England in 1532 and four years later became the court painter for Henry VIII. As the king's artist he was sent to foreign countries to paint portraits of women the king was interested in marrying. There were no cameras to record likenesses of people, so an artist was hired to do the job. Once when the pope forbade the king to divorce his first wife he just did it secretly and started his own church, the Anglican Church.

Holbein married the widow of a soldier in 1519 and they had four children. Her name was Elsbeth. Their son, Philip, grew up to be a gold and silversmith in the court of Emperor Maximilian. Hans and his wife lived apart for many years and she raised the children alone. She finally became so poor she had to sell the painting he had done of her and the children.

In his earlier years Holbein designed woodcuts and provided the illustrations for Martin Luther's German translation of the Bible. He also made stained glass and jewelry. He designed robes, buttons, and buckles for the royal families.

Hans Holbein died of the plague in London in 1543. 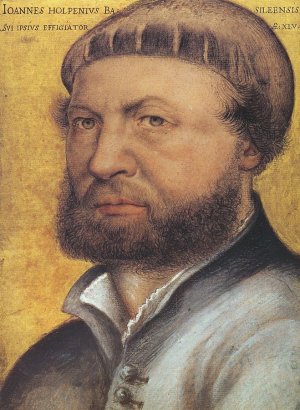 Edward Prince of Wales with a Monkey

Portrait of Henry VIII
painted by Hans Holbein the Elder

Hans Holbein the Younger: a guide to research
by Erika Michael (selected pages)