DUKE OF BERRY ON A JOURNEY 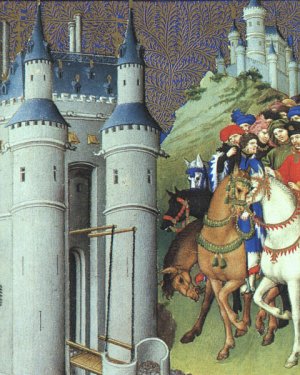 The Limbourg (LIM-berg) brothers were famous Dutch artists, born in the late 1300's. The oldest was named Herman, next came Paul, then Johan (or Jean) with a year or so difference in their ages.

Our featured work Duke of Berry on a Journey shows the illustration made for a prayer for a safe journey. In the picture we see the Duke on his white horse as he rides toward his castle followed by his friends.

Their father was a wood carver, or sculptor. He died when the boys were about 10-12 years old, and their mother sent them to live with her brother, their uncle known as Malouel, who was a painter. While they were in their early teens they were apprenticed to a goldsmith in Paris.

Two of the boys were captured and held for ransom when they tried to return to their home in Nijmegen (Nigh-may-gun). Their mother didn't have the money to pay, so Philip the Bold paid the ransom. Shortly thereafter he made a four year contract with the boys for them to illustrate a Bible for him.

Books in those days were rare and costly. They were one-of-a-kind books made by hand and illustrated or "illuminated" by beautiful detailed paintings. The Limbourg brothers became masters of this form of illuminating.

On the pages of the book which had words on them, the scribe, the person writing the text, would leave a blank space around the text. Then the artist would richly decorate the borders of each page with ornate filigree and designs. 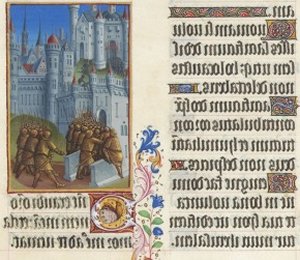 Attack on a City
Enlarge 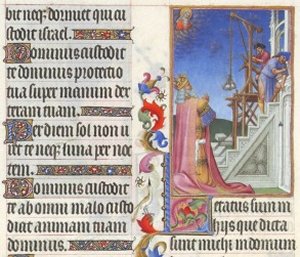 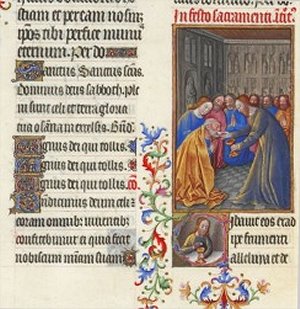 The Communion of the Apostles
Enlarge

When Philip died, the three brothers went to work for his brother, Jean de Berry. He wanted them to make paintings for a book called Book of Hours or Tres Riches Heures. Some say it may be the most valuable book in the world. The Book of Hours was a prayer book with prayers especially for certain times such as seasons of the year, months, and prayers for different days of the week and various hours of the day. It also contained a calendar. 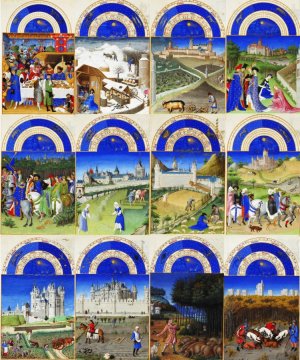 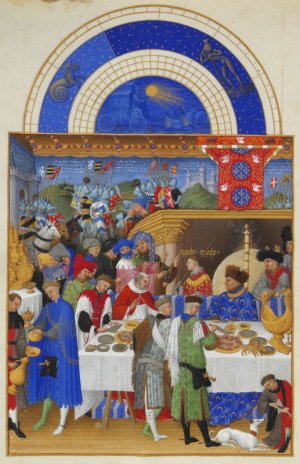 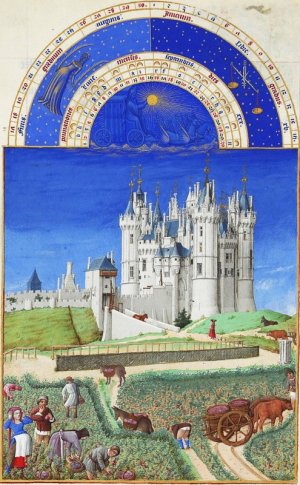 Today the original pages are in a museum in Chantilly in France, but people rarely see the original. The museum has copies of the pages on exhibit for people to see. 980 copies of the Book of Hours have been published. Each book of the Fine Art Facsimile Edition has its own number and is bound in the same way as the original.

The Duke favored Paul over the other brothers. He appointed him to be his personal servant and gave him jewels and a house. When Paul saw a young girl he wanted to marry, the Duke tried to help him. Her parents were opposed to the marriage. The girl, Gillette, was only twelve years old and Paul was twenty-four! They married anyway.

All three brothers died in the same year, 1416. They were probably victims of the plague, a disease that killed many people at that time. They had not completed the Book of Hours, but other artists finished the project.

These beautiful miniature paintings were lost and forgotten for hundreds of years, but were rediscovered in the 19th century. Another set of paintings by the Limbourg brothers, Les Belles Heures belongs to the Metropolitan Museum of Art in New York.

The drawing below by the Limbourg brothers is of the mocking of Christ at his trial. It was made with brush and light gray ink, as well as with pen and black ink. John 19 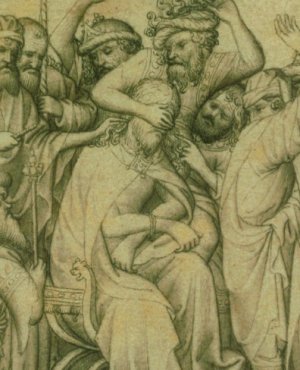 The Mocking of Christ (detail)
Enlarge

Books
Press "Go" to search for books about The Illuminated Manuscript.
Library

The Book of Hours in Life Magazine 1948
(full view) Order

Artists of the Middle Ages
by Leslie Ross (selected pages)

In the middle of the Middle Ages: integrating content standards and the arts
by Mary Wheeler, Jill Terlep (selected pages)